I'll just pick up where I left off:

We drove south. Option #1 was too low. Option #2 was full of more didymo than a port-a-potty after Chili Fest, and looked none more appealing. Option #3 was too windy. This was our last option. 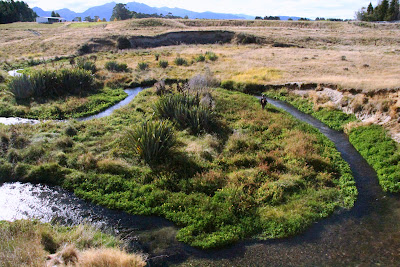 It was tight little spring creek that was full of spunky browns who aren't afraid to use every piece of cover to their advantage when fighting. 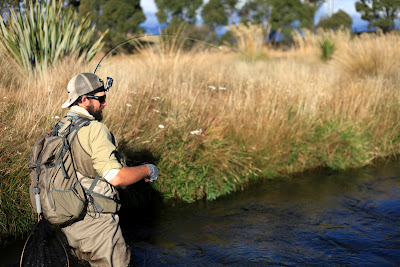 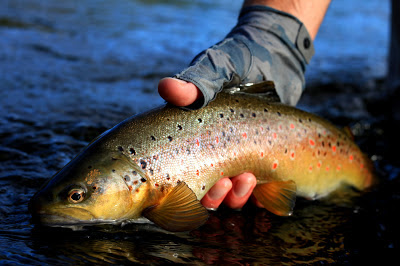 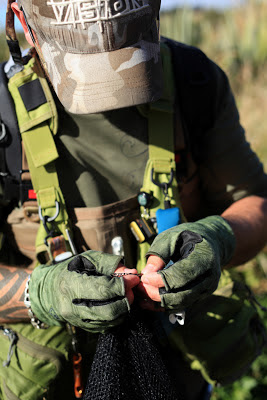 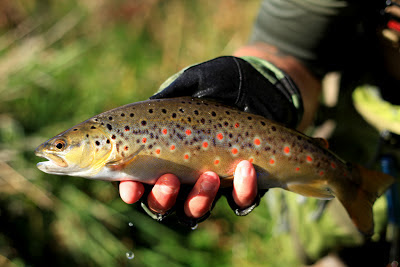 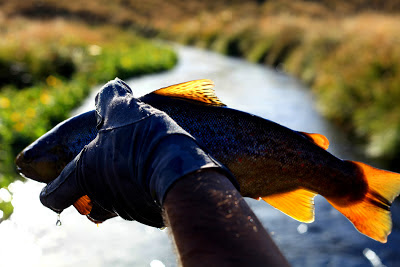 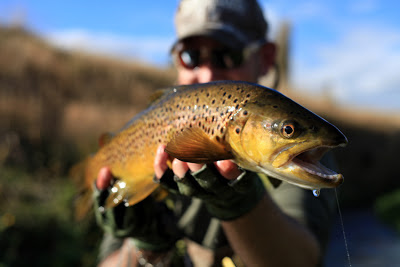 The following day we continued deeper into the rabbit's hole. 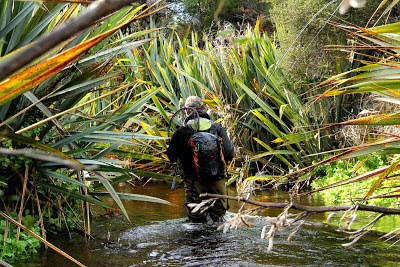 We soon ascribed it a new moniker, Improbable Creek. 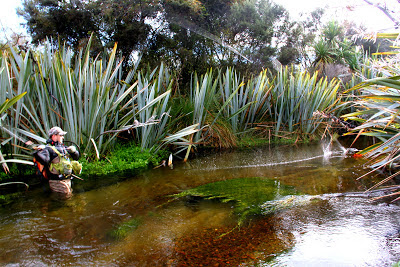 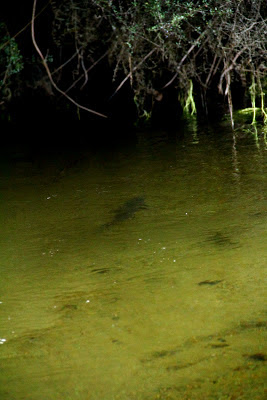 A fish came the middle of this bit, just off Lewis's right shoulder. 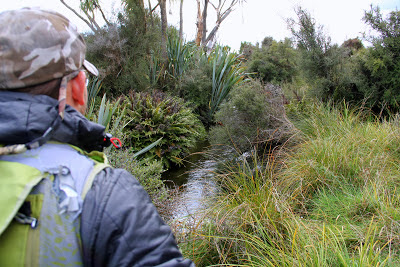 And he fought it underneath and through this bush. 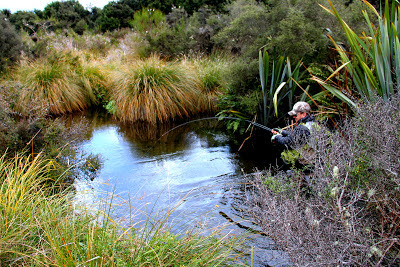 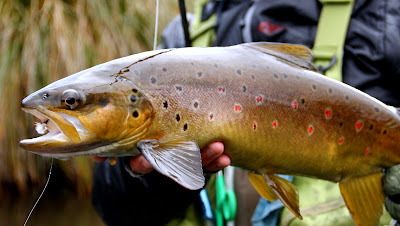 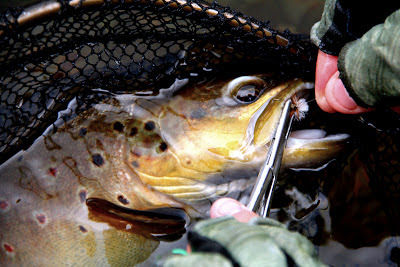 This one came while blind-casting, literally, over 6ft tall tussock! 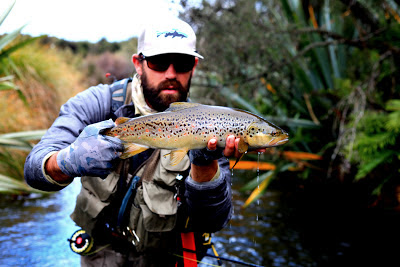 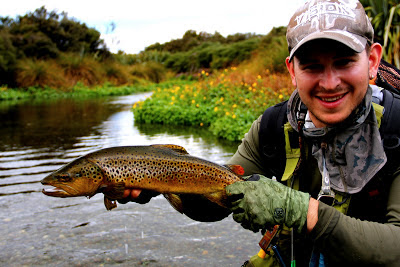 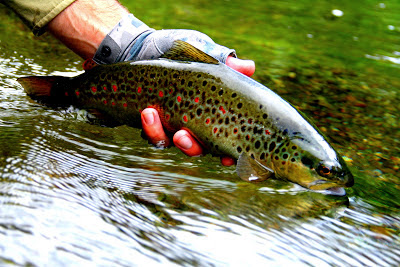 We then went back to the lake I'd mentioned previously. The surface was glass and the fish uninterested in anything in anything less than the most technical of presentations (think <18 on 6x). 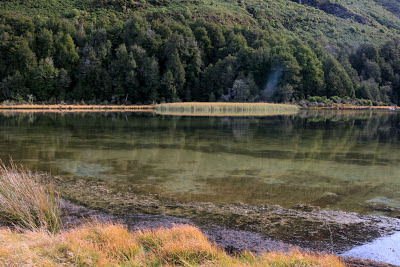 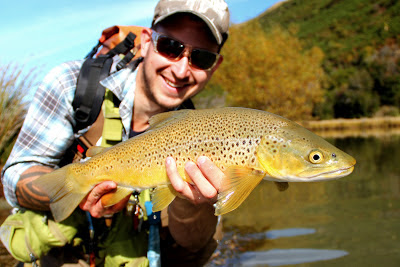 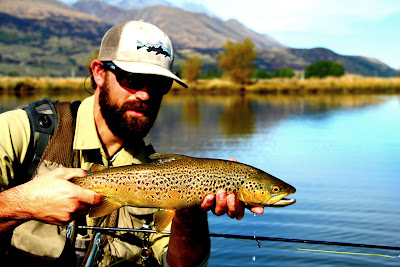 We then packed up and headed back.

I had one more chance to fish before I was back stateside. I went at it alone and was rewarded with one fish on a random blind cast. Fish number fifty. The last fish I needed. 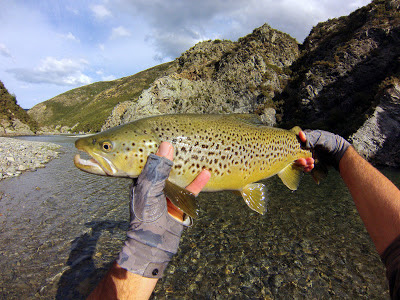 And alas, the sun has set on another New Zealand summer. 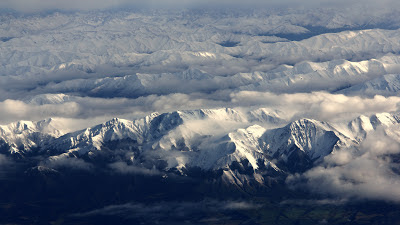 The cool creep of fall had finally settled in on the South Island. Though it doesn't necessarily amount to much by the way of harsh winters most places, it is a long and arduous transition into spring some months from now. With most rivers having closed before I left, I began to feel the restlessness of stale potential setting in. It's time to move on, time to get going. A few nights in Auckland enjoying a couple concerts by my favorite band helped to quell the unrest in my legs for a day or two, but the 24+ hours of travel following finished me off.

So here I sit back in Colorado reflecting on another winter well-spent, but also weighing opportunities anew. Stepping on that plane always leaves me heavy-hearted, wondering when or even if I shall ever see this land again that means so much to me. That is always the question and always the regret in leaving. I know not if I shall return, I only know that with the end of one journey thus begins another, especially for someone returning somewhere homeless and jobless. Keep looking forward, keep pressing on. For lack of sufficient alternatives I believe I shall be moseying eastward for a change. It's been a long while since I spent a summer in Maine, and though I regret not having fisheries work to occupy me out west, I do look forward to revisiting some long forgotten waters back there. Anyone fancy a fish?
Posted by Lucas "Horm" Young at 11:40 AM

That Creek looks like something out of Jurassic Park. I'm in Maine this summer and will be fishing like my life depends on it... let's get after it

The journey might be over but hell it's going to be hard to forget that trip my man. Beautiful pics as usual. You know where to find me when you're back in Maine and I expect a call

Man those red spots are unreal!

another great read and great pics to accompany. great stuff. opportunities abound my friend, not to fret. i have a feeling you've got some friends in vacationland that will gladly join you on the water. hope to see you soon sir.

That was another fabulous photo dump brother Lucas, welcome back stateside and thank you for bringing us along.