Unexpected Reunion on the St. Croix

Every year three other Bates alums (Will Coghlan '02, John Libre '02, and Tim Talbot '04) and I go on an extended canoe trip in Maine. It started four years ago on the Allagash, every year is a different river, and each year we are seemingly more excited to go on the trip. The giddiness usually peaks in the beer aisle of a Maine Shaws, where Libre and I employ the analytical mathematics that Bates teaches you well: how much alcohol do we need for four people over five days. Coghlan then yells at us, takes boxes of wine out of the cart, and then we put them back in when he isn't looking. In short, this is something we really look forward to each year, and there are the three basic hopes that anyone has on a trip of this nature:

This June we headed to the St. Croix, and with it being so fucking far away and us hitting the most-paddled river stretch during the week we figured we wouldn't have an problem with #3. But in previous years we had been incredibly lucky with all three, and going into the trip I think we were all wary that our luck might run out. After a thunderstorm forced us to shore on the second day, and we did the dam portage in the rain, we thought we were in the clear. 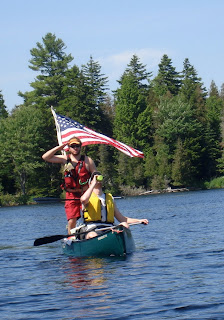 And of course immediately upon saying something to this effect, we pull up to our intended campground on the US side and find it infested with Canadians. Now, recent rule changes (thanks to US Homeland Security) state that Americans aren't allowed to camp on the Canadian side, and vice versa. So, we were pissed, and with the trip occurring in the middle of the World Cup and our Patriotism running high, we weren't going to be subtly pissed. Up went a giant American flag in the stern of our canoe, and we started dusting off our repertoire of patriotic songs. The point of this for the purposes of this story is this: we must have looked like total assholes to anyone paddling up on us.

The Canadians passed us early the next morning as we sat in camp nursing Jack Daniels-inspired (America, Fuck Yeah) hangovers and saying derogatory things about Molson products and Pat Sajak, but we figured that was it for seeing people on the river.

Fast forward 6 hours and as we're lumping gear around the class II-III Little Falls we see three boats coming downstream towards us. Our immediate response is: "goddamnit." Then no more than 45 seconds later as they pull up on us I hear: "Holy shit, is that Chet?" and I look up to see none-other than BFCer Sawyer Fahy pulling up next to me, along with three other guys from CVA, including another Batesie, Daniel Frost '05. Surprised hugs were exchanged, backs slapped, and beers consumed on the shore before my group ran the falls and headed downriver, and Sawyer and Co. set up camp for the night. We also shot the requisite Bates alum photo, which will of course be submitted to the Bates magazine.
They passed us the next morning as we were once again late out of camp, but later that evening, having hit the flat-water after the final set of rapids we started drinking what remained of the brown liquor, and realized that we'd likely pass them before we hit the final campground that night. By the time we pulled up we had managed to remember about 50% of the words to "America the Beautiful" and polished off the remains of a bottle of Knob Creek and Jack Daniels, and figured we would say hello before continuing on downriver. And then while Sawyer was telling us that the next campsite was full Tim managed to fall out of our canoe and into the water, and it was decided that we would be staying with them for the evening. I say 'it was decided,' but really the credit goes to Sawyer who looked at Tim drying himself off and said something to the effect of "you boys should probably stay with us tonight."

After tents were pitched and dinner consumed the eight of us started passing around a handle of Cutty Stark that went down quickly as we tried to remember the words to more patriotic songs, and then as John aptly puts it in this video, we participated in "one of the more patriotic instances [we've] been a part of" as the eight of us sang the national anthem to the flag still hoisted in the stern of the canoe.

So please doff your caps and stand for this stirring rendition of the Star Spangled Banner, and may all your future run-ins on rivers be as enjoyable as ours was:

Let me just say that when the BFC gets together, fish get killed and people get drunk.

hahaha..Chet, your rendition of this story when I saw you in NH did this no justice. Love it