As in , there are places in where you can get way the hell off the grid and into some big fish if you are willing to put in some effort. Every so often, these adventures turn into misadventures and, as we all know, result in bogged down vehicles, sudden storms, map mixups, hairy water crossings, banjo music, the list goes on and on…Many of you have experienced these less fortunate trips with me and although they suck at the time, I like to take something away from them and learn from the misadventure. Poseidon is fair and compassionate and if you are willing to pay your dues every so often in the form of misadventure, he will grant slay-fests of the most epic proportions.

2 weeks ago, runoff below the Teton, Wind River, and Gros Ventre Mountains had pretty much ended and with the clearing waters, Luke Hasselbeck (Bates ’09), myself, and another Jacksonian ski buddy had our sights set on big fish. Anyone who has even glanced at fly fishermen magazine in the last few years will know that the and surrounding high alpine tributaries and lakes can offer some of the best consistent trophy brown fishing around. This fact was hammered home and a date set for the trip after a brief chat with Alex Hernandez (’09.5) who told glorious tales of lakes in that same region he had successfully fished a few years ago. The drive over Togwotee pass and into Dubois and the Wind River area is considerable but as we all know, when you’re jacked up on an adventure, the little voice in your head tends to stretch the truth on how long travel time actually takes in an attempt to rationalize poor planning.

Tuesday arrived and we were in pretty good shape headed out of . Fast forward 3 and half hours and we’re sweating the planning a little bit after getting stuck behind a pilot car on a 30 mile construction project over the pass. An hour later after a food stop in town and we’re at the start of a jeep trail that looks more like a logging road on the map. Another hour later and we’re 10 miles down the jeep trail, near the starting point of our intended hike. A hike that, on the map, looks like a quick 3 mile jaunt down a gradual mountainside into the lake inlet. In reality, the descent went straight down rock slide gullies cut off halfway down by a 60 foot cliff band. Sometime in the late afternoon and still miles away from our destination, I found myself clutching the base of a sole sage brush jutting out from the mountain face just above the massive cliff band when“fuck this shit” became the group consensus…New plan: climb out, drive back along the 10 miles of jeep trail with half a dozen river crossings and fish the Wind River along the highway to salvage the day. Over the next couple hours the wind increased to sustained speeds which made casting impossible and we drove home with only a few plinkers to show. Though we were beaten and disappointed, we agreed the day was not wasted. From the North canyon rim of the lake inlet where we had been stranded, there was a visible route of descent 4 miles across the lake on the South side and down to the inlet and what looked like another semi-accessible jeep trail on the map that could bring us to that point.

One week later Luke, myself, and Mike, the twin brother of our third party member from the previous week were at the South canyon rim looking down into a doable 1400 foot descent 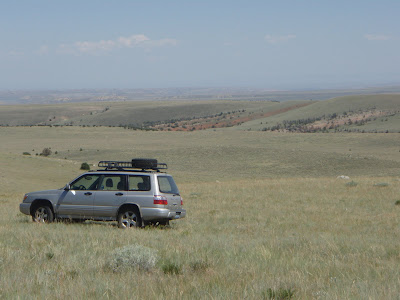 driving with a handheld compass 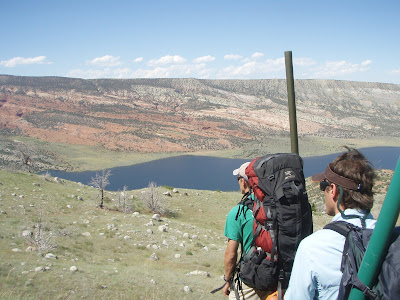 The new plan was an overnight at the lake inlet, camping beneath the sandstone cliffs that ended our trip the week before. Though we ran into a few snags again- more cliff outs, grizzly tracks and scat, a brief lightning storm, unrelenting mosquito clouds, and slow fishing to start, we ripped into some nice fish on streamers in the dark (size 4 to 6 Zoo Cougars, Sex Dungeons and Rusty Butt Monkeys) and some unforgettable browns on monster hoppers and small pale morning dun spinner patterns after a mayfly hatch. The second time around, we had success with some bruisers up to 21”. Solid, but none of the eye-popping whoppers of lore tucked away deep in the that reveal themselves only to the most persistent angler. Goin back in August. 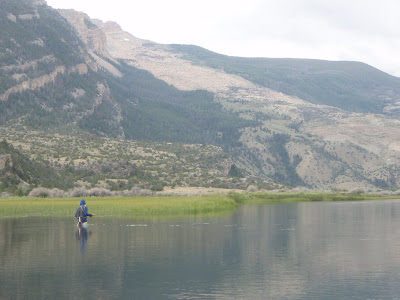 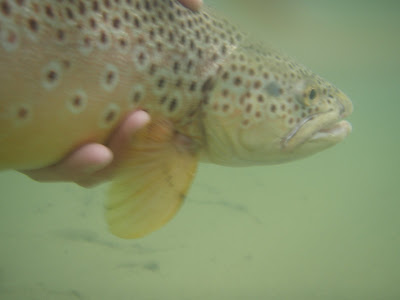 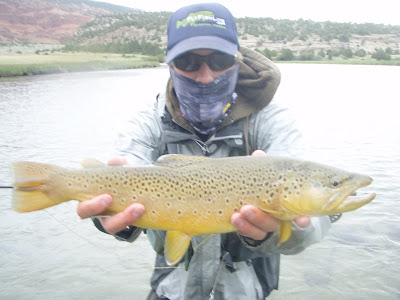 Chris, this is what this blog is all about bro. I remember a trip not so many moons ago when we set out after a night at the bars at Sugarloaf with Clark when the trip turned completely sour with raging downpours, a stuck jeep, and a night of setting tents in the rain. I learned a lot that night, and by the sound of things you learned quite a bit on your first attempt at this water. Now you've got it pinned down, and I'd wager that future trips will produce the hogs that you are seeking. Sick Brown, and an epic story. Love it.

Also, edit your post at the bottom so it is categorized. ie: brown trout, taking names, fishing, etc..

haha yea that trip was in the back of my mind the whole time on our first strike out mission to the Wind River. I will never forget that night of packing up cold cuts in a drunken blur and slaloming around animals on logging roads in the dark of night. classic.

if you or anybody else from the east coast contingent can maek it out here this summer, let me know. As far as I know, Robbins might be coming through here in September or October. Lets pull the trigger on something

Terrific read Morrell. Not only interesting in subject, but very well written. Glad to hear persevearence paid off.