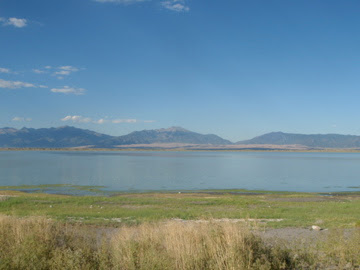 The excitement an angler can get when approaching a foreign water is great. A foreign species, the same. Guide's day off is still Saturday and three of us headed into uncharted territory for all of us: sight fishing for lake carp. Our head guide had put the fire in our heads, so we burned rubber east from the ranch, our destination the San Luis Lakes.

We approached the lakes like children on Christmas morn. The information we carried with us was this: go to the north side of the lake, use stoneflies or woolly buggers, find the carp, put it in front of their heads and slowly strip, then when the line goes tight, hold on. Fair enough, here we go... 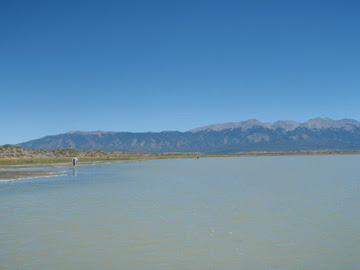 When we reached the lakes, we continued along a dirt road that looked like it went to the north. It did and we reached a locked gate where we assumed was the best place to get to the north shore. The environs around us were, in a word, weird. We crossed several hundred yards of what I'd describe as desert, to find a 200-plus acre lake that was three feet deep all the way across. The water was a light tan color and when we started wading, we quickly lost sight of our own feet. We then knew that sight fishing would be tough. Across the lake loomed a fourteen thousand foot mountain. Abutting that range are sand dunes! We were seemingly on a different planet. 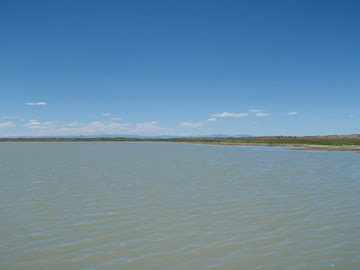 We laughed hysterically as none of us had any idea what to do. It was as foreign I have possibly ever felt in a body of water. One guy went this way, the other that way and I in between the two. nearly an hour passed before yells came from Drew. I ran down the shoreline to investigate and sure enough he was hooked up. He excitedly detailed to me what had happened. He had spotted three carp and put a fly in front of one and it took. And then he ran. Far away. Into the backing he went. 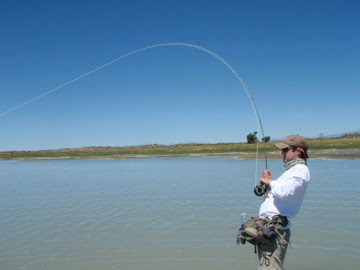 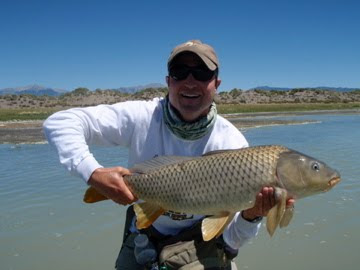 So we were on the board. Confidence soared as Drew and I stalked together. Then I spotted my first carp. They were tough to see in the murky waters, but they were certainly there. I think I spooked/botched my first attempts but continued on, roughly forty feet from the shore. Sure enough I spotted another one. Two casts later I was tight. Into the backing he went. Twice. A good NJ later and I picked up my first carp. What an odd looking thing! 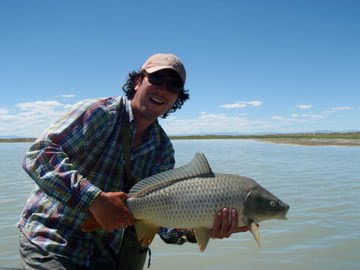 As the day went on, sunlight was sporadic, and we were all at a loss at how to continue. Drew and I had both landed two at this point, but it had been a while before anyone's line was tight. Boone was yet to pick up a rubber lip. We discussed tactics and were seemingly at a disagreement as how to continue. So I started casting. And caught another! Blind fishing it would be. Shortly after, Boone was tight. 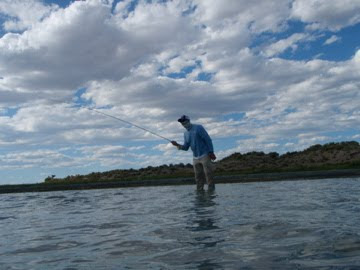 And then hoisted up the ugly thing. 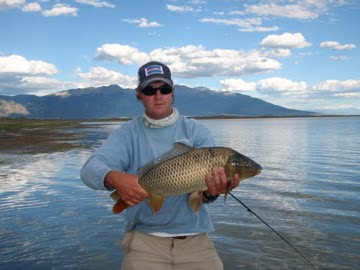 So we ended the day with seven in the net. I have more than once discussed the thrills one can find when entering new waters with little information and then having success. I believe there are many things a guide can teach an angler that they might not learn by themselves. Any decent guide knows their water well. Ask Wilkie to talk about the Magalloway or the Dead. Ask the Captain to talk about Cape bass or Canyons yellowfin. Those two know their waters as well as anyone I've met. A good guide is priceless. But every now and then it's good for an angler to step into unknown waters and see what happens. There's carp in them waters!
Posted by Jesse Lance Robbins at 9:05 PM

Hahaha...Robbins, your fish seems to be quite errect in the dorsal region you saucy bastard. I was in need of a new blog post, and am about to post one of my own. Glad you beat me to it, this was a wonderfully odd outing.