Memorial Day comes around but once a year, yet it promises high quality fishing opportunities and ushers in the dry fly fishing season often in bold fashion. Fishing on Memorial Day weekend is never really a question, its understood. This year proved no different than any other for Robbins and myself; once again we were on the water in search of northern Maine's Salmon and Trout.

Jesse met up with me at my place after we both squeaked out of work a bit early on Friday. Our destination was Upper Pierce Pond where we would rendezvous with Jesse's dad and an assortmant of characters from Jesse's past.

The trip to Upper Pierce was an annual one for the Robbins family & friends, and while it was my first time joining this particular crew, I figured we all had a common goal in mind and after a few beers and a meal around the campfire, I was sure that we would all be old fishing chums.

Jesse and I arrived at around 9 p.m to a lifeless campsite devoid of fire. An old army tent and a parked pickup truck were the only signs that anyone had even recently visited the site. Our initial thought was that the crew was out visiting other sites potentially throwing back brews and spinning yarns of years past. We cruised down the dirt road to a few other sites and met a few folks that invited back for a drink later on, but we did not find any of the 15 or so characters that we were had heard would be joining us for the weekend.

We returned to the campsite and sauntered into the army tent, three heathens (or "heevens" as our friend John Mitton would say after several whiskeys) were all that we found. Jesse's dad stepped out of the tent and discussed his afternoon and evening of fishing......windy conditions & no fish. A disappointing report from a fine fisherman. Jesse and I grabbed a few beers and headed off to consume them with our newly met campsite neighbors down the road. We returned to our tent an hour or so later slightly drunk yet hopefull for the days ahead of us.

Saturday morning we rose early, grabbed a sip of coffee and headed for the water. Soon we had the canoe gliding along the lake's windswept surface pointed toward our destiny.

Dry fly fishing proved nearly impossible on Saturday morning as the winds churned up a steady chop and any legit hatches were non-existent. In short we had no luck and after 5 hours of fishing we returned for brunch.

As I cooked up breakfast sandwiches for the Robbins' and myself, we sipped beer and discussed the afternoon ahead of us. There was little time for overthinking the conditions, we needed to think outside the box . We hastily finished our brunch and headed for the water, beers in tow, for another round.

With the wind still problematic, we headed for a secluded cove which held promise. It wasn't long before we noticed mayflies emerging on the surface of the cove's placid waters. With no fish rising to snatch the large flies from the surface, we held out hope that the bite would soon be on. 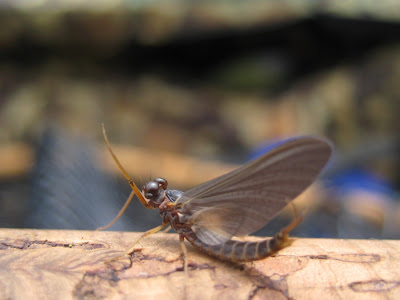 Robbins and I both were rummaging through our extensive fly collections looking for the perfect fly. Again and again I switched up until finally a quality 17" native Brookie exploded on my size 8 Orange Sure Bet, a wet fly with a conehead that was recently created and named by Selene Dumaine. I had tried this fly dozens of times before with little luck, but today it got the skunk out of our 15ft. Old Town Canoe and sent our spirits soaring.

We decided after another hour or so to head in for a late lunch and to compare notes with the others. Apparently we had struck first and the group was happy to hear that everyone's slow start might be making a turn around. After a half dozen beers and some more food, Robbins and I returned to the water at around 6:30 p.m in hopes of a fabled "night bite". 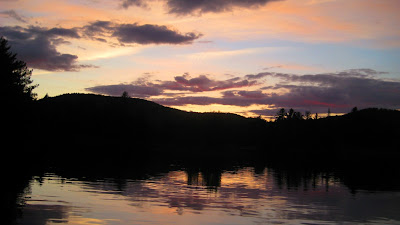 As the sun was setting around 7:45 we still hadn't hooked anything, nor had we seen any major blitz of fish. The handful of rises we had seen seemed to either disappear as we approached, or would be put down all together by our flies as we made a presentation....frustration was building.

The sputtering of a motor nearby caught our attention as we noticed our campsite neighbors had run out of gas just across the lake. I suggested to Jesse that we run over and offere them a cup or so of gas so they could get back to shore. I could tell the man wasn't stoked about the idea of wasting valuable fishing time since the light was creeping ever lower on the horizon. The guys were happy as we approached to offer them gas, they had been out all day with no luck and were throwing in the towel. They offered us several cold Coors Lights, which we gladly moved into our beerless canoe. As we talked with the two guys I could feel the fishing tension that was onboard my own vessel, I bid the gents goodbye and pointed Robbins and I in the direction of the few rises we had seen in the past hour.

As we approached the narrows we slipped deeper and deeper behind the island. First we spotted one rise, then two, then a half dozen.....the fish were here, it was nearly dark, we readied our weapons and began offering.

Moments later we were into some of the fastest Salmon action I can remember. Jesse struck first with a nice 16" fish and I struck next with a 19" fish, both put on epic aerial displays. Darkness eventually overtook us and we retreated to the campsite fired up about the evening's action that almost never happened. 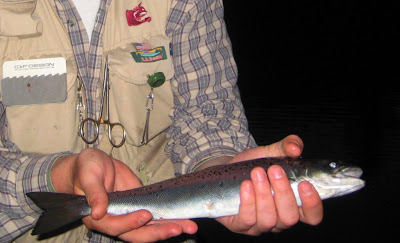 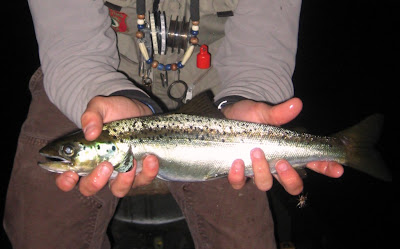 The next morning we got on the water early again and managed a few more small salmon. I departed around lunch for my Dad's birthday and Jesse stayed behind with his family. From what I am told, Jesse got into a few more fish later on Sunday and had a stellar salmon pull some acrobatics and throw his hook after an epic run that took him into his backing.

I think that Robbins would agree.....its tough beating dry fly season in Maine!

Posted by Andrew Wilkie at 6:17 PM

it's always a little overwhelming taking off onto a windy pond with no rises, or chance of seeing one. only thing you can do is start fishing, i suppose.

after you left, the wind died and fish were rising in the day. the salmon i lost was in similar fashion to the one on the dead, except his run was away, not directly at me. two big leaps and he tossed the fly, a sz 16 parachute adams. later i stung a real healthy 18" brookie on the same fly. that one found the boat. watching my line run, dad said i foul hooked a smaller fish. ha!

also, that picture of the mayfly is sick