I received two reports on Thursday and Friday suggesting that the tuna bite was pretty non-existent east of Chatham. Based on the slow outlook, I asked the crew if they wanted to stay inshore and bass fish. The crew indicated that they were willing to take the risk of a skunk for the potential solid tuna hookup and we agreed to head east Saturday morning. The plan was to meet Friday night at Zachary’s and head out at 3AM. We would have a crew of five; Greg, Sam, Jeff, Wilkie and me. Ice, beer and gear was readied for departure and the crew headed to Zachary’s for some required fishing preparation. The Zachary’s move had a couple potential positives. 1. Women dance naked there, and 2. We always tend to have good luck when fishing after a Zachary’s trip the night before.

After our fill of mediocre strippers, we made our way home, for a couple hours of sleep, first stopping at the Mobil On the Run store for some late night grub. This would prove to be a critical mistake for one crew member. One bag of beef jerky and some combos later, Critchlow was setting the alarm and we were passing out for a couple hours of low grade sleep. I woke up to Greg “The Legend” Smith waking me. It was almost 330. Somehow, we had slept in. Critchlow later admitted to turning the alarm off when it sounded at 245. Not good. Down at the docks, Wilkie reported that the On the Run chili nachos that he ate only hours earlier had him on the toilet all night. He would not be able to join us. This was a bad start to the day. We quickly mobilized and we’re off the dock by 330 but unfortunately light was already showing at the edge of the horizon. 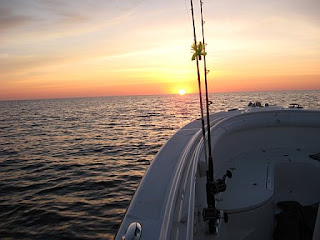 With flat calm seas, I revved up the twin 250s and had us heading east at 40 mph, trying to make up lost time. We cleared the point at monomoy in record time and dropped in east of the crab ledge in 230 feet of water. Unfortunately, most of the life around the ledge was mammalian in nature. Lots of big gray seals and just a couple of humpback whales. Knowing that this was not the life we had hoped for, we pushed east and watched as the temp gauge climbed to 65, then 66. There were several boats working the area immediately south of the BC buoy. We elected to push southeast along the eastern edge of the shipping lanes away from this group of boats. As the sun climbed higher, so did the number of beers consumed. We trolled for several miles working slicks where groups of petrels worked to no avail. As the beers began to take effect, the crew made the decision to throw in a dip. I was on the fence about this at first, having not dipped in over five years, but I made the decision to go for it. This moved proved successful. Almost immediately after inserting the Skoal, Sam spotted a splash. Was he hallucinating? We’d all had at least 8 beers at this point. No. Out of the corner of my eye I watched a tuna shoot out of the water! We had located fish. 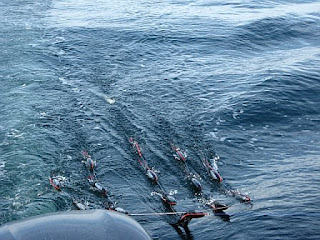 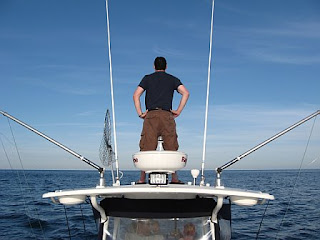 Over the next two hours we had tuna along a 3 mile stretch of water. We watched as tuna slashed under birds just on the edge of casting range and again and again we trolled over them without any interest. Morale decreased. The tuna were clearly here and they were not interested in our offerings. I switched up the spread and sent a couple subsurface offerings back on the short riggers. We continued to troll up and down the line of waypoints as random tuna crashed around us. There could be only one solution for this blatant disregard for our rigs, we had to get more messed up so that we didn’t care as much about the frustrating tuna. With that, we threw in another dip. At this point, I was pretty messed up. Watching the spread closely I saw what I thought was a swirl behind the pink bar on the long rigger. Staring back, I watched a tuna crush the bar. The outrigger clip snapped and the drag on the tiagra 50 began to wail. “Fish ON” I yelled, and our drunken crew jumped into action! 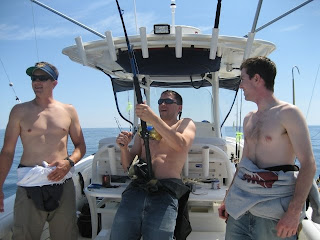 We kept the boat in gear as the tuna torched 200 yards of line on its initial run. Once the lines were cleared, I realized I had forgotten the fighting belt and harness back at the house. Damn me for drinking too much the night before and sleeping in… This would be a serious battle without the harness. We rigged up some cushioning using sweatshirts and foul weather gear and started Sam out on the fish. After a few minutes, it became apparent that without the fighting harness all three anglers would need to work in shifts to get this fish to the boat. As we blasted the stereo, we worked this fish slowly back to the boat and within a half hour, I had sunk the gaff into a 110 pound tuna. Not as big as I expected after that scorching initial run, but not bad all things considered. We had not heard any indication over the radio that other people had caught fish. The crew celebrated with more beer. 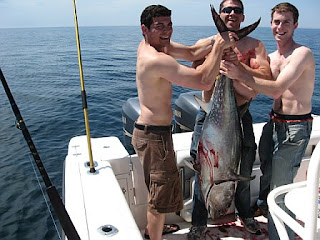 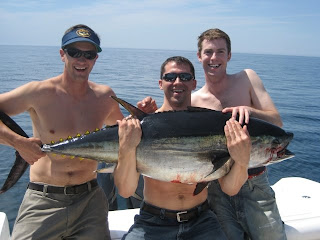 hell yea. i can't wait to hook into one of those tuna beasts. let's not forget the t-shirt idea of the topless lady bull-riding the giant tuna.

keith, dipping only gets better my man.

also, critchlow is jacked; he lifts that tuna with ease.