On Monday, I checked the tide chart as the end of the work day neared. The pm high tide was at 4:50, low at 10:30. My few outings at the Spurwink River, just north of Higgins Beach in Scarborough, last year yielded a decent number of fish, but I still don't feel as though I know the area well by any means. Truth be told I am a trout man at heart, but Poseidon and the salt still call my name, and they did Monday as 5:00 rolled around.
Remembering that my best luck last year for schoolies in Maine had taken place in low light and on the outgoing tide, my arrival to the beach could not have been timed better. I arrived around 7:00 to a quickly receding tide. I rigged up with a chartreuse clouser and a larger minnow imitation that I made up and which had given me my nicest schoolie of the season in Maine last year.

I have yet to acquire a stripping basket, and after this outing, I will be doing so soon. I also realized that I had failed to bring a headlamp, for operation in low light and I also failed to toss my Leatherman into my vest. Forgetting the latter item might not be a bad thing, I thought to myself as I walked down the beach toward the river, as it often works out that when you don't have a camera, you catch fish and when you do, you don't; similarly, when you do have a net you don't catch fish; when you don't, you do, etc., etc.

The current was quick and steady and I made casts at upstream angles and directly across the river, bringing my flies back in with different retrieve speeds. All the while, I was slowly walking downstream, towards the meeting of the river and the ocean. I noticed large schools of tiny, 1 - 2" baitfish along the edge of the river as I made my way. The sun was slowly making its way down in the sky when the mosquitoes started to come out. One item I did remember, my little bottle of Ben's 100, was in my vest and I rolled my sleeves down, put some Ben's on my hat, shoulders and wrists, and continued on. I had been fishing over an hour when frustration began to come and I realized that I hadn't caught any fish, or seen any, or had a strike, for that matter.

As the sun went down, the bugs came out in full force. All of a sudden, the two-fly rig I had been tossing without problem became problematic, and every 10th cast or so I had to untangle the two flies. Mosquitoes surrounded me, biting my hands whenever I did not move them for a second. Every few minutes or so, I would feel one bite my shoulder right through my shirt. Cursing didn't seem to have an effect on them, nor did more Ben's.

I was nearing the river's entrance to the ocean when I spotted two other fly fishermen. They were both equipped with stripping baskets and headlamps. I watched them closely as I made my way towards them and the ocean. Soon, one was hooked up. I could not see the fish from my point of view, but it was a fairly lengthy fight, and I could tell that the man was measuring the fish when he finally brought it in. He released it then resumed casting. I was fairly close to the other man when he too hooked up. His headlamp flicked on when the fish was at his feet and he released that one as well. I had been fishing for almost three hours and it had become rather clear to me that I was doing something(s) wrong.

Accepting defeat, I reeled in, then walked up to the closest angler. I introduced myself and picked his brain for a while. The fish he had caught was 25" and fat; the fish his buddy landed went 34". I realized these two had secured the best spots for fishing, and as I was fairly pissed off and starving, I made the trek back to the car. Humbled, but perhaps a tad wiser, I left Higgins and was treated with a sub-par Blue Canoe dinner on the way home. As I drove, I remembered... Poseidon Giveth, and Poseidon Taketh Away. 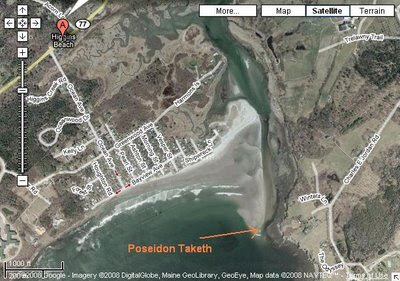 Nice post Jesse. You will slam them next time.