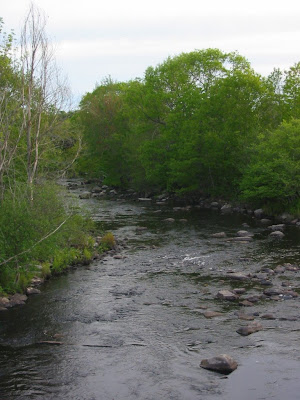 A novice in the way of the fly, I had the privilege of being invited to fish the St. George with Jesse "Old Man River" Robbins. Our car ride up from Brunswick was fueled by DIP, Mountain Dew and a well stocked Ipod. Arriving to Searsmont around 7 PM Jesse and I got in two good hours of fishing. There was a hatch in progress and Jesse caught three sexy little trout. My single hook up was less than solid but we decided to consider it 1/2 a fish. I was then treated to a home cooked meal at the Robbins house and some of the best strawberry-rhubarb pie ever baked in New England. After dinner we made the journey into Belfast and had a few PBRs at Rollie's, meeting some locals and a old flame of the Old Man. The night concluded with a well rolled spliff. 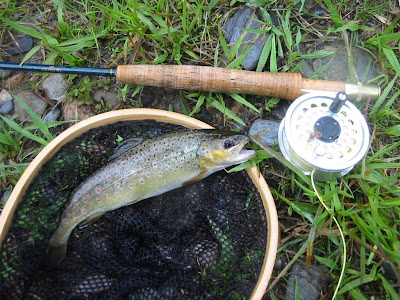 The next morning we returned to the St. George. We were greeted by grey skies and steady rain, but the fish were jumping and we followed suit. Fishing in pools above and below the bridge near the Robbins Lumber Company (no relation I am told) we used a few different dry flies until we found the pattern of the day, the Elk-hair caddisfly. Jesse pulled in trout left and right. I was introduced to the local flora, along with many of my flies. Never giving up hope and having a native of the river to encourage me I caught my first trout on a fly rod. It was beautiful. I left the St. George satisfied and fully addicted to fly fishing. Thanks Jesse. 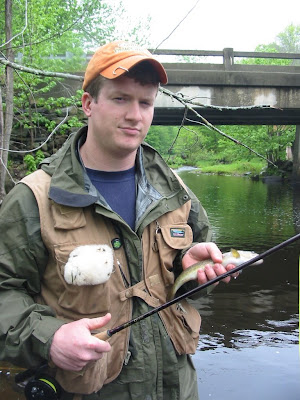 Posted by Patrick Lyons at 4:53 PM