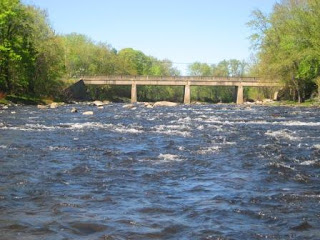 Its been a weekend of beer drinking and little sleep. Pangs of jealousy lingered with me throughout the weekend as I was forced to miss a quality Cape outing as a result of a graduation shindig I had promised to attend. Needless to say the party was mediocre at best and when I woke this morning at 6 a.m in the back of the 4-Runner in the streets of Farmington, I assesed my options for the day. I was hungover for the second morning in a row and I had to piss as bad as I could ever remember needing to before. As I threw on my pants and stepped barefoot into the street I noticed the cool smell of a cloudy morning. Despite how physically poor I felt I couldn't shake the thought of the rest of the guys casting to blitzing Stripers. A quick call to Lane proved that they were indeed on the water but had gotten a later than expected start (due to some alcohol related activities the night before no doubt). As I pulled into our driveway I was seriously contemplating gathering up my gear and getting on the water. Molly headed straight back to bed and I boldly perked a pot of coffee and slugged a concoction of Vitamin C, Advil, and water. In a groggy haze I gathered up my weapons and headed for the Sandy River.
With the Sandy essentially running through my backyard I often overlook it. I certainly hadn't given it as much respect this season, and my curiousity had peaked on Friday night when I had seen trout pegging the surface in a wild frenzy. I cruised to the section of river where I had witnessed the activity on Friday but the fish would not cooperate. After spending countless minutes snagged on trees behind me, and losing a half dozen flies I decided that a move was necessary. On the long slog back at the vehicle my hangover made its best attempt at putting an end to the expedition, but I was dead set on landing a fish.
As I pulled up to the River at my next stop, the sun was slowly working its way out and it was approaching 9 a.m. I figured that I was probably done for but had to give this bit of water a once over before throwing in the towel for good. I fished the west shore for an hour up and down the 300 yard stretch of rapids with only one strike coming at a most inoportune moment.
Frustrated but still not defeated I moved to the east shore and began dredging the lowest point in the rapids. Two casts with a green beadhead wolly bugger put a quality14" Brown on the line. 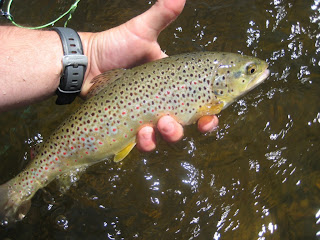 The Sandy River skunk was off, and in the morning sun I managed a solid fist pump and a big smile. This beauty was promptly followed up by a rock solid 4" yellow perch that nearly emptied my 200 yards of backing; thankfully I turned him just before he got to the bend in the river.
I started to slowly work upstream on the east shore and was surprised by this 10" Brookie. 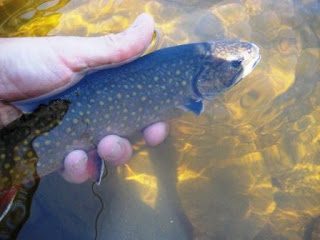 With renewed confidence and a receeding hangover I switched up to a white bugger and continued upriver. Several casts later an absolutely epic strike was followed by not only a solid hookup, but an aerial demonstration from a healthy 17" Brown. The fish came out of the water a half dozen times leaping and thrashing for all he was worth. I always forget how powerful a good sized Brown Trout is. I've always said that pound for pound a Rainbow puts up the strongest fight, but after this battle I was left wondering. 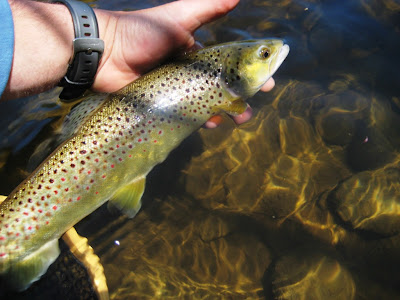 Tired and hungry, I walked away from the river satisfied.

dude, that last brownie is indeed a solid hookup. the white wooly bugger strikes again. i'm assuming the first spot you hit was the one you mentioned to me when you were looking at some land? guess we'll be fishin again this weekend.

i added a couple 'labels' to the post so we can keep them organized as we go. we'll be talkin