Went to Crystal Lake in Gray after work today. My co-worker Paul had picked up a rainbow and a brown there a couple weeks ago, so we strapped a canoe on top of his truck and made the trip over. Check out the license plate. 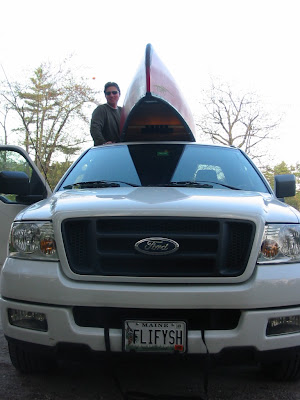 We tied on a couple smelt patterns and trolled down the western shore of the lake, where he got his fish earlier, casually paddling and looking for rises, as some bugs were on the water. We came into one cove, and sure enough, saw a rise. We put some streamers over him, but no luck. I put my floating line on and tied on a size 16 parachute Adams, watching for another rise, but couldn't find one. 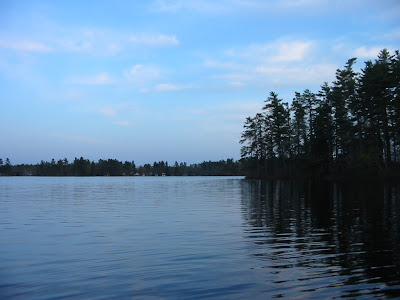 We trolled back up the lake towards the landing and looked for more rises. I said to Paul, "Well, let's wait and see if another fish doesn't come up." Ask and you shall receive, said Poseidon, and then came another ring on the water. We were on the trail, stalking this one now.

They were cruising and I wasn't able to get in front of him. We waited it out and then, ten minutes or so later, another cruiser came up. We paddled hard and got into position. I put a cast in front of him, but he went down for good. No solid hookups. That was the last rise we saw in the evening.

That was the first dry fly I have tied onto a leader since last fall. Stalking rising trout I think is one of the funnest ways to fly fish for trout. This one got lucky. In two weekends, I'll be putting dries in rings on Pierce Pond. Yeehaw!
Posted by Jesse Lance Robbins at 9:48 PM