There's a pond in western Washington that a buddy told me about.  It's small, 15 acres, and has one access point.  The put-in is the exact minimum diameter to turn a truck and trailer around in, and dump the boat in.  It reminds me of ponds in Maine and it doesn't feel like Washington there.

Once, a good buddy from England was visiting for work and we fished the pond together.  We were planning to go steelheading, but it had rained a lot and the river blew out.  So we went to this pond; neither of us had been there.

If I remember correctly, I missed a strike or had a follow on my first cast.  In this instance, that was exactly the sign of things to come as we had quite a day of catching.  We didn't count, or I don't remember the count, but I do know we were at 20 in short time.

Eventually we tired of catching them in on streamers, so we rigged up a dry fly stick.  We had seen a few rises, but couldn't make out any bugs on the water.  We took turns, one guy fishing, one guy rowing the boat slowly down the shore, and we worked structure and drop-offs.

A fish rose within range, under some overhanging trees.  My buddy took his shot and his fly landed in the branch.  Gently shaking his rod, the fly fell out of the tree and landed about where the fish had rose.  The fish rose again, and took the fly.  We laughed, landed the fish, and switched seats.

Once settled, I started working the same area.  I made several casts but nothing happened.  We agreed to move on but before we did, my buddy suggested I take a shot at the same spot he had just caught his fish in.

I made my cast and it too landed directly in the same overhanging limb.  I too shook the rod gently and the fly fluttered out of the tree onto the water.  Another fish rose and took it.  We caught eyes, exchanged a telepathic agreement that we should try this method another time, then switched spots again.

But we could not repeat it.  Specifically, my buddy seemed unable to cast into the tree!  Perfect cast after perfect cast onto the water, he pulled them all back and tried to put that fly into that limb again, but after some number of tries, he shrugged and motioned further down the bank.  We carried on.  Have you ever had that happen to you?  You're trying to make a very specific cast, and you try and try again, and you just can't get it quite right, so you give up, for a moment, on actually trying to catch a fish, and only on that one very specific cast you're trying to make and you either finally make the cast, and feel good about it, or you never make the very specific cast, and you just basically surrender, give up and move on, but 'moving on' actually means just returning to fishing, which is totally fine and good anyway, so your failure to make the very specific cast doesn't bother you very much, but only a little.  Has that ever happened to you? 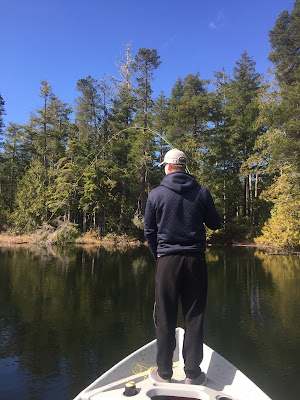 Posted by Jesse Lance Robbins at 1:02 AM

A great read. That sounds like a pretty solid spot. I hope we can fish it some day.

Regarding super specific casts, how many times have you made a wicked shitty cast an gotten a bite? Plenty I'm sure. And how many times have you made the absolute perfect cast to watch your fly drift through the perfect stretch of water without a rise? Plenty of times as well. When you think about the numbers, it kinda makes you want to redefine what's a good cast versus what's not.

Fuck that. I know a good cast when I see one...

i read your whole article. I felt much pleasure after reading your article. Thanks for sharing it. summer waves pool reviews