I do not fish as often as I'd like to these days. But when I do, it's nice to catch something.

Yesterday I drove down to the cape to grab my fly rods out of the basement so that I could prep my gear for fall steelhead. I made the last minute decision to throw the waders and the Sage 3 weight in the car and to make a quick stop at the salt run brookie creek by my folks house. This turned out to be a good decision. I had only fished the creek once before during the month of April. It was productive, I think I landed three fish that day. Even then it was pretty overgrown though, so I wasn't sure exactly what I was getting myself into, now that summer growth was at its peak. But I figured what the hell.

It was 40 degrees when I walked out to the car in Arlington and started my trek to the cape. I decided fairly quickly that And One basketball shorts and flip flops might not have been a wise attire selection. After arriving at my destination I walked along a path that parallels the creek before finally swinging a right and bush-whacking into the woods. By the time I reached the water, I was covered in spider webs and various clumps of vegetation. Bank shrubs and overhanging trees and deadly sink hole mud greeted me along the 3-5 foot wide brook. After wrestling around with trying to cast from shore for several minutes, I had a feeling that I had bitten off more than I could chew. This creek was basically unfishable. Wading around along the edges produced a thick black mud that clouded  the water and invariably spooked anything down stream within casting range. Disappointed, I decided that my only chance was to work my way downstream until I could find an area with some space to cast.

I pushed through the brush alongside the creek for maybe 10 yards before I became completely mired in a mud pile caused by some sort of secondary water source flowing into the main body of the creek. Desperate, I worked my way back into the creek for no particular reason other than to escape the muck. With a desperate final push, I lept into the stream, with quite a splash I might add, happy to be free of a potentially debilitating situation. I found myself almost waist deep, and I paused to catch my breath, letting the mud run off my boots and waders... After about 20 seconds of standing there questioning my next move, I noticed that the bottom of the creek was pretty much pure sand, so I decided that I could make my way down stream by walking down the main body of the creek. When I found a more castable location, I'd pull out on the bank and fish it. Seems reasonable right?

So I began the highly atypical move of walking straight downstream in the middle of the creek I intended to fish. But I did notice that the sand bottom in the middle of the creek was fairly forgiving. After about ten yard I reached a spot where I could get a mediocre back cast in, enough to get the fly 4 yards away from me down current, and then I could let line out and roll cast it directly down stream. I kept stripping line to get the fly as far away from me as possible... When I finally had it 12 yards down current. I slowly stripped it back in. I got hit on my first cast. Unfortunately I missed him. But it didn't really matter because I now had a plan. I waded down the river fishing it from the dead center of the stream. Cast down current, let out line, retrieve, walk 3 yards downstream, repeat... I never left the river again, with the exception of scaling a couple fallen trees. In an hour and a half, I made it about a quarter mile down and landed 9 native brookies to 11 inches. I missed another 20, presumably because many were to small to eat my streamer, It was kind of lights out. I landed 2 males that were particularly handsome. They were definitely getting ready to spawn. 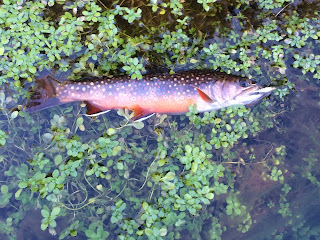 Quite satisfied with my morning, I drove down the street to my folks place. I decided to run the boat for a bit since she hadn't been off the dock in a couple weeks and I finished up trout fishing earlier than expected. As I was playing with the electronics out in Vineyard sound, I saw a few splashes out of the corner of my eye and low and behold there were albies to be had! First cast in and I got a bite.... 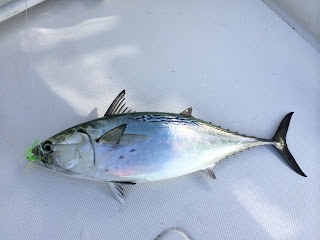 It doesn't always happen like that, but it sure is nice when it does....

A fine Sunday in deed!