Four years running I've made a run to chrome country shortly before Halloween; if the the flows aren't a mess, it's tough to find more blindingly bright fish than you will then.  Plans set, fingers crossed.

Flows remained at 335cfs throughout September and October and finally some cold weather set in with forecasted showers in the 10 days leading up to the trip.  Good I thought, bring on the Chrome!

Four days before our departure the DSR posted about a big run of Steele, guests hooking fishing left and right; this continued for two days.  By the time we would arrive those fish would be settled in right where we wanted them, shit was shaping up nicely.

Tuesday night (departing Thursday): Flow spikes to 750.  Booyah I thought, this will draw even more fish in and by Thursday the fish will have settled into the flow.  Wednesday night (6hrs until departure): Flow spikes to 1200, nothing but rain in the forecast with nighttime temps dipping into the low 20's.  my deepest concerns were creeping up on me.

4 am departure from Farmington, we rolled west through beautiful sunshine until we reach Camden, NY.  With clouds looming in the distance we crept in the back door toward Altmar.  Rain first, followed by a heavy mix, remains of small snow banks from the night before greeted us along the way.  When we pulled into Altmar it was straight up hailing; sheets of pea sized hail fell for the rest of the day.  Good old fashion Steelhead weather! 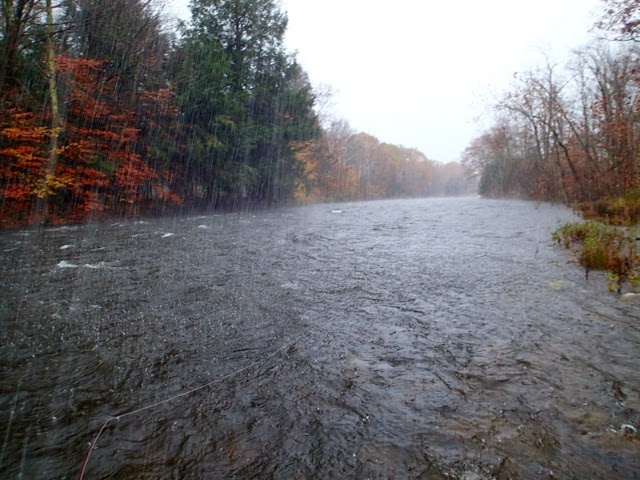 With off color water and heavy flows everywhere, we wandered upstream.  This was my buddy Carter's first trip for Steele; I was potentially more excited than he was just to see the 'Oh Shit!' look on his face when he tied into his first hot fish in this high water.  A new 10' 7wt Sage Method in my hand with a 4280 reel, I was giddy as a school girl to give it a taste of Chrome.

Less than a dozen casts into the trip, the new rod and I had our first taste. 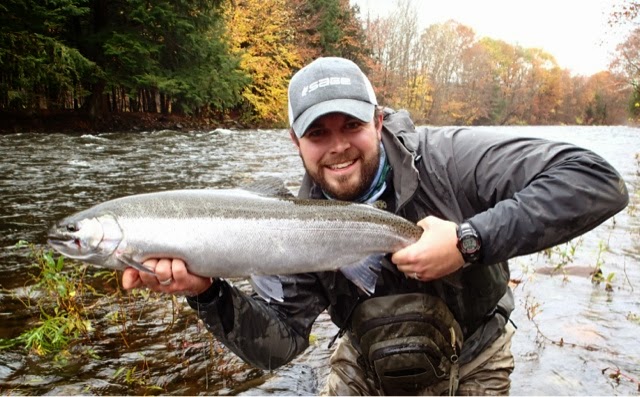 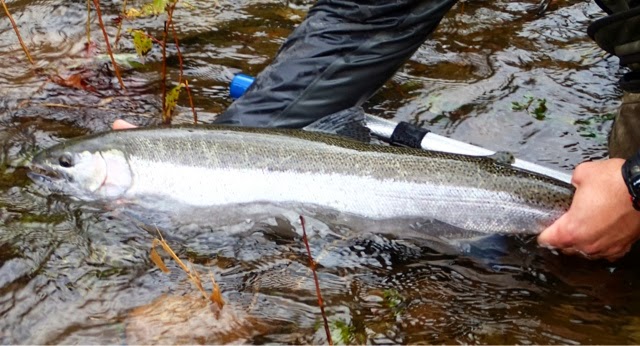 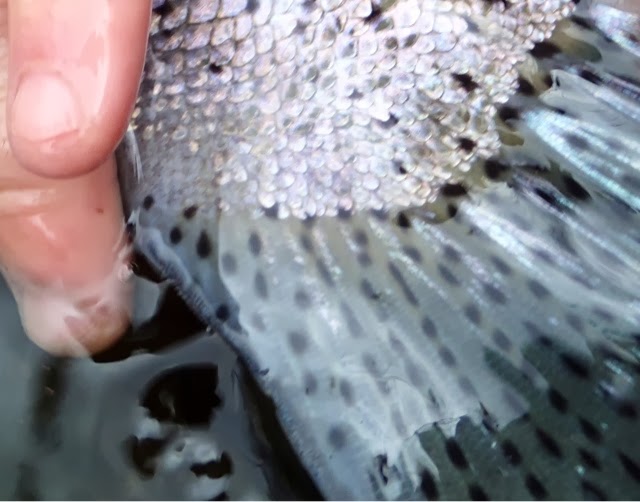 We stung a few more before the end of the day but none were landed.  If we learned anything from our first few hours on the water it was that landing them was possible but it was going to be tough.

The next morning was Friday, we decided to check a few downstream honey holes while it was still a weekday with hopes of hiking in to less traveled waters above Altmar on Saturday when the crowds would return.  We arrived at the Fridge before light to find four dudes happily flogging the waters.  The guys informed us that our other viable option at Snagger's had guys in it as well.  Good lord, Friday is the new Saturday apparently.  Somewhat deflated we wandered up a bit to see just how many guys there were above.  Much to our surprise it was wide open!  We settled in and made quick work of getting the skunk off for everyone. 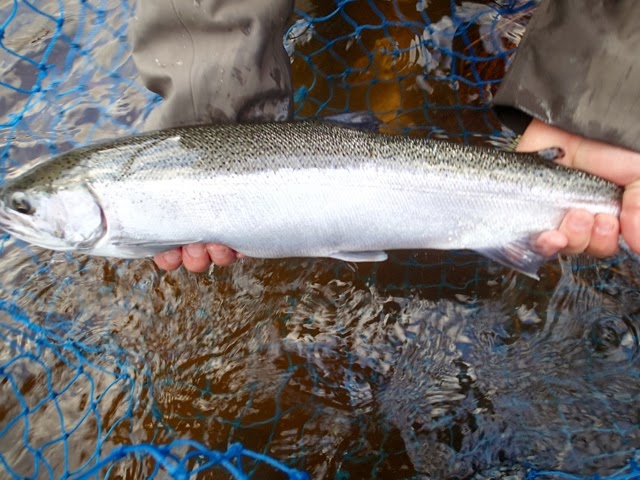 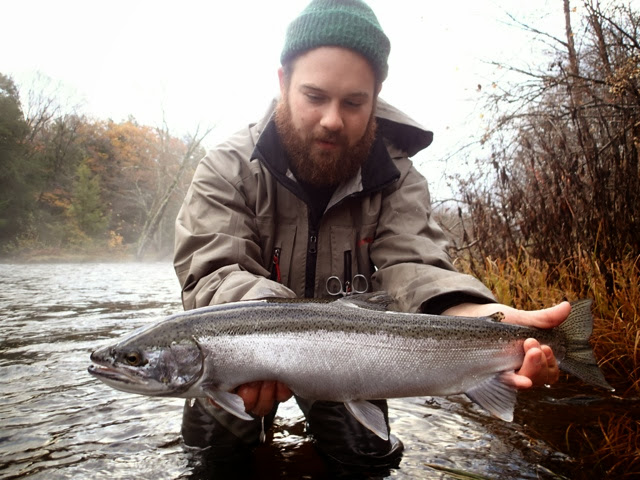 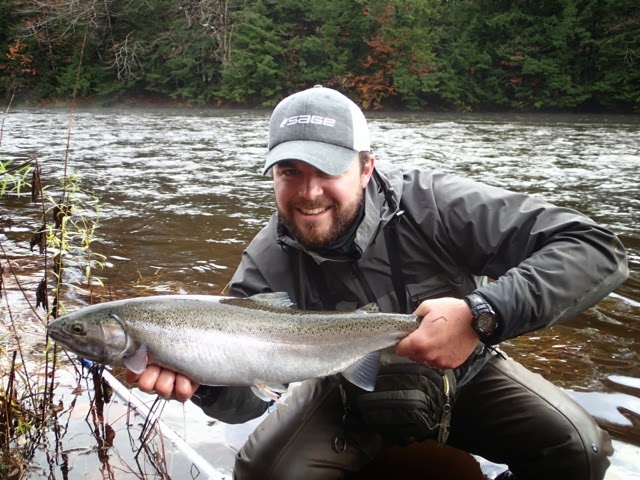 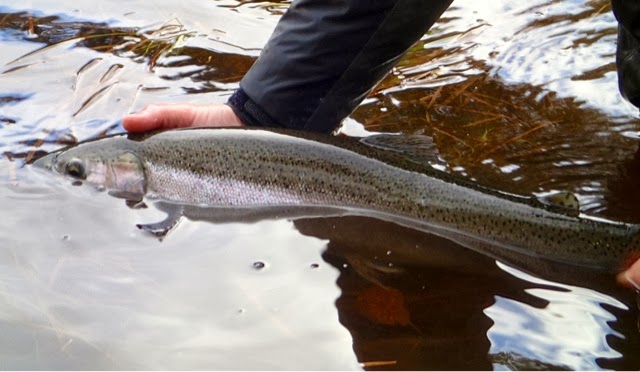 And then it was the Rookie's turn....holy shit face was short lived. 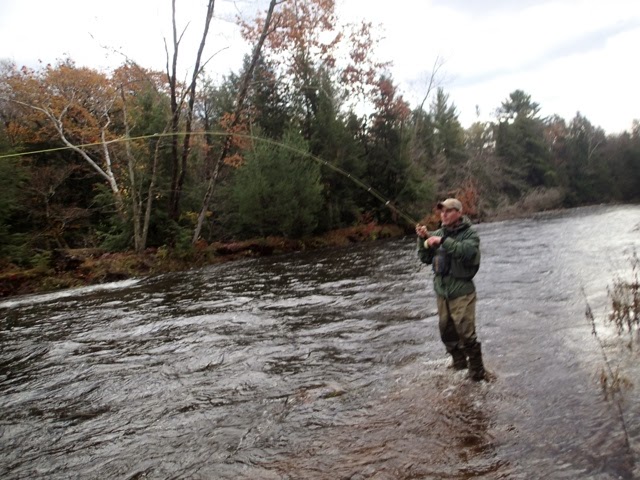 First he ever hooked 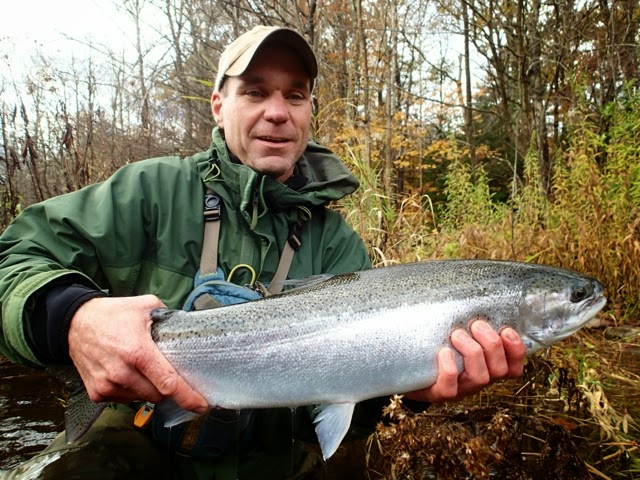 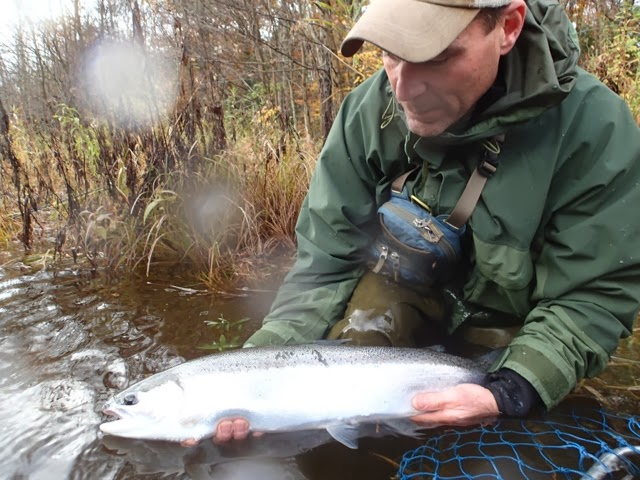 After a slow spell we investigated a few other spots.  Limited Steele in those locales but we did manage to find a bunch of very fresh Kings that were as bright as any Salmon I'd ever seen at the SR. We hooked a few but they were too much for us in this log infested area of the river.

Saturday we returned to the stretch we has fished for a few hours on Thursday afternoon.  We were up early and as we pulled into the lot we saw four dudes walking into the field.  We grabbed the rods, opted for a shortcut and cut those fools off much to their dismay.  As we arrived at the spot it wasn't long before that crew rolled out of the woods at the same area we had locked down....crisis averted!

Didn't take long and the fish began moving upstream in 12-16" of water right along our bank. 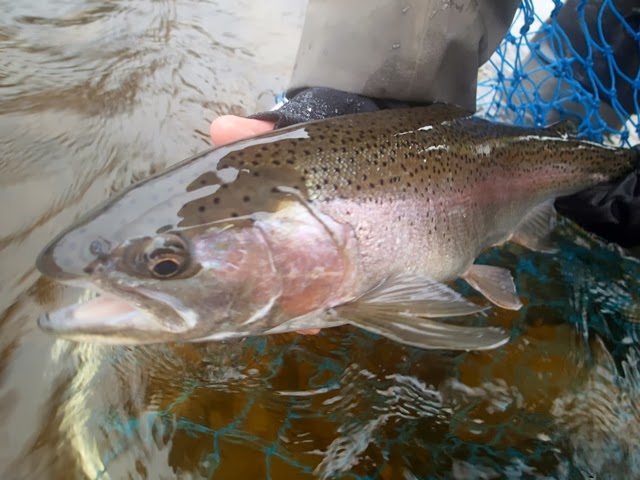 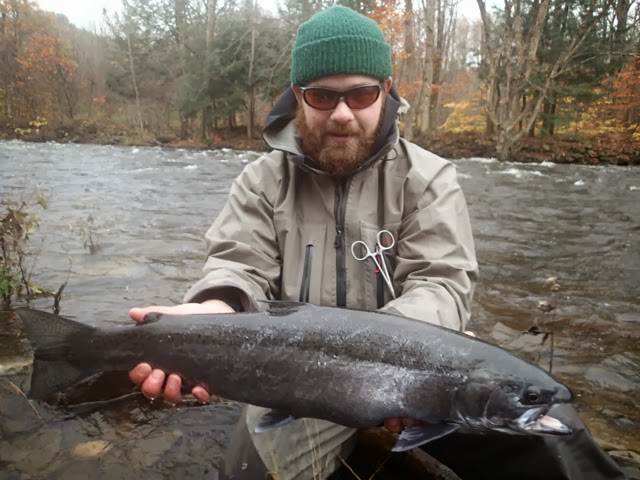 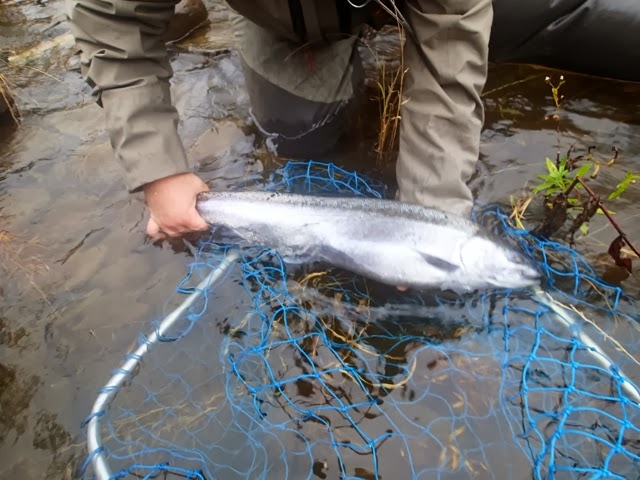 We tied into 14 or 16 that day putting a healthy number in the net.  Given the flow a larger number enjoyed the advantage of the heavy current and headed back downstream.

Sunday we headed back to Snagger's for a few hours before rolling home.  Carter was eager to leave his stamp on the SR and eased in.  It ended on a high note; he'll be back. 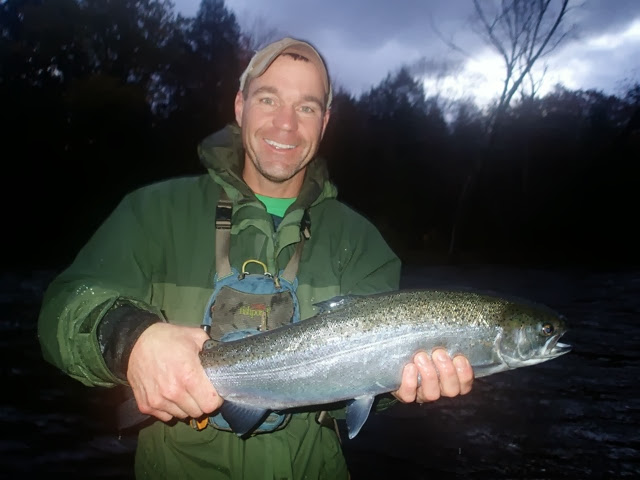 Posted by Andrew Wilkie at 9:44 PM

AWESOME. some of the freshest, prettiest fish i've seen out of there. well done gents! glad to hear the new stick and you are getting along

Sounds cold and wet. But it's a damn shame I missed it this year.