A place not so far from home boasts one of Maine's finest Brown Trout fisheries for the shortest of times in the fall.  If you blink you'll miss it. If you rise too late you'll be beaten to the position.  If you skip a day, you'll miss it.  This fall I decided not to blink.  I was in the water an hour before sunrise each and every morning I fished (except one day with Jasper) and I missed a few days but never two in a row; when it happened I was there. 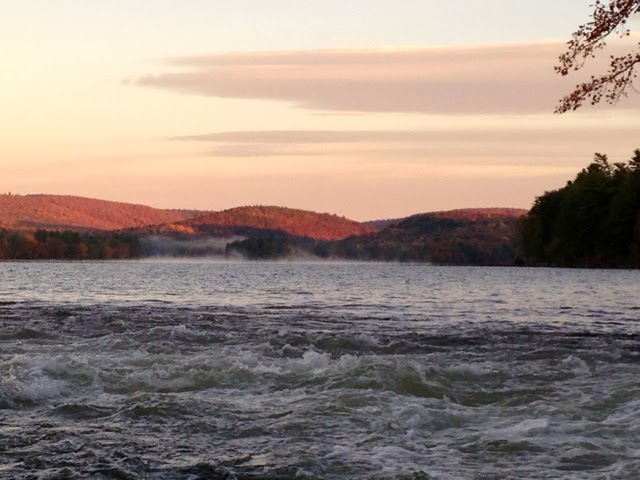 The location is a flowage between two large lakes, split by a dam, a complex of lakes many of you are familiar with.  Its easy on the eyes and often hard on the heart. The combination of current and lack of easy landing pockets make it a brutal stretch to land a fish in the 16" class let alone a specimen in the mid to upper 20's.  These 16 mornings (I'm still going) fell between late September and the 22nd of October; I've seen it all on my quest to strike it right. 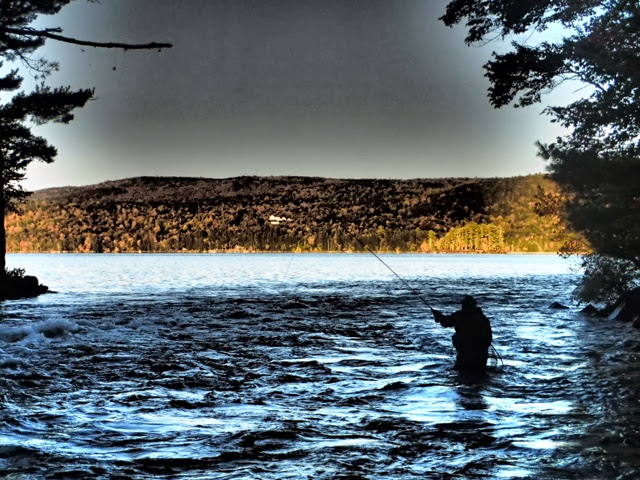 My first morning was a Sunday.  I fished with Marty, co-owner of a ski and stove shop in Farmington.  Todd, his business partner, fished extensively on the ice with Jasper and I last winter and made a trip to Steele country last March.  They both are responsible for funding Jasper's XC bike trip back in the day.  Their experience at this spot exceeds my own and when I was told it was getting time to investigate this stretch I was all in.

One gate on the dam was open, the flow was nice and it rained like hell. 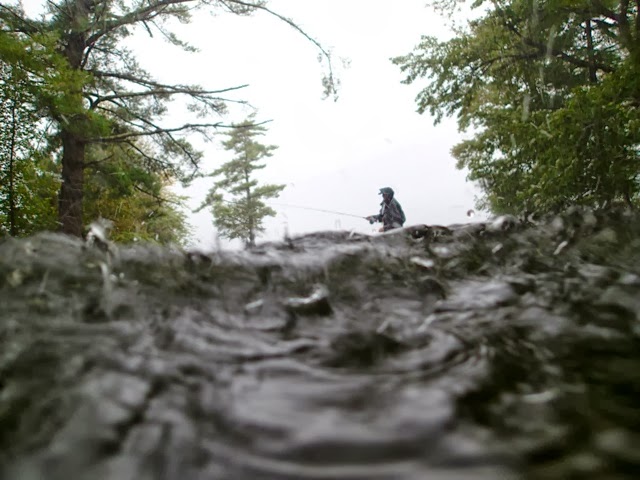 We landed some fine fish upwards of 18". I was told these fish were mere precursors to the spectacle to come.  I was sold, it was time to grind out some hard time on the water. 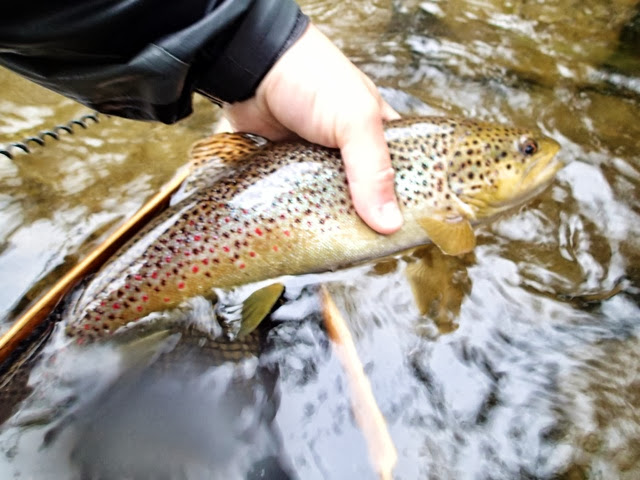 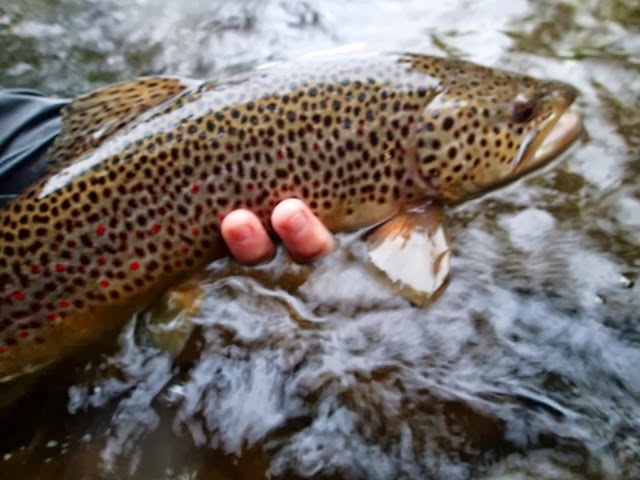 Fired up from my first day of the season on this water, I was met by a troubling situation.  The dam, for the first time in my life, shut down completely.  A team of volunteer dam keepers operate the dam with the only town mandated operation being a drawdown of the upstream lake starting on Columbus Day. A quick call to the head volunteer was met with some haughty answers to my polite questions regarding the closure and the fish which began to run, were left confused and without the flowing water they craved.

For a number of mornings I caught fish but nothing of the caliber landed on day one.  Now and again I would land a fish close to 18" as they let more and more water out after nearly a week long shutdown. It was maddening mulling over what was setting up to an epic run only to be squandered by bizarre dam releases. 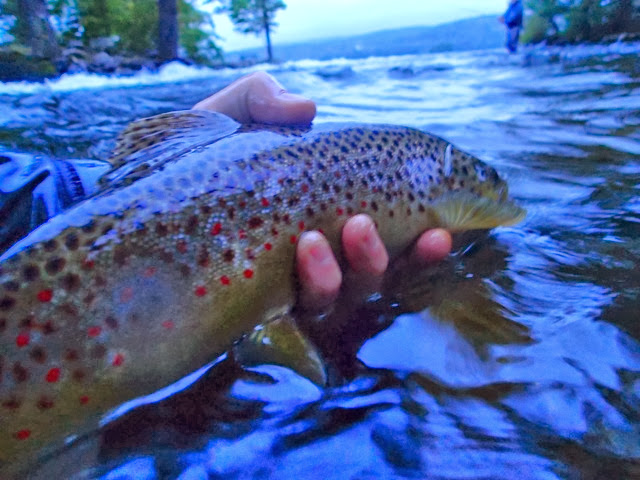 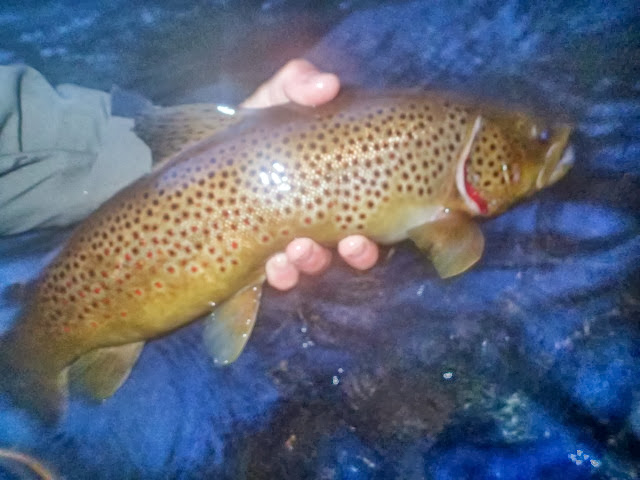 Sooner or later it had to happen.  In the back of my mind I questioned if the vigilante dam operators would actually abide by the town mandated lake draw down.  Low and behold, Monday of Columbus Day weekend they opened the east gate as wide as it would go.

Fishing was slow that week as the fish adjusted and filled back in after a prolonged period of low flow.  Jasper and I planned to fish on the Saturday after Columbus Day and were hopeful that things might finally turn on.

The stars aligned, the midge bite was on and we slayed. 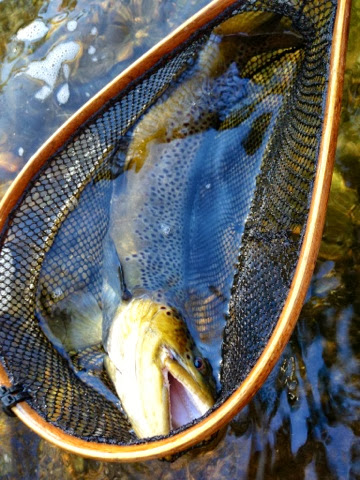 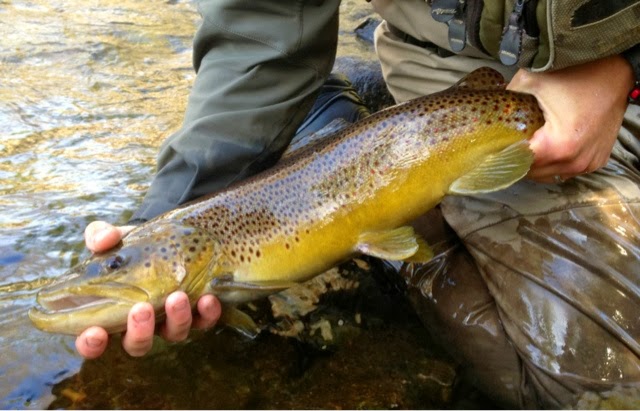 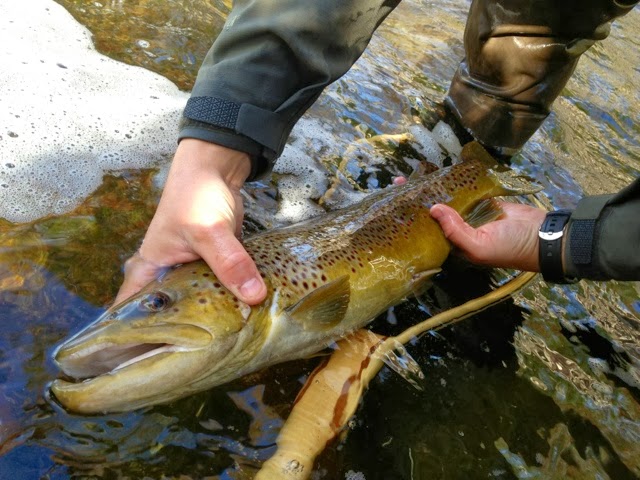 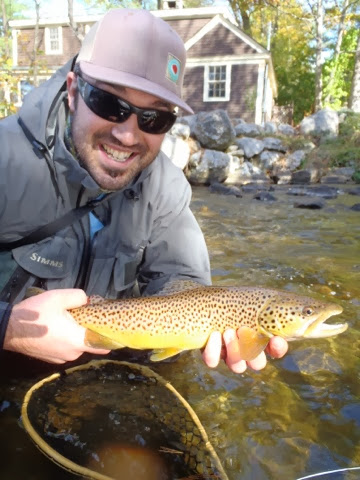 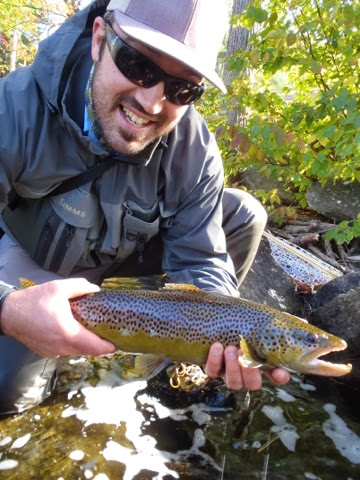 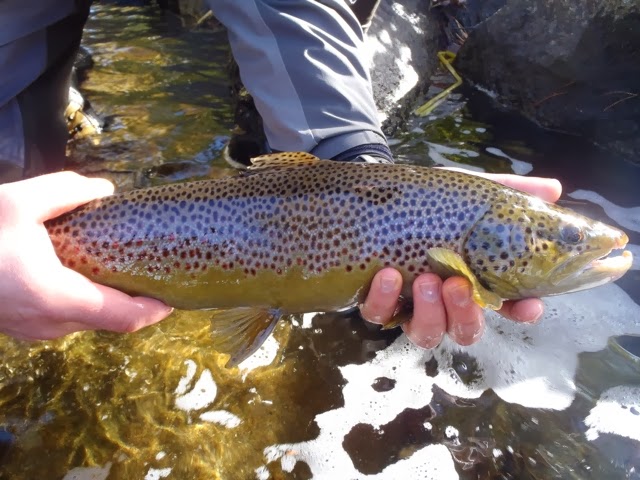 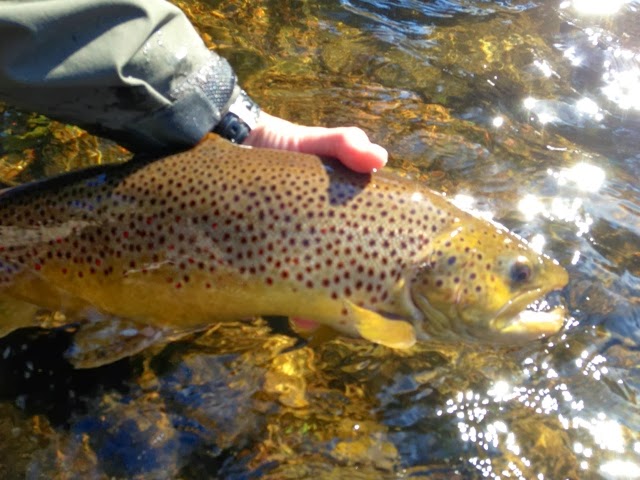 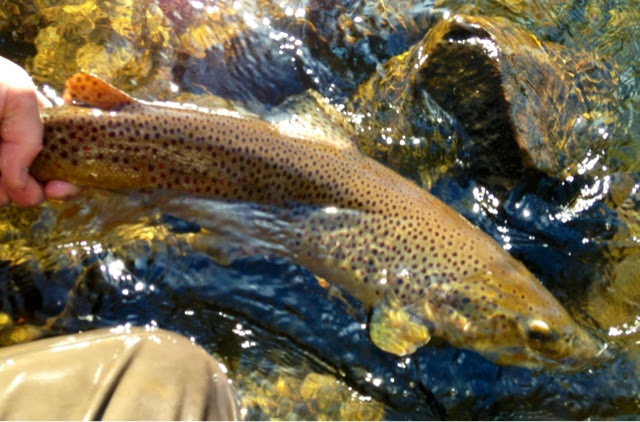 Next up, Sunday with the BFC futures: Nick Ford '15, Tyler Schleich '15 and Andy Cannon '15.  We met at around 5 am and solidified our position.  The Sage 4650 reel is silhouetted by the full moon. 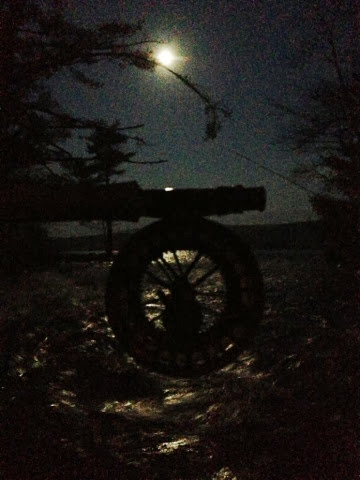 The bite didn't disappoint.....below Tyler is deep into his backing on a hen that took him clear to the lake. 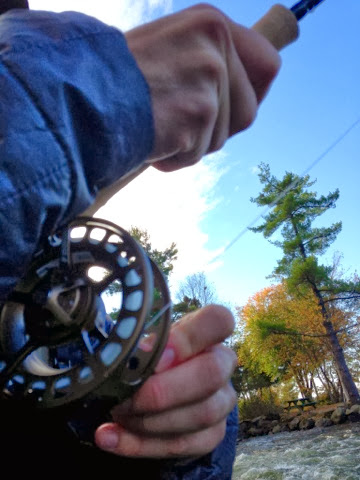 A hero move to dislodge the fly line from a mooring buoy some 30 yards offshore proved successful and Tyler landed his largest Brown to date. 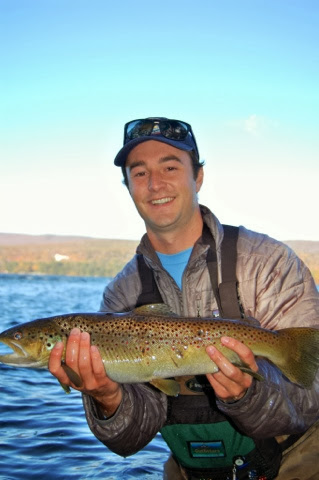 Again and again the boys went tight, Andy managed to land a fish but despite numerous hookups, Nick didn't bring a fish to net. 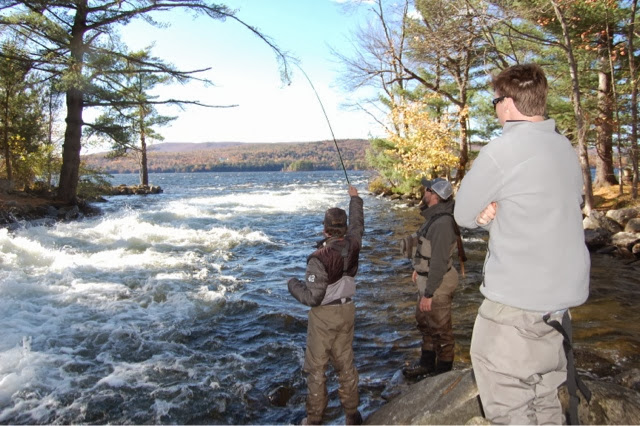 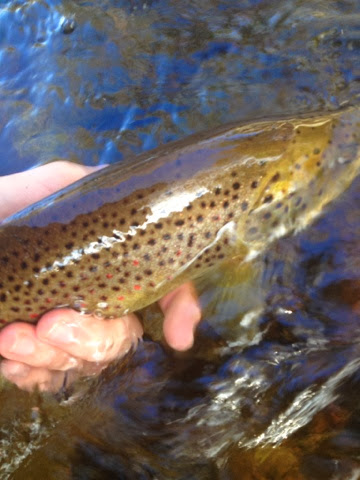 There should always be a Plan B, a short drive ensued and a small stream five miles away was the target.  Overhanging branches and downed trees in the water make this sight fishing location extremely difficult to fish but the payoff can be sweet. 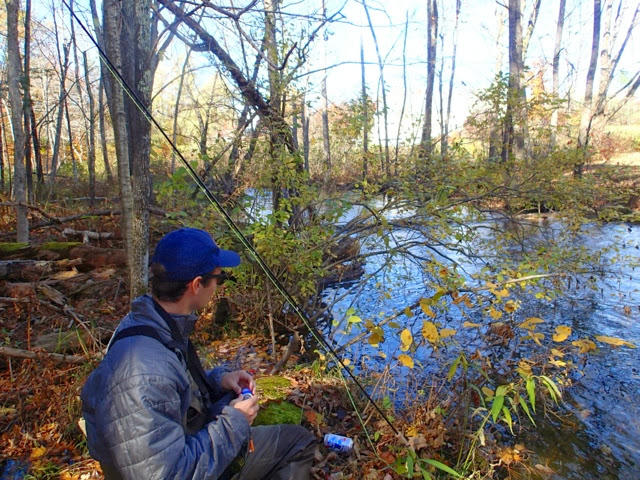 After threading my rod under several downed trees and various snags mid river, Tyler hooked me up with a badass NJ just upstream of the point of no return 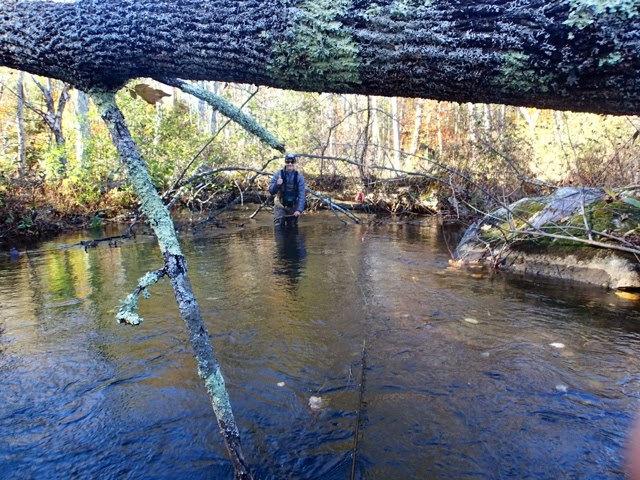 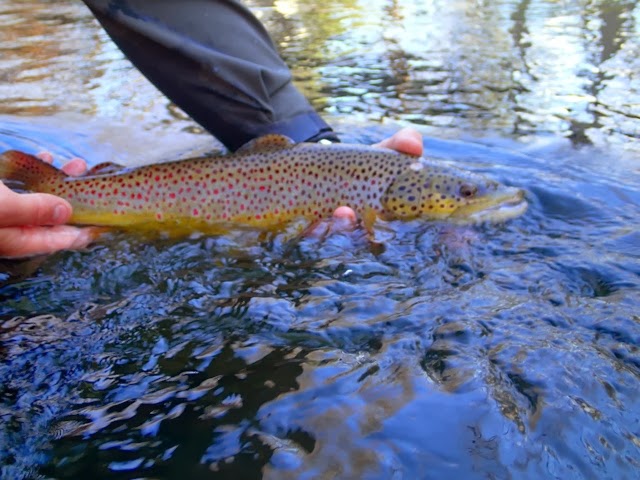 Nick broke the skunk on Plan B water as well....spirits were high; some spectacular Central Maine specimens under our belts. 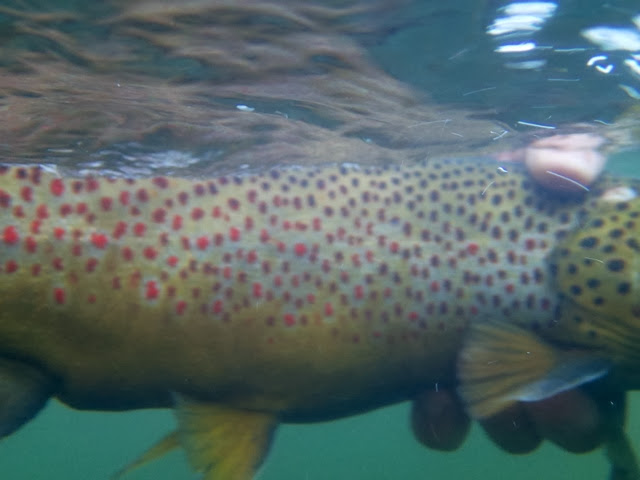 Jesse's dad and I had been exchanging phone calls and juggling schedules to get on the water one day before work.  After a few missed opportunities we finally settled on a morning.  Fresh blood in the water and a new unadulterated fishing perspective always brings good things.  After a number of healthy Browns coming to net, old Jon Robbins tied into a hog.  A lengthy battle ensued as this Salmon caught the current numerous times, only to swim slack lined right back at us on the river right eddy.  The fish snagged bottom several times during its desperate attempts to fray Jon's tippet but in the end, this well oiled team enjoyed a few photos of this 25" kipe jawed behometh! 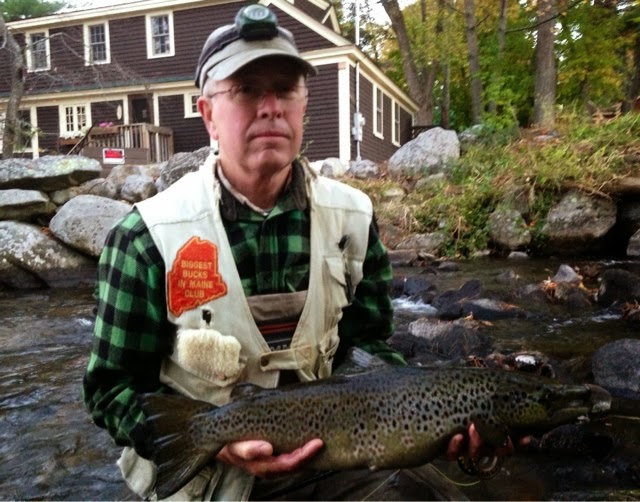 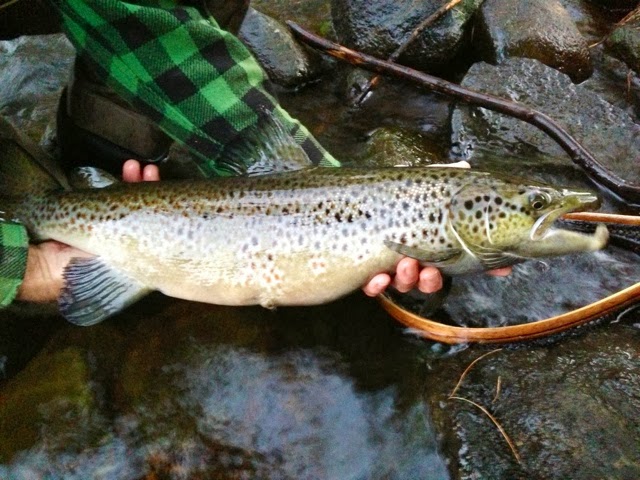 And with that, I slunk off to work at the conclusion of my 16th morning with a smile on my face.  Poseidon giveth.

Posted by Andrew Wilkie at 7:13 PM

You have dialed it in on that bite sir. Well done. I plan to add to that photo display with our results soon.

Holy smokes. Thataboy wilks and crew. Let me quess, you dead-drifted a size 2 B.B.D. underneath that size 20 midge...

And people tell me I'm being ridiculous for insisting on at least 100 yards of backing on my trout reels.

Gorgeous fish, that they are! Stud of a salmon for Robbins Sr., too. Good work John and Wik!

damn. finally got a chance to read this in its entirety. a fine "season," indeed. great photos, great fish, great fishing my friend. looking forward to seeing you in a few weeks!