I came across the following while going through some old documents.  It was written a couple months after I had returned from New Zealand, sometime in the spring of 2010.  I figured it might be a nice change of pace and some content for the blog.  I hope you enjoy. 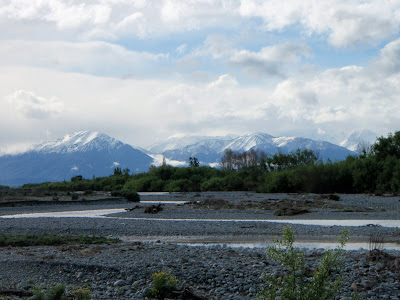 i knew for a while that there would be a last cast.  i suppose this is a pretty obvious statement, but i had the conscious thought of this cast months before i actually made it.  the nature of my adventure made me contemplate beginnings and endings, among many other things, so i thought about this last cast now and then.  i wondered what would happen when i made it.

prior to my arrival i thought about my first cast too.  i wondered if i would catch a fish on it.  that would certainly be story worthy.  but that seemed to be the only daydream i could make about my first cast - catching a fish on it.  i didn't daydream about the excitement i'd have, or how nervous i'd be.  i didn't think about what the weather would be like, or how it would feel to stand in my first kiwi trout stream and false cast for the first time.  i envisioned it ending with a fish in my hands.  so when i arrived to the river to make my first cast, things were looking real good and just as planned, as not one but two trout were rising in the first pool ahead.

to be honest, i made a few practice casts before i made my first one at those rising fish.  i hadn't strung my rod up in maybe a week so it was natural to take a few warmup casts while those two fish continued to surface feed.  i tried to impress my guide with my practice casts and while i may not have done exactly that, i'm sure he saw that i had indeed actually cast some line in my days and had probably stung a few fish.  i reckon he let out a deep breath when he saw i could cast at least thirty feet of line relatively straight.

after a few practice casts, we moved up into position behind the feeding fish.  there were two, one about 10 upstream from the other.  the go-to-rising-fish-fly was put on, a parachute adams, and i followed my guide's instructions moving slowly into the stream, holding the fly in my left hand, alternating my sights between the rising fish and the bottom, doing my best not to make any sudden movements or disturb the water too much.  i stopped when told to and began to pull some line off my reel.  again, i stopped when told.  and began false casting and then laid down a cast about a dozen feet to the right of the feeding fish.  shit.  i stripped line in as the fly floated past the fish and began to cast again.  the next cast was better, but not good enough, still a half dozen feet off target. under instruction, i halted and waited to see if the fish would rise again, as i may have spooked him already.  i listened to my guide detailing where the fish was.  it had moved up a little bit, so i followed.  another cast was sent upstream with the same result.  i would quickly learn that three bad casts in a row to a rising fish is not good.

i cast over my guide Chappie's arm so we could change flies and try again.  several casts later the fish was spooked.  luckily the fish hunkered down instead of bolting upstream and disturbing the other fish, still feeding a little ways ahead.  i moved into position to try this second fish and began false casting.  some number of inaccurate casts later i finally got a good drift and the fish came up and pushed the fly aside with its nose.  i took this as a strike and pulled the line off the water, ensuring the fish was spooked.  i watched as the fish swam quickly upstream, then did a 180 and swam downstream adjacent to me, only a few feet away.  the fish circled and paused, seemingly taking a good look at this foreign being in its feeding lane.  i was given the middle finger, Chappie said, and the trout was soon gone, the pool devoid of any other feeding fish.  not exactly the result i had envisioned.  we shrugged, laughed it off and continued upstream.  welcome to new zealand.

i made my last cast in new zealand four months later, on a different river, with the same company, this time as two anglers instead of a guide and a fresh-off-the-plane yankee angler.  when the day began i had a pretty good feeling that it would be my last day fishing and i'd therefore be making my last cast.  it was another sunny day but the arena was considerably different, this time primarily blind casting for rainbows instead of sight fishing to browns.  this difference may be the reason i felt more satisfaction in my last cast, as compared to my first.

it's hard to say what my exact expectations were for my last cast.  in regards to catching, i don't know if it's a good idea to have any expectations in general, because i think it's a lot more likely that expectations of that kind are much more often left unfulfilled than met or exceeded.  if your expectation is to enjoy your time on the water, great. i think that's a fine goal and probably should be every angler's main objective.  that's why we're out there, isn't it?  it would be silly to say i didn't wish to catch a fish on my last cast.  isn't that the hope of every cast?  it would also be silly to say that i wouldn't have cared if my last cast ended up in a tree or in a tailing loop.  if i did know anything before i made that last cast, it was that i certainly wasn't going to let it be an errant or ugly one.  sometimes all you can do when fishing is just that - fish.  hopefully, fish well.  so as my last cast neared i did know that i wanted it to be a good one in the sense that i had cast well and fished the cast well.  a realistic goal i think.

we had hiked downstream from the car park, beginning our day a good, couple kilometers away from our final destination.  as we neared the van, the time for my last cast came closer and closer.  i fished well that day.  because we were blind fishing, i tried to read the water as best i could and present my fly the same.  i had a few takes that day, hooking and losing one fish after a lengthy, downstream battle.  i was casting well, my fly generally landing where i wanted it to, floating drag-free most of the time.  when i had fished a pool well to no avail, i would shrug at Chappie and traveling companion Lucas and we would move on.  laughs and stories separated each pool.  it was a great day.

we finally reached the pool that was going to be the last of the day.  the last cast was closer than ever.  at this point in my angling career, i acknowledge that i have a problem making last casts.  the number of times over the past couple months i said to Lucas, "let's find just one more fish" so i could make another cast was undoubtedly in the double digits.  surprisingly though, making my very last cast in new zealand wasn't as difficult.  perhaps it was the anticipation i had made the cast out to be, but more likely it was that i had come to realize just how incredible the journey had been.  i had made thousands of casts, fished a great number of incredibly beautiful rivers and had had some very memorable encounters with a large number of fish.  i accepted the trip for how amazing it had already been.  there was just one task left:  make my last cast.

so i made it.  and i made sure it was a good one.  i reeled in for the last time and stepped out of my last kiwi trout stream.

Ahh, reminiscing about that trip has got to feel good Robbins. There will be many more last casts in your life my friend and I'd wager more than a few will end in glory.