This blog is pure awesomeness. Quick intro - my name is Andy Cannon, I'm a junior at Bates. I love it up there. My fly-fishing partners in crime are Tyler Schleich (aka Schleich daddy) and Nick Ford (aka Ford) and of course the legend himself, Andrew Wilkie. I met Keith briefly too and its always a pleasure to connect with you alumni.

For a week, my family and I drove up to the Gaspe Peninsula, Quebec targeting Atlantic Salmon during the summer run of fish into the Grand Cascapedia, Petit Cascapedia, and Bonnaventure Rivers to spawn. We stayed at a Salmon lodge called Camp Brule located right on the Petit Cascapedia, allowing us a quick and easy departure on mornings we wanted to fish the petit. We would take a canoe with a guide push poling us down the petit. Water was so clear that when you passed over a fish that was in the 20-30 lb class range, the thing would look like an absolute submarine. On the Grand and bonny, we waded most of the time.


For most 21 year olds, the 4th of July weekend calls for partying with your buddies from school, using your ID fearlessly and chasing girls down the beach... All in all, a great couple days to be in the states.

For me... I had my cooler of beer and a 50 year old French guide coaching me where to cast my fly. There wasn't enough beer to make this French guy compete with any girls on a Nantucket beach, but he had some funny stories so I was still having a great time. While we were up there, the weather was hot as hell. Upper 90s throughout the day which warmed the glacier fed water to about 65 degrees which is dangerous to the salmon. Despite the horrid conditions for salmon fishing (low hot water), we still managed to get into some fish. Below is a pic of a sea run brookie I caught and ate for breakfast one morning. We caught the brook trout as accidental catches on salmon flies. 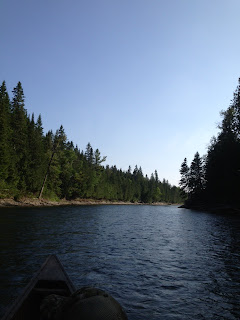 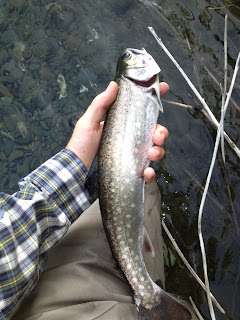 Over the course of 4 days, I hooked three salmon and landed two. The fishing can be mentally and physically fatiguing especially when you are out there all day heaving a 9 wt rod with little or no results. But when you do hook up, its the best feeling in the world. You can see I am pretty stoked.

Healthy 17 lb Atlantic Salmon. Another fish that I caught had sea lice on her... these fish were fresh from the ocean and jumped like crazy when hooked. 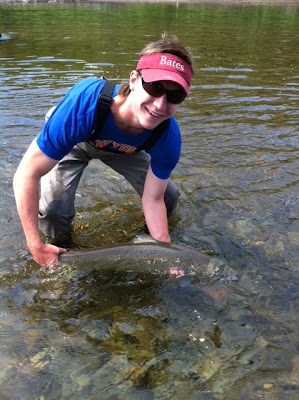 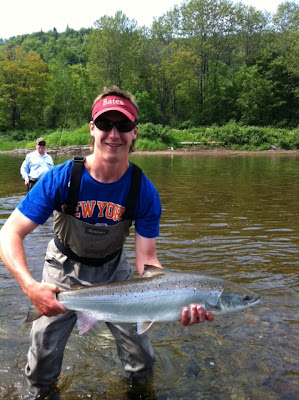 The fish were taking blue flies on the Grand for the first time on the Camp's record. And it was not just any blue fly, the salmon were honed in on a small Blue Picasse. I rolled a fish on the Blue Picasse 3 separate casts in a row. Then changed my fly (as to not bore the fish out of taking) to a white muddler. No love. Changed to a Blue laxative. No love, shat my pants. Then back to that same Blue Picasse ...and sure enough Bang! Fish on baby!

I also fished large Bombers (dries) on the Petit Cascapedia, this river is much more clear/chalky than the tea-colored Grand. Personally, I believe a salmon coming up and crushing the dry fly is the craziest experience one can have on a fly rod. It is an absolute must do if you are a fly-fishing fanatic. I had a few come up and smash this trip but I failed to hook any. 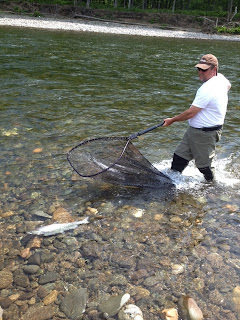 My family and I have been coming up to Camp Brule for more than a decade now. The annual run of Atlantic Salmon in these rivers is one of nature's most amazing migrations. It is truly mind-boggling that these fish travel out to Greenland to feed every winter and come back to the same rivers where they were once Par. Unlike the Pacific Salmon, these fish don't die after spawning. I know I don't have to tell anyone in here this, but it just adds to the respect for the bigger fish that have overcome so many obstacles to reach mature adulthood.

This pic is of a 13 year old kid with a big salmon hauling down river. First time fly-fishing ever. Stud! 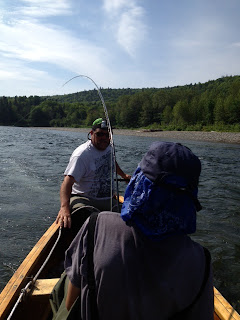 If one of these trips ever interests you, I highly recommend Camp Brule. Great guides, great atmosphere, and are second to none with putting you on a salmon. They also do Moose and Black bear hunts if that interests you. The "Gaspe Macnab" is a week in September where you try and bag a salmon, moose, and a deer in one day. People have apparently come close to doing it, but it has never happened. I'm not a hunter, but this sounds pretty bad ass.


On the way back, we passed through my grandmother's place in Maine and absolutely slayed Stripers through the night on mackerel. Fished from 11pm to 2:30am and landed 10 fish. Smallest was 24 inches amd the biggest (one next to my foot) was 36 inches. 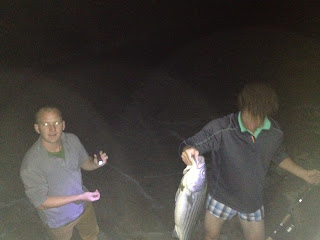 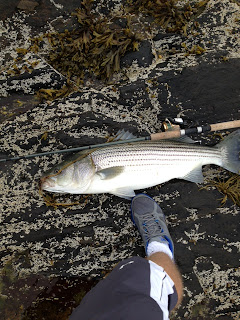 Thanks again for the blog invite Jesse and hope to meet other BFC members in the future. If anyone will be coming up to Bates at all in the next two years, let me Tyler or Nick know. We are always game to meet up fish somewhere and have a good time.

you can reach me at acannon@bates.edu or on Facebook.

Andy
Posted by Andy Cannon at 1:02 AM

Email ThisBlogThis!Share to TwitterShare to FacebookShare to Pinterest
Labels: Atlantic Salmon, BFC Future, Cast a fly and hold on, Mahoney Thumbs Up of Approval, On The Swing, taking names

awesome report! thanks for posting, andy. great looking fish. the ones that don't come easy are the ones that mean the most! hope to get on the water with you some day.

Nice report Andy. I'm also quite envious of that haircut. I bet a lot of ladies have limped out of your dorm room after falling for those perfect locks...

Andy, solid work. I'll have to find the time to chase down some Atlantics some day. Thanks for the read!

Those are some sexy fish. Good work my man!