Grabbin' Tail On the Miramichi

Last summer Walsh and I ventured north and east to New Brunswick to chase the bright Salmon as they ventured upriver from the ocean.  We were full of intel from our legendendary contact Wayne.  If you recall our post from last July, we had everything we needed from perfected fly patterns, free lodging and detailed information on fishy runs....yet we got burned hard.  The weather was in the upper 80's, sun high in the sky, low water conditions and unwilling fresh fish filled the water.

Fast forward eight months and Jasper and I found ourselves pointed in the same direction to meet up with Wayne and our mutual longtime friend Dave Comeau.

I departed Thursday at 2:45 am from Farmington, met Walsh in Newburgh and we were on the road in earnest by 4:30a.m.  It was rainy and 48F for most of the ride; the elders were one day ahead of us and word was they had gotten into a few, excitement was building. 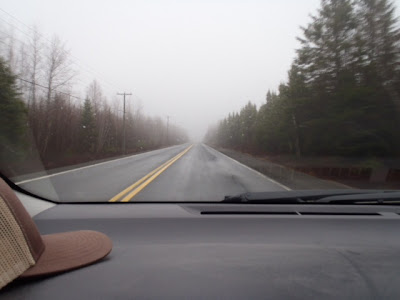 We arrived at the bridge and honked at the guys as we spotted them upstream.  Ten minutes later we had exchanged greetings, split up and were into fish almost immediately. 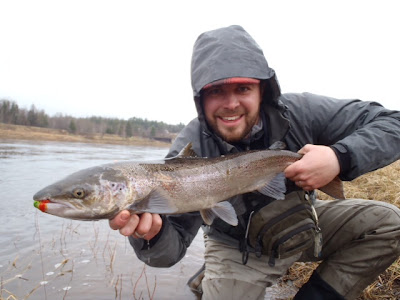 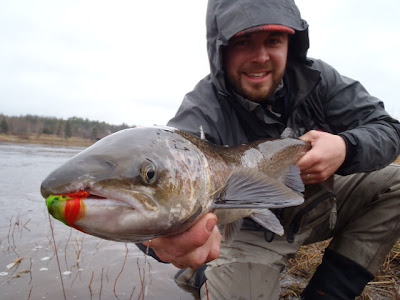 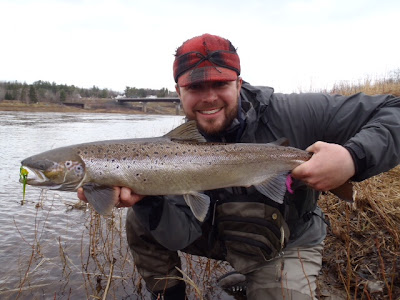 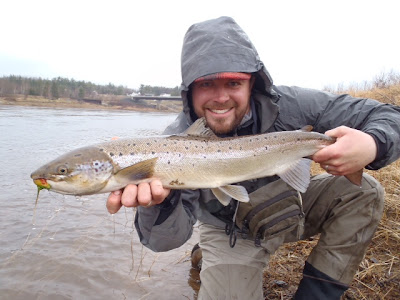 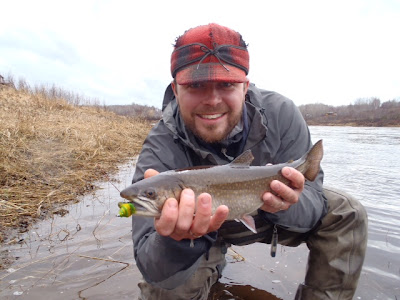 A move downstream was in order to an old glory hole that Wayne had up his sleeve.  This is what a good run looks like on a 150yd wide river in New Brunswick 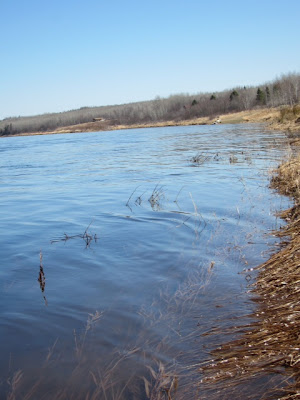 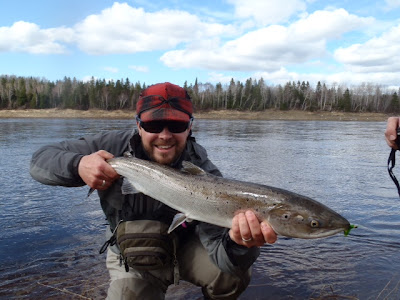 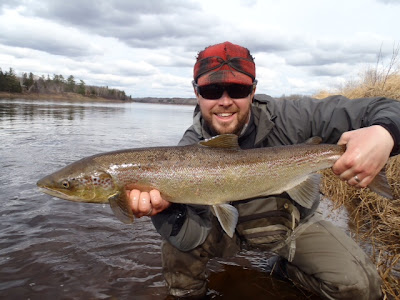 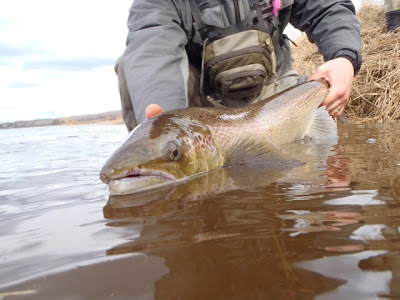 ﻿Dave may have done some damage as well 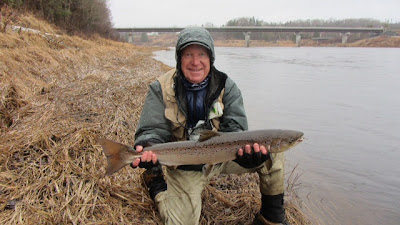 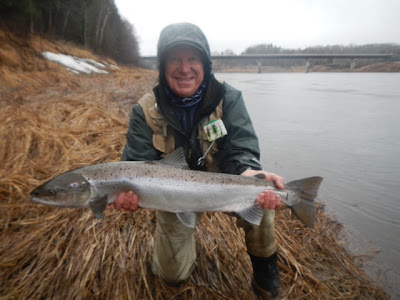 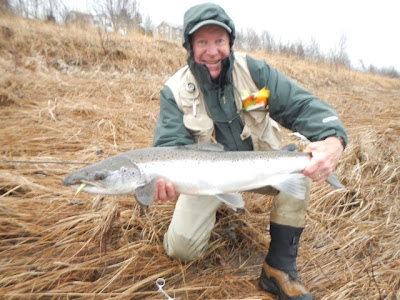 ﻿And Wayne lived up to his legendary status in his unassuming fashion... 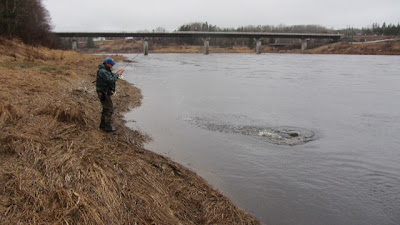 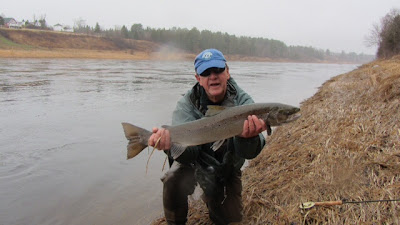 Day 2 kicked off with divided sessions above and below the bridge and we finished off the day in the lower river where we had done well the afternoon before.  I had a tough one with numerous fish battled but none to hand.  Old Walshy got down and dirty and put his first ever Atlantic Salmon on the bank. 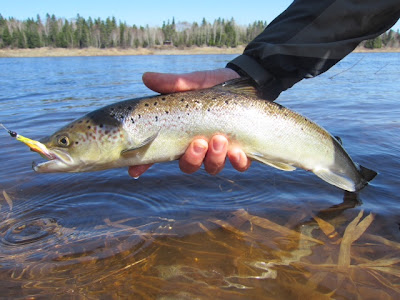 Day 3 was a slow pick but we did manage to handle a few and once again we stung a multitude of fish but their spinning acrobatics in the water/air made it difficult to keep these fish on. 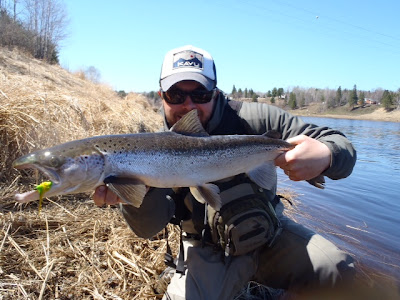 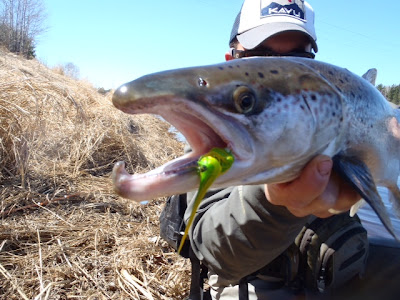 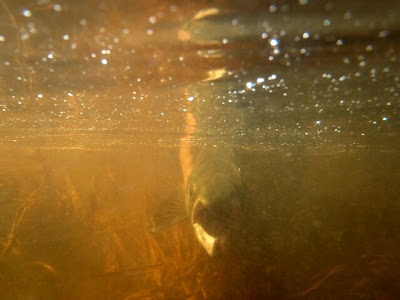 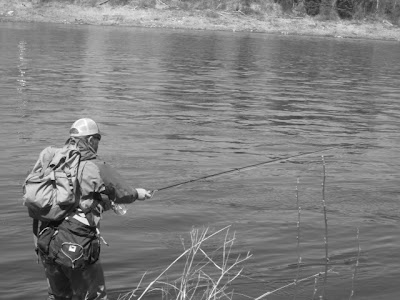 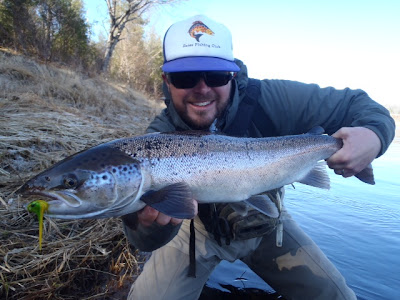 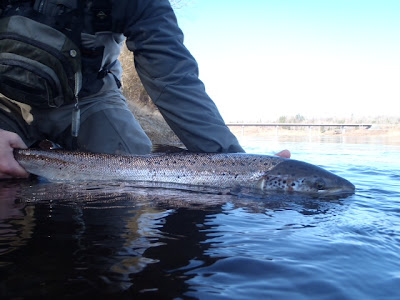 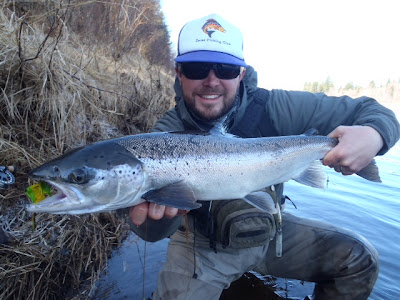 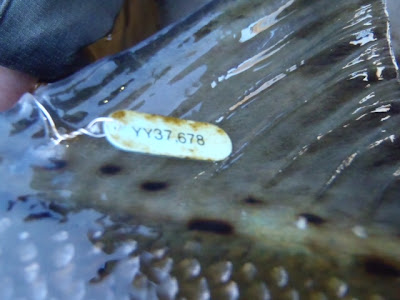 Tag # has been submitted and we are eagerly waiting to hear the information on this fish
All told we landed roughly 28 fish between the four of us.  Many of the pictures from Wayne and Dave I have yet to download.  I enjoyed a hot stick throughout the trip so I would like to apologize for the glutonous amount of pictures of me holding these amazing specimens.  Its not often that I experience such good fortune when it comes to a fish that I have not tangled with before but I am grateful for the opportunity to lay waste from time to time.  My kind friend Jasper tailed many fish for me and I plan on returning the favor when the roles are reversed.

While staying in the town of Miramichi, NB we dined at pubs, pizza joints, and family style restaurants.  The locals are very interesting no doubt, constantly using lingo like "you's guys", "lads" and "yanks".  It is a ﻿different world and worth experiencing.

Wayne tells us that the fishing we experienced is what he would classify as 'quite poor' so we both left wondering what the hell a great trip would be like.

Put it on your bucket list guys; this was an experience of a lifetime.
Posted by Andrew Wilkie at 10:32 PM

Greetings from Cartagena CO. Those fish are quite handsome. Slam pigs indeed. Next spring i'll be up there to tail a few for you guys!

Great piece Wik and even better to be fishing on that river with you and the old men. Well done

Well well well. Look at that!

Great pics Wilks and Jasper. You don't have to ask me twice...

"Its not often that I experience such good fortune when it comes to a fish that I have not tangled with before but I am grateful for the opportunity to lay waste from time to time."

i'm not sure the first part of that sentence is true, but you certainly have a tendency to "lay waste" when on the river, my friend.

congrats to you both. wish i could've joined you.

Wilkie you're a Legend. Now this "hot stick" you speak of, I take it that's different than what you picked up from that stripper from Millinocket, right?

That was mind-blowing. Well done finding fish in what looks like an impossible to read river

I'd like to reserve my spot for next year.