﻿When you've made plans for a big trip a long time in advance, and then you're fishing every weekend before the big trip, sometimes it doesn't fully set in that you're going until you actually leave. 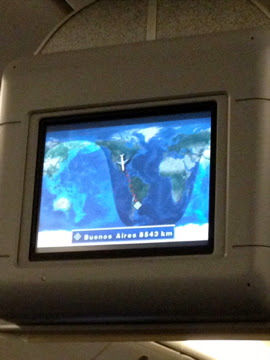 An airport change in Buenos Aires and a two hour domestic flight would put us in Bariloche in early afternoon after departing Seattle the midday prior.  A sigh of relief as all our luggage and gear came around the baggage claim carousel.  Jetlagged, odiferous and giddy, we finally found the familiar face we looked for, as Nick and the Turbo Diesel Hilux awaited (I like to think that this rig was a long, lost cousin to an older Turbo Diesel model that I once owned).  All of the very nice, professional photos below were taken by Nick - those slightly out of focus or lacking that certain je ne sais quois were taken by yours truly.  With heads on a swivel, we made our way from the airport through Junin de los Andes and onto the long dirt road that lead to the amazing Estancia Chimehuin, on the banks of the mighty Chimehuin River.﻿
﻿ 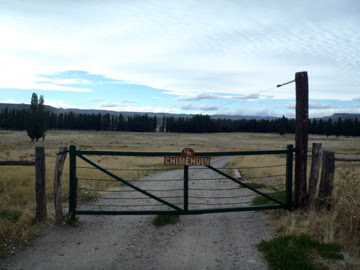 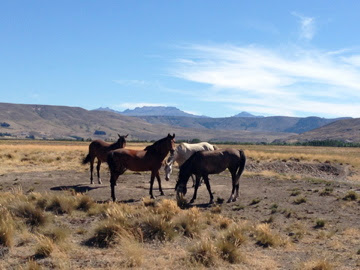 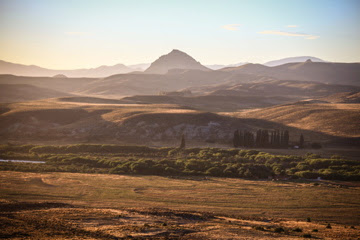 In the view above you can just make out the house in the lower right corner, on the banks of the river.  Below, sun-down on the Chimehuin from the front yard.﻿ 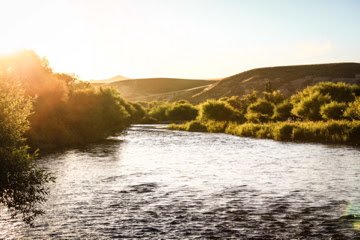 So, we went fishing.﻿ 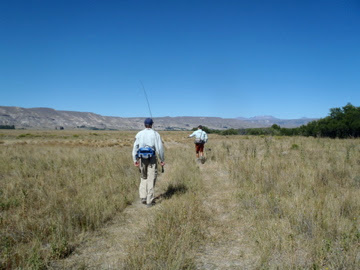 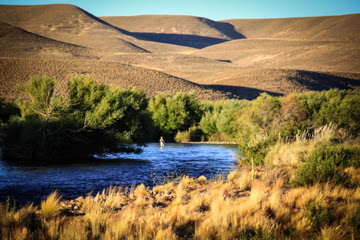 There are roughly two miles of water within the fences of Estancia Chimehuin (EC), but with countless braids and side-channels, these turn into more like eight.  We fished the EC stretch of the river for four days, covering nearly all the water.  In addition, we camped out on two separate nights, fishing two different rivers on one trip and fishing the very upper reaches of the Chimehuin on the second overnight. 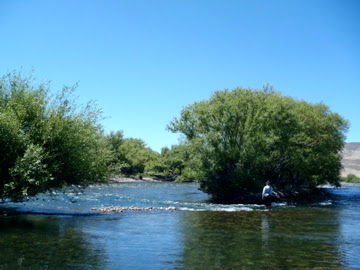 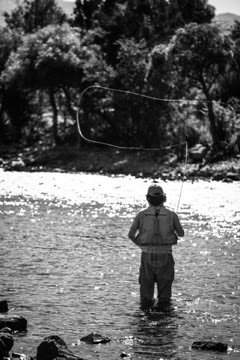 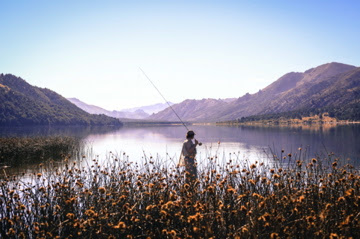 In our first overnight mission, we camped along the banks of Lago Filo Hua Hum.  The scenery was anything but "ho hum," as you can see above.  Rainbow trout cleared the water in chase of dragonflies among the reeds.  After we had exhausted the boca (mouth/inlet), we headed up river, where we would meet our noble adversaries for the day, mighty trucha marron (brown trout).  It was a sight-fishing game on the Filo Hua Hum. It pains me to say, but my trout eyes are out of shape. Thankfully, Nick's were in prime shape.﻿ 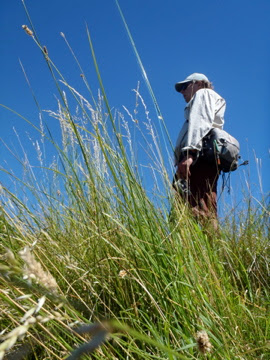 Not only were these brown fish beasts tough to see, but they were even harder to handle when they felt the sting of a hook.  After hooking a respectful specimen on my first cast of the day to then watch the fish do a 180 around a boulder and disappear forever, spirits were high to start.  Later in the day we would call that our best chance, as we left the river skunked, having lost five in total and spooking a number of others, some of which neared massive lengths.  It's good to have a day like that every now and then. 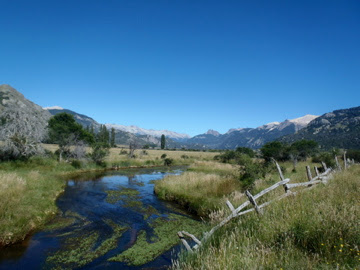 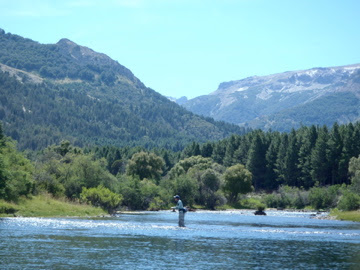 But I'd rather it wasn't every day.  Back on the Chimehuin, the fishing was consistent.  Consistently good, that is. 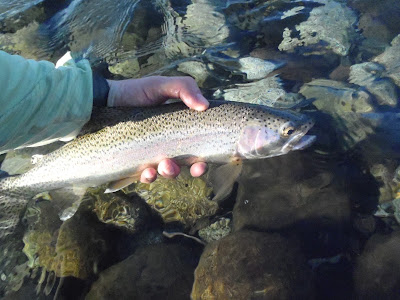 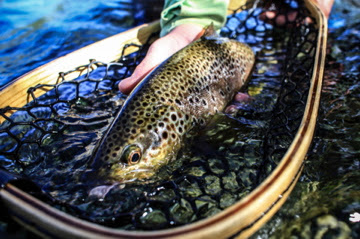 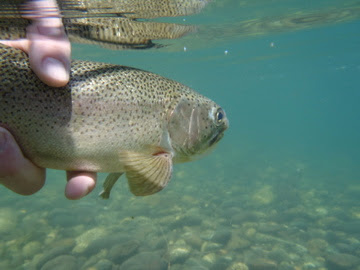 While discussing the fishing with another EC visitor, we were asked to provide a term for the time of day when the fishing gets very good.  We gringos couldn't agree on one so "The Golden Hour," Nick replied.  After spending a week fishing in Patagonia, it seems The Golden Hour would qualify for most hours of the day. 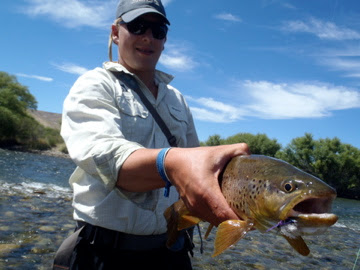 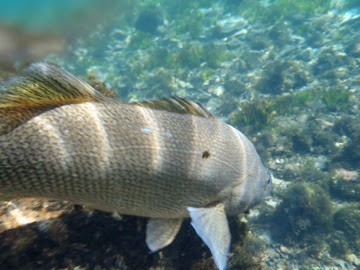 Above, native perca (perch).  Below, a fish rises during The Golden Hour. 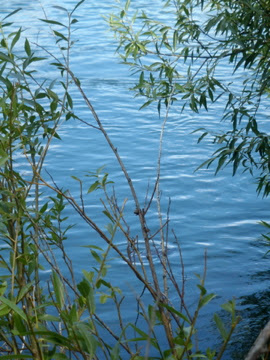 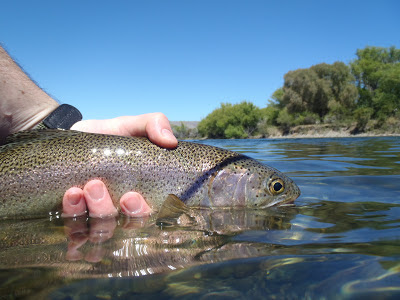 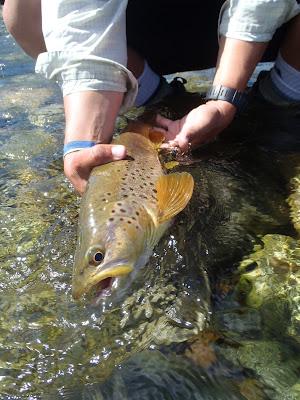 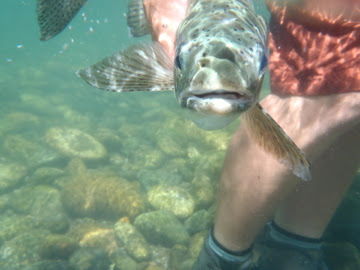 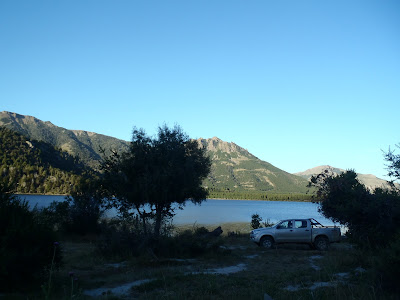 Hilux in its element at The Golden Hour. 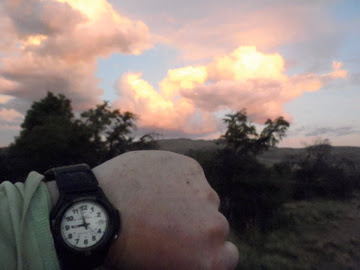 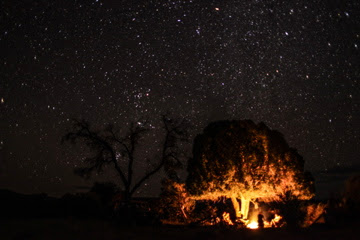 Of the many amazing and gracious people we met on our journey, one in particular sticks out that I'd like to speak of.  Husband of EC's ranch manager, below is Russo at work on our lamb lunch.  At the age of one month, Russo's grandmother crossed the Andes on horseback to her new home in the Chimehuin valley.  On his father's side, Russo's family bought extensive Patagonia acreage blind and then relocated from England over the course of 9 years to settle the region.  Patagonia and the Chimehuin valley are his home. 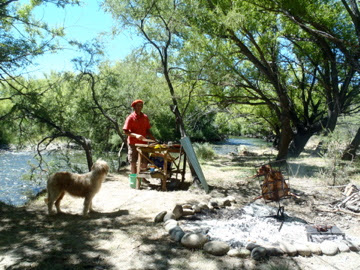 After splitting 15 years between Argentina and England playing professional polo, Russo returned to his homeland, meeting his gorgeous wife.  He is hilarious, witty, a jack-of-all-trades and does wonders with a blade, fresh meat and a campfire.  Below, venison tenderloin, peppers and onions.  Russo's opinion on dealing with the perils of the English polo social scene or the exhausting nature of fly fishing field testing:  "Somebody has to deal with this shit.  And that somebody is me." 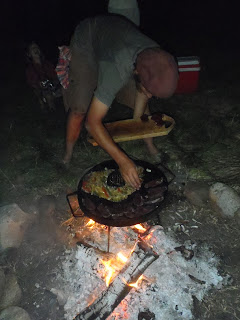 Drink of choice.  The coffee brandy and milk of the south:  Fernet y Cola.  Apparently it offers peace and approval.  Koozie shout-out to the Clem Corps.  ﻿ 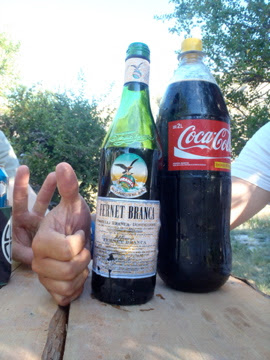 A million thanks to Nick, Jim, Amie, Russo and Clarita and the rest of the EC crew.  I'll never forget it and hope to find my way there again some day.﻿
Posted by Jesse Lance Robbins at 3:27 PM

Awesome read and pics dude. The only spot I hit on the Chimehuin in 2009 was the Boca at Huelchalafquen and that did not disapoint for scenery or fish. Can't wait to get back there someday

Unbelievable trip, and scenery. Crazy jealous. That shot of the fire under the tree is a wall hanger. Keep the adventures rolling my man!

Great trip Jesse! I assume the percha were the targeted species and las truchas the bycatch?

You are one lucky sumbitch, you know that? Excellent work again, brother!

Sounded and looked unbelievable Throbbins. Great post. That country is definitely next on my list. Second Wilkie on that campfire photo.