We are Tyler and Nick, roommates, current sophomores at Bates College, and the newest members of the BFC. Tyler first fished with Wilke on the Dead River this fall and got a sense of the ruckus ways of the BFC. However, Nick’s first experience came when we were invited up to the Salmon River by the boys to do some Steelhead fishing.

November 15, right after class we jumped in the car and drove west. We drove until city lights were in the rearview and deer lined the road. We drove to what most call the mighty Salmon River. We drove until 2:30 in the morning, and then we drank... a lot. Our first impressions of the BFC will never be forgotten, and for good reason as we were greeted by a bunch of drunken boys who welcomed us with the always grand gift of shots. As the alcohol flowed late into the night we learned more of the club’s legacy, our mission as the club’s newest members, and stories of past trips. We also found out that the days to come would revolve around steel, alcohol, and sleep deprivation.

Day 1:
Early wake up, not sure how we pulled this one off. We trucked up to the fly shop to pick up some licenses. The couple running the joint were not bashful to make fun of us two for smelling of booze, and bumping into sunglass racks. Day one proved to be a bit of a warmup for everyone with the exception of Clark, he seemed to be the only one able to hits. Indeed, it may have been the overconsumption of Paul’s Mezcal the night before, but it seemed like everyone wasn’t quite on their “A” game yet. Chet decided to sleep off his hangover on the riverbank for most of the morning, while Paul figured it would be a good idea to take a swim in the river with his waders on. Amidst the failures, Clark and Keith pulled it together and landed a few fish. Despite the long day on the water, we came to learn that no day of fishing with the BFC is a waste. No matter how many fish are netted, every day and night is always a great time. As we found out, ice chilled coffee brandy resolves the longest of days. These boys still know how to get after it! 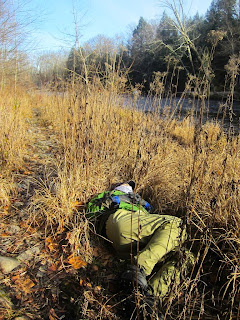 Chet sleeping off the Mezcal hangover 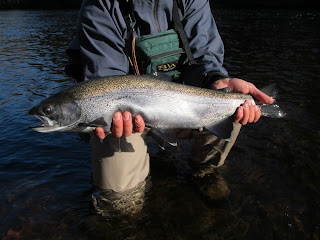 Clark's first fish of the day 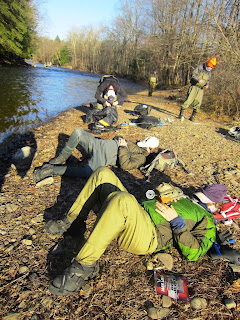 Napping was the common theme of the first day

Day 2:
The warmup day was over and there was a taste of victory in the foggy air. Today could be great. Infamous Port O’ Steele (Jesse Robbins) was due in around noon, and Nick Ford, Paul and I had adopted our steelheading names from the night before, and according to Wilkie no one catches fish until they have a steelhead name. Ford became “Built Ford Steel” Paul was now “Wetback Steel” after taking a dip in the river the day before, and Cali boy Schleich was donned “Shaquille O’ Steel”. The rest was history and everyone started picking up fish. I best describe my first taste of steel with the following:
In the town of Altmar, NY in mid November the air is cold, the river is low, and the fish are larger than anything that I had ever seen.  The grass and trees may be dead, but beneath the surface of the Salmon River, life abounds. With my only weapon a frozen rod, I trek through the darkness to the golden stretch of the upper fly. Waiting I hold my spot on the river as the sun rises. With the guidance of Clark I position myself on the stretch of the river that he knew the fish were holding. My mind focused and soul ready I knew my next cast would be one I would never forget.  The thingamabobber, split shot, and pink egg pattern splashed gently on the surface and sank perfectly into the zone. The current placed my line flawlessly in a row of riffles just above the pool where I believed a steel was waiting for his breakfast meal.  My blood shot eyes vigilantly watched the indicator fall in line with the current, bobbing among the ripples.  Suddenly, Bang! A strike! I whipped the rod up to the sky and pulled down on the line as my indicator screamed to the bottom of the river. The fish blasted off downstream as my reel sang and the line spilled out of the worn reel. Heart pounding, hands sweating, I chased my quarry downstream. Clark had followed the fish down river to swiftly net the slap. The instantaneous relief and joy that comes with netting your first steelhead washed over me, and I couldn’t help but smile and fist pump. Having migrated from the lake, the fish lacked normal steelhead coloring, bearing only stark silver strides, smoky fins, and a tinge of pink on the gill plates. I realize that this is not only the most striking fish I have ever caught but is one of the most fascinating. I finally returned the fish to the water after the picture and the monster gave one more powerful thrust of its tail as it faded into the gray torrent. I think it is only after you net your first steel that you truly understand the hype that comes with steelhead fishing.

The rest of the day was filled with hooting and hollering as most of the crew netted fish. When we finally got off the river at the end of a long day, celebration was in order. We headed to the nearest bar, and downed a few pitchers as we shouted stories of the day. Pissing off everyone at the tables closest to us, we talked and ate until we couldn’t see straight. 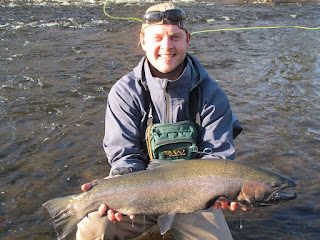 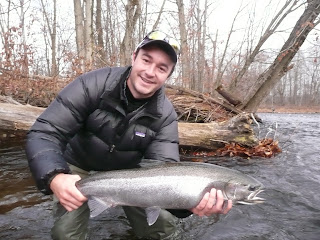 My first taste of steel 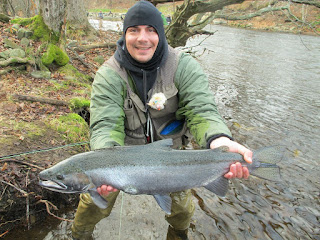 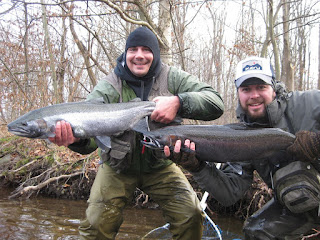 The dynamic duo killing it with a double 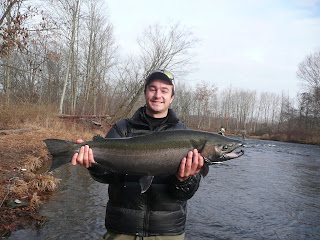 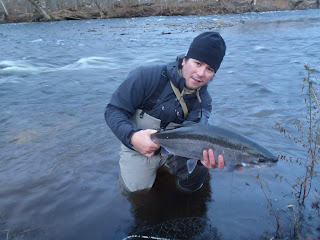 Robbins decided to join in on the fun 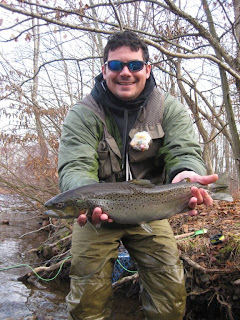 Even the browns decided to show up 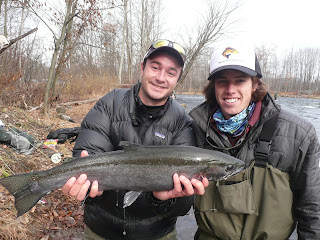 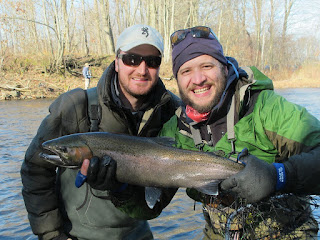 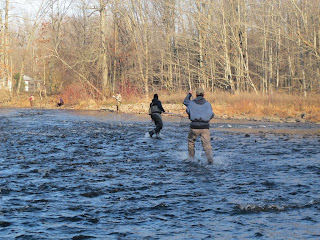 Clark going for the hail-marry run down the river

Day 3:
There was still fishing to be done on the last day of the trip. Ford being the only member of the crew who had yet to land a fish hit the water in full stride. Up and down the river he searched for the perfect hole. Fighting the odds he struck a small guy who put up a large fight. Fighting him left and right, he teased him onto shore into Clark’s waiting net.  Wow, what a relief, the trip was now a total success. Landing your first steel comes with an unparalleled feeling of success. Man vs. Wild style, those suckers put up a fight and it’s unlike anything else bringing them to shore. 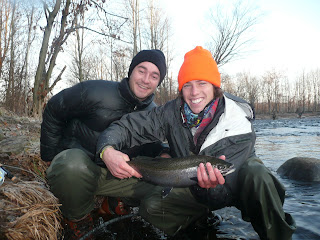 Driving off into the horizon on that third afternoon, we were already reminiscing upon the greatness of the trip. Going into a trip as blind as we had, our expectations had been blown entirely out of the water. Honestly, we never thought that middle-aged men would be so great to party with. These guys are the real deal and are some of the greatest legends of Bates. You boys were a real treat to fish and drink with. Thanks for the trip of the year, and we can’t wait to fish with you fellas soon.

Great report Tyler, I hope to see many more in the future. There is an open spot in the drift boat for you and your buddies anytime

tyler, great post bud. this sentence nails it on the head: We also found out that the days to come would revolve around steel, alcohol, and sleep deprivation. it was a pleasure to join you two in all of the above.

on another note, the is definitely the first time we've been called "middle aged men", eh?

A fine post indeed; may it be one of dozens more to come from these young bucks.

Also, Robbins, you took the words right out of my mouth....Middle Aged?!?! The entire group hovers +/- of 30 and college students consider us to be in the twilight of our days; what happened to 30 being the new 20?

Greetings from south America. Good first post boys. Enjoyed fishing with you and socializing with you. Ford, email me your address dammit so this middle aged man can send you your jacket!

A nice recap of your first of many steeleheading adventures. Sorry to be late to chime in on this post (abroad for the last 3 weeks) but this read is a nice "welcome home". Glad you boys had a good time, we'll have to do it again.