I made an impromptu decision to head up to the SR last week. Nathalia was out of town for work and I thought it would be relatively quiet around the office so figured this was as good a chance as any to cash in on some steele. Plan was to leave Wednesday after work and fish Thursday and a half day Friday. Unfortunately, I ended up with a work dinner Wednesday night that would significantly delay my departure. My options were to leave early Thursday morning and not get to the SR at first light or sack up and pull an overnight drive to NY and fish on no sleep. Being a veteran of the sleepless nights when canyon fishing I decided to move forward with the latter. At roughly 11PM Wednesday night, I left my dinner in Burlington Mass for rivers filled with seagoing trout.

Well, about a half hour into the drive I decided it would be a prudent time to confirm the SR flow. To my great dismay the river had blown up to 1100cfs at Pineville. While not unfishable, this flow was much higher than what I was expecting and not ideal for my plan to wade around and cover a lot of territory in the lower river. What to do, what to do... After about 20 minutes of deliberation, I decided to take a gamble and fish one of the creeks nearby the SR. Friends Kyle and Miles had recently fished a creek about 40 minutes from the SR (to remain nameless) and reported that it held a good mix of browns and steelhead. The men had given me some good intel on access points and fishy water. Why not, I figured. It wouldn't hurt to get away from the crowds anyhow. With that decision made, I rolled west into the dark night.

I got to the Oswego area an hour before light and found a MacDonalds to provide healthy morning sustenance. After the long drive I was exhausted, excited, and very much up to speed on the status of current events from listening to about 2 hours of CNN on Sirius. I waited until grey light to head down to the river since I didn't exactly know where I was going or which spots would hold fish. I had brought my six weight, which I rigged up with a small shallow water bead presentation, and my 8 weight, which would be rigged for deeper water presentations should I encounter any likely looking spots.

As the sun cape up I found myself looking at very small water, narrower and shallower than the Swift river in many spots. I worked my way up river scanning the river for likely looking holding spots and firing a few casts with the bead where I thought there might be potential. I came upon a small riffle that dumped into a pool that looked to be a couple feet deep. I fired the bead into the riffle and just as my rig entered the pool the indicator when down and I was tight to my first small water fish. 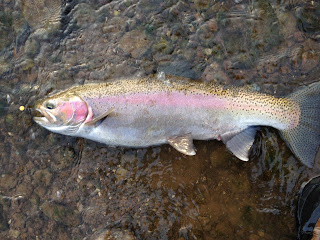 While it wasn't a slob by any standards I found myself a short while later staring at a 5lb rainbow. Was it a steelhead or a native trout? I'm still not certain. I released the fish and took another cast and wouldn't you know it I got another one, this one a hair smaller than the first but darker in color. Three casts after that I found a third trout in this little pool. This fish was a hair larger at maybe 6 pounds with a nice big stomach on it. My guess was that these were small steele. After a dozen of so more casts I pushed on finding the river slower and a little bit deeper. I came upon a slow shallow tail out and noticed a couple large v wakes. Did I spook those fish? Maybe. I could get any takes on my bead, although the water was so slow the presentation really didn't look right. I continued to fish up stream with no action. Hours passed and I worried my early morning flurry would be the last action I would see. Finally I found myself in a spot with a little current. After a handful of cast through this shallow run I watched a brown trout move out of the current and take my bead only a few feet from my rod tip. A short battle later and I had a four pound brown up on the gravel bar. This silver looking fish was clearly of the lake run variety. After a quick release I pounded the spot for another hour before giving up on this stretch of water.

I hiked back up to the car to try another access point further upstream. While having landed a handful during the morning, the action still felt slow. I had managed only 4 bites and was lucky to have landed all four fish. It was windy and cold and I was a tired man after pulling the all nighter. I hoped that the move might be a productive one. I parked by a bridge maybe a mile up river and hiked by some shallow looking water to find a nice deep pool. It looked like the prefect steelhead spot and I decided to pound it out here and hope for an evening bite. An hour passed with no action. I met a couple other fisherman in this section of river and neither angler had touched a fish. One claimed it might be the weather that was shutting off the bite, with the cold front coming through. I soldiered on fishing this deep pool, adjusting my indicator depth and about a half hour before dark I picked up another steelhead. This one fought better that the first 3 despite being no bigger. I was able to pull it up on the bank and release it. A short time later I retired for the evening.

On my way to the hotel I exchanged texts with both Miles and Kyle. I told them the day was slow despite having landed a handful, and that the bites were few and far between. The men suggested stripping a streamer, something with a nice zonker strip to give it action. Rabbit fur huh? It flew in the face of all the lake run trout fishing I had done in this area. But nonetheless it was worth a shot. The bead bite had been ok but not good. I bought a 6 pack of Labatt Blues and passed out in my hotel room around 7PM wondering deliriously if the Mayan Apocalypse would occur while I slept.

I woke up at a leisurely 6AM feeling much more refreshed than the day before. No apocalypse, just trout to be caught. I returned to the river near the first spot I fished the day before, planning to try out some streamers in the area where I saw the v wakes the day prior. My fly selection for this endeavor would be limitted. I had a bunch of weighted buggers but my unweighted rabbit fur streamer supply was only a couple of flies.  I began casting across to the far side of the river with my 8 weight. A dozen casts but nothing to show for it. Then, all of a sudden, it turned on. As I stripped my fly across the surface a large v wake appeared behind it, following my fly back to my feet before turning away. The next cast, nothing. Then another cast and another follow. Then a short strike that I missed as a large fish blew out of the water attempting to eat the rabbit. More follows. More misses. Then finally a big take. My tippet parted as I set the hook. Fuck.

Down to my last rabbit fur fly, a black zonker strip about 4 inches long. I went up to 8 pound tippet figuring I couldn't lose this fly. Would the fish take on 8 as opposed to 4? Yes they would. The fish wanted it. Finally I came tight on a fish and stayed tight on it. A brown colored rabbit eating beast. 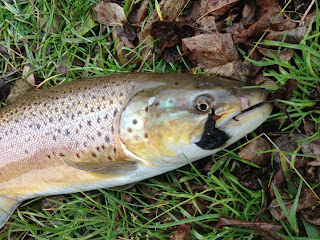 Over the next hour and a half I would bring 4 browns in the 5 lb class to the bank on the rabbit fur. No slobs, but all healthy fish, and all on epic surface strikes worthy of video that I did not have. For the 4 that I landed, there were twice as many short strikes and twice as many follows as misses. The action was hot, even if the catching was average. 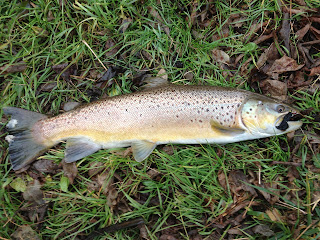 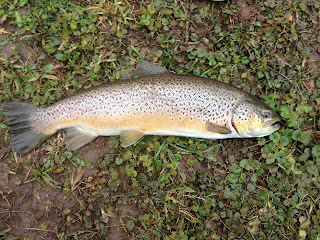 Then it slowed down. I fished for 45 minutes without a follow. It seemed like the hole needed a rest. I pushed down stream about 80 yards finding a similar looking hole on the far bank. First cast in with my now beaten up rabbit and I was tight again. This time a small steele. Steele eating rabbits? Who would have thought... 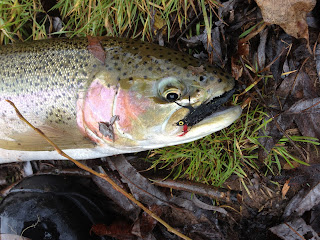 In summary, this next hole was on fire. I pulled five browns out of this hole including the one I was looking for. He came up like an alligator inhaling my fly down to the back of his throat and battling me all over the hole. He would tape out at 28.5 inches, my guess is somewhere between 8 and 9 lbs. Long, but skinny and mean. The surface strike was savage. 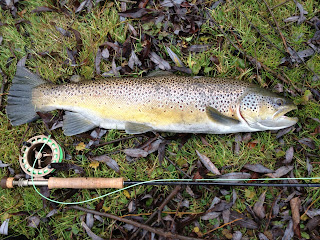 The rain that had been pounding me all morning was turning to sleet and I knew my time on the river was coming to an end. I decided to make one last cast before heading out. I placed my beaten up piece of rabbit on the far bank and  two strips later a fat fish exploded out of the water in a monstrous take. When I saw the fish breach it left no doubt that I was dealing with steele. A fat 7 lb fish with decent chrome coloration. 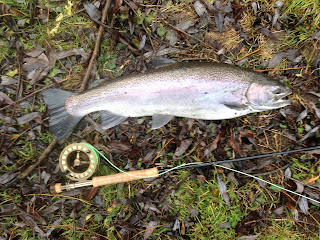 With 11 fish landed for the morning including my personal best brown I headed back to my car. I left New York fully satisfied, with a little more respect for the rabbit... 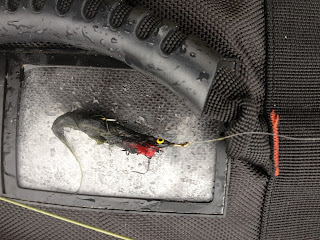 Email ThisBlogThis!Share to TwitterShare to FacebookShare to Pinterest
Labels: Ass Kicking, Big Eats, Brown Trout, Eat the Rabbit, it's a bird it's a plane it's a streamer, It's On, New York, Solid Hookups, Steele

respect the hare. did you fish Halle Berry??