Eyes On the Prize

Its October, we've been thinking about Steelhead season each night for at least six weeks and cranking out flies every night; eyes on the prize.  Flows hovered around 185 cfs throughout September but spiked two weeks ago to 350 cfs; reports from people we knew were stellar, internet reports were solid, forum reports were spectacular, eyes on the prize.  We hemmed, we hawwed, we pondered, we considered, we booked, we took a day off, eyes on the prize.  We drove, we checked in, we observed multiple text messages on our phones at 9pm Thursday night....flow nearly tripling to 900 cfs that night; you've got to be shitting me!

This is all too often the hand that I have been dealt when fishing the Salmon River.  "You should have been here last week" or "Its going to be phenomenal in a few days based on this spike in flow" has rung from ear to ear in my head on a number of past trips.  I would like to take a moment to express that I will personally drag the next person below the surface of the SR waters if I am told this again.  So began the the first BFC trip to Western NY during the fall Steelhead season of 2012....deep breath....we rigged up, slept, and took to the water early on Friday morning.

This was Maxfield's (Steel Leader) first Steelhead trip.  I brought he and Ethan (both young gents I work with) up last Salmon season and it had been a bust under similar increased flow conditions.  This trip was shaping up to be very similar; it was looking quite likely that the man may never return if Jasper and I were unable to pull off some heroics. 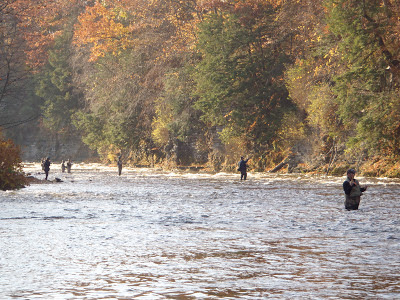 We stuck to the original plan fishing just upstream of the DSR.  We were standing in the water by 6 am an hour before legal fishing.  The crowd grew as the day warmed, eventually doubling the amount of people you can see in the picture above.  The large crew upstream of us coupled with a similar crowd below us did little to raise our spirits.  The water was littered with leaves, carried a heavy sediment load along with a large quantity of dead salmon and garbage.  The flow had not reached such levels since the spring and everything that had collected along the banks since then was now in the water, serious buzz kill.  We left this position by 10 am. 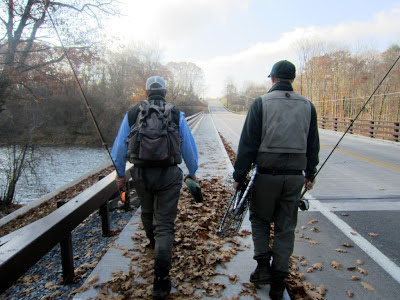 After a quick check at the uppermost stretch of the DSR and a conversation with some down trodden Russians we decided that a move upstream was in order.  After a round of sandwiches we began our trek into the Fridge.  We arrived to find fewer leaves and less color in the water.  A quick conversation with a professor from Virginia didn't give us much hope.  We fished, we met a group of cats from DC who were in their low 30's, we sat, we bullshitted, we drank a couple beers and we fished some more.  We talked to countless driftboats rolling through, same story, no fish.  We moved on to the Altmar stretch to fish some famous river left pocket water. 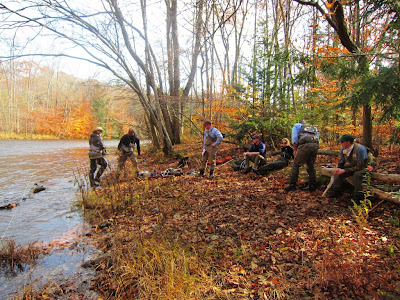 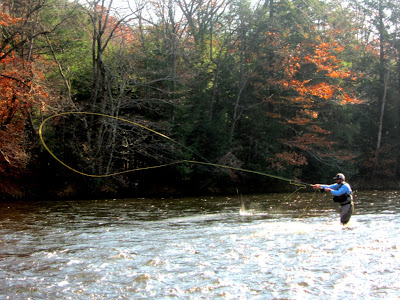 Altmar was a bust as well, plenty of guys on river right, things looked fishy but there was nothing fishy about this day.  We retired to the Altmar Hotel for seafood platters, beers and Velvet Elvis shots.  Day 1 was over and we held onto hope that Day 2 after the flow increase would produce fish that had settled into the high water.  We had pre-purchased tickets to the DSR for Saturday so a plan was in motion.

﻿Tickets to the DSR this season are $45 which is a tough pill to swallow unless you have a good idea that things are going to be productive.  We couldn't do much worse than Day 1 so the money was the last thing on our minds.  We settled into the Flats at the bottom of the stairs and I almost immediately tied into a fish, a battle ensued, fish was twice to the net and the hook popped as the fish was a mere foot from victory.  A nice fat chromer casually swam back into the depths, if she had a middle finger it would have been high out of the water aimed directly at me.  The place went cold after that; we saw nobody tight and touched nothing else other than leaves.  Downstream we trudged. 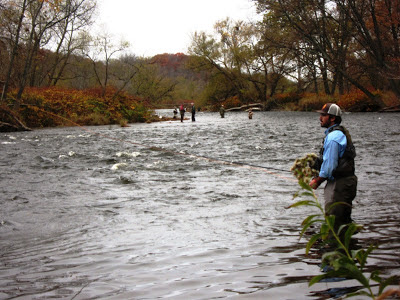 All the way down through the DSR we heard the cries of angry fisherman.  At one point I heard a guy yell "F*ck this we're leaving for Altmar!"  Lines and lines of fishermen with nobody tight.  Down through the Meadow we went with similar reports.  When we got to the end of the line we came across a bit of promise.  Two driftboat guides had motored their clients up into a run and were frequently hooked up.  Would they leave?  We had little else to consider so we hunkered down and enjoyed some great conversation with a couple of guys from Holland who had just flown in for a week on the river.  One driftboat left, the other posted up and then left.  By 2:30 we were standing in the hole alongside a guy from NJ that knew the driftboat guides. 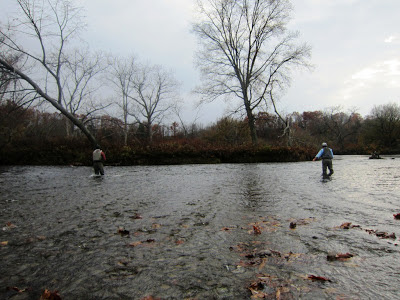 I went tight, fish threw the hook, NJ guy went tight, he went tight again, then again, oh wait.....then he hooked another.  This was maddening, he was fishing a spinning rod, we were on the fly, and obviously he was in the money spot.  We buttered him up, hooting and hollering at his every hookup, and eventually Jasper got him into a conversation.  "Our buddy Maxfield over here has never landed a Steelhead", the guy was on it.  Immediately he put Max in his spot giving him detailed color info as well as highly specific drift tactics.  The guy knew the spot well and bless his soul he took pitty on us and lined up Maxfield for success.  After a couple Steele dances that ended poorly, old Maxfield put chrome in the net, his first ever.  The guy from Jersey beamed like a proud father. 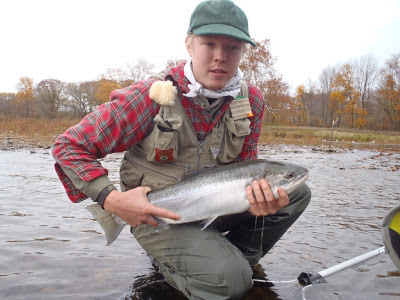 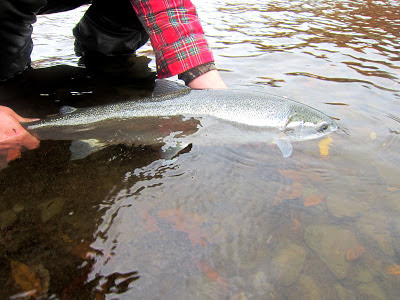 After a couple more hookups for each of us, one botched by on old geezer closing in on our position, Max closed out the day with a domestic Rainbow; Mahoney thumbs up were in order, the kid had just put a smile on our faces after two painful days of fishing. 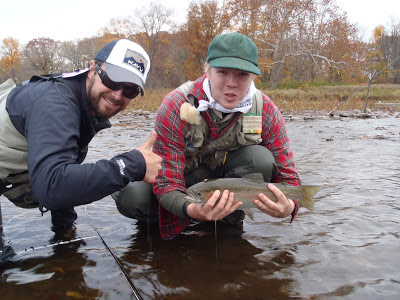 A quick time check....5:37p.m.  We had over a mile to cover to get back to the parking lot and escape the gate closure by 6 pm.  Three men busted ass this day, made it to the car with 4 minutes to spare and got the hell out of there.  That night over beers, pizza and cake we celebrated Jasper's 31st birthday. 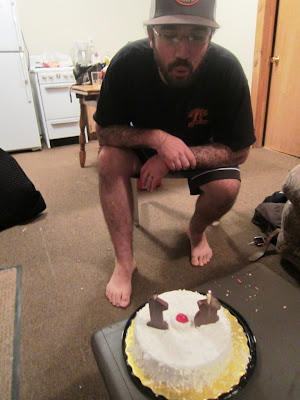 As we lay in bed that night, we chatted like a bunch of 18 year olds in a doormroom with the lights out.  The plan was in Jasper's hands as Sunday was his birthday.  We were headed for the last stretch of water in the river system that we hadn't fished or investigated in the previous two days....the fabled Upper Fly.

The snooze button was hit a few extra times on Sunday morning, no matter though we were a stone's throw from the parking lot and nobody could cross the river to the side we would be hiking into, crowds would not be a concern.

We settled into the BFC's favorite glide in the upper reaches and once again I came tight; once again the fish had other plans and threw the hook, this was beginning to be a thorn in my side.  It was early, perhaps this was a good sign.  By 9:20 neither we, nor the half dozen people on the far bank had touched another fish.  We had an hour and 10 mins to make something happen before we had to leave the river so we ventured downstream.

There is a tree, a tree we have caught many fish near, and when we approached it there were three people already fishing there.  We nearly bailed on the day.  There seemed to be room for perhaps two of us and as we began fishing the guy below us went tight and his buddy upstream offered us his position so he could help his friend, all three of us now had a position.  30 mins left in our trip.  Tight, snapped, tight, pulled hook, tight landed, tight snapped, tight pulled hook, 5 mins left, tight landed.  That was our last 30 mins of a stupidly bad trip.  War cries, pictures, and fist bumps ensued. 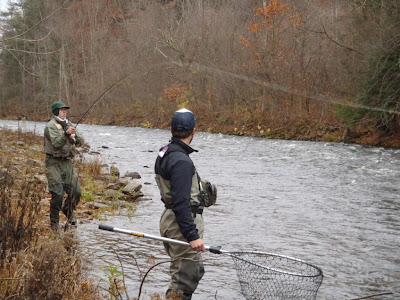 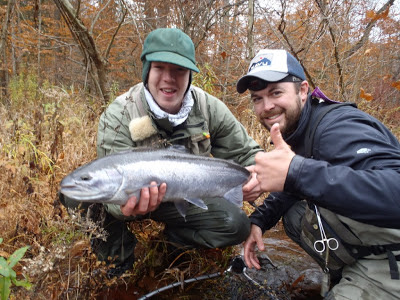 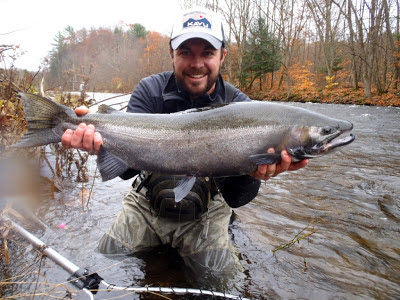 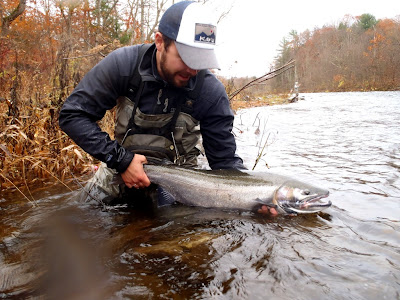 Love it or hate it, thats Steelhead fishing.
Posted by Andrew Wilkie at 11:07 PM

can't wait to join you on those waters in a few short weeks my friend. that will be victory enough for me!

Glad you boys were able to squeeze some silver from that bloated river! Nice work!