Earlier this week Mr. Kornfeld called and had the idea of going fishing at an alpine lake in the Olympic National Park, I said I am in. During the week we looked at weather, and old trip reports about the hike. We tried to prepare ourselves, but if anyone has researched hikes on the interweb, the data you gather is often pretty puzzling. You do not know if it was a person's first hike ever, how old they were, what kind of sneakers they were wearing, what their resting heart rates are, and other vital information that I like to have in order to compare myself to the other people hiking. So after we scanned and analyzed the information we knew two things; the weather was supposed to be gorgeous and the hike was supposed to be steep.

We left early on Saturday and signed in and started our hike. It was steep and we got turned around a few times, but 4 some odd hours later we arrived at the lakes. There were three lakes nestled in between some large peaks and huge trees. We rigged up our rods after dealing with the exhaustion from the hike and then started fishing the largest lake. Caught some 3 inch long rainbows on ant patterns, but that was not really the rush we were looking for after the arduous hike in. We moved on to the middle lake, which looked like something on the moon and we were skeptical about the trout habitat. There were some submerged boulders and logs, so we decided to try it out. I think three casts in or so, Zach hooked up with a fish. His rod was doubled over, it was a big fish! He got it closer, it was a big cutthroat! He landed it, it was the biggest fish he's ever landed on a fly! It was awesome to watch. So there were fish in this moon lake and we started seeing sporadic rises and just cast to those ripples and the fish were eager to eat. We caught some very nice cutthroat that were bigger than anything I expected to catch at these remote lakes.

We left the camp the next morning, hiked the long journey down, drove to the bar, got burgers and beer, and watched football. It was a fun time with a good human. Here are some pictures. 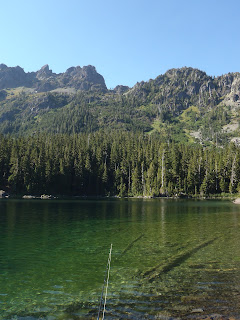 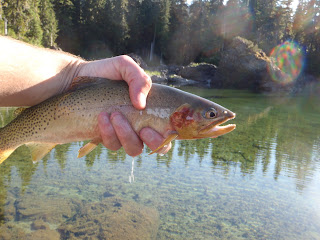 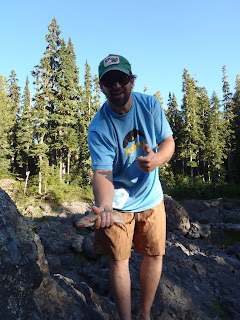 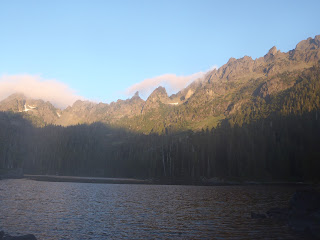