Forgot my reel of course, but when you swig several brews with your old mate JLR, drive 6 miles down valley, and then 6 miles up a twisting forest service road, pitch tent in the dark, swig some Jameson while the Western stars dance in the sky, smoke a cigarette from the tent hatch, sleep on some rocks but don't care much, and then wake up, it wasn't much of a surprise to anyone that one rod, 6 boxes of bedraggled flies, and three humans were all packed into a car minus one reel. 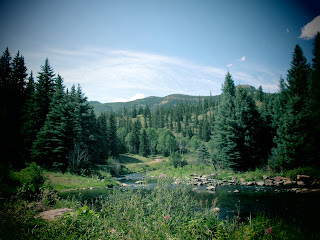 Didn't change the fact that you could see the fish, a lurkin' under the surface like a nervous rattler under some forgotten adobe, unseen by most.

Threw them a wriggling hopper, but I might have shook it too hard, it didn't wriggle much when it hit the creek, and several denizens of station 15 turned an uninterested eye at it before about facing into the cool current.

Lapse in angling protocol aside, forgetting that reel made me want to drop the 400' into the dusty, serpentine expanse of the Rio Grande gorge with a chunk of Osha root on my hip to ward off the snakes, reel snug in my roll-top bucksack, and get acquainted with a few of station 15's long lost desert amigos. 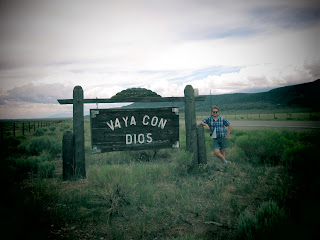 machias, i was just now trying real hard to come up with something to say that would do justice to your tale here, you know, that piece of awesomness i just encountered and read, but i couldn't, so i'll just leave it at that.

Pete you could not have said it better . Beautifully written Machias

Thanks for the read, but I would've expected "ol' barefoot schoen" to be barefoot, no?

The missus keeps making me keep mah shoes on!

jus' a snake in the grass, ain't ya schoen?