Inflated Deathring of Hydrogenated Oils or: How I Learned to Call Them Flies

I spent a large portion of my youth with family like Terry, in Central Washington, fishing reservoirs with lures.  Lures were what you used to catch fish.  You bought lures in the same stores where you bought your beers and your infiniteconveryed fried stuffed things and your smokes and then you went and got fish.  This was good.

Except that old fishing buddies grow old and decide they want to spend money and buy fly rods. And Halsch and JLR (Justly Lording Riverslut) move to the PNW and if I wanted to spend any time at all with them I had to pretend like I hadn't quit dipping and go fly fishing.  Which I did, over and over again, with no fishy success.  This too was good.  I never stopped liking dip.

And then James took me for another round of cutthroating and I hooked one and he hooked one AT THE SAME TIME and it was beautiful and magical and there was a rainbow and it got away but it was everything I could have ever wanted and wow, just wow, pass me that fucking tin and lets do it again.

So we went east to the Yakima last weekend, following my ancestral roots in search of raucous BLM parking lot scenes and trout.

With Waka Flocka ringing in my ears and JLR (Jovial...Loving...Rebel) at the raft's helm we shoved off.  The first few hours were slow, the sun still high, and the river littered with Yakima's finest human parade.  Most flotillas were groups of 6 - 10 twentysomethings, drunk and yelling and enjoying nature; save the quartet of lovely young plus-sized women cranking cigs, with each individual tube anchored to the beer-cooler-turned-snack-pit housing every last brand of potato chip known to man.  Not a beer in sight.  As they drifted slowly past, one of them managed a garbled, "It's all about the fucking rapids." Yes indeed my dreamboat, yes indeed.

After a quick lesson in terminology, (JLR (junior league rugby) reminding me, very politely, that they're called flies, not lures), and a swap over to a dry fly, lightning struck twice and Halsch and I simultaneously had trout on. Exciting. Lost it. Whatever. We bustin' at 'em. 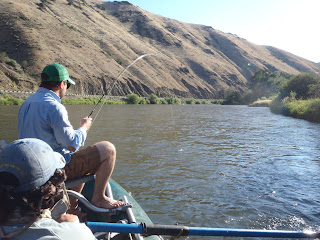 JLR (Jaunty Locks, Raven) had the raft cruising alongside the bank like it was on a track and finally, finally, I got into one, and managed to bring it in.  I've been knee-deep in thousands of pounds of writhing sockeye while gill-netting in Bristol Bay, but I've never experienced joy from a fish like that little rainbow.  Awesome. 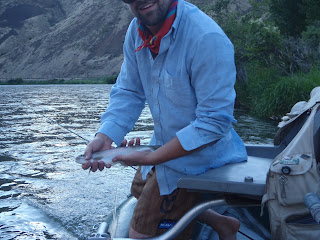 Finished the float with some more serious trout action and a tiny blond thing drunk and speechless on the boat ramp.

Thanks to Halsch and JLR (JupiterLionRenegade) for the guidance and patience.

Ha. to all viewers I suggest going to 1:55 in the music video. wakka flocka loves fly fishing too.

Kornfeld, so good to hear from you my man. A fine trip, a great read and a feeling that any true fisherman can relate to. Well done

Good to hear from you old friend. Can't fly without the chew, they are symbiotic evils. Glad to hear you have liked up with Halsch and JLR (JACK'Livin'Recklessly).