Last weekend when Dad and I hit the water a friend of mine managed to sneak out for a few hours on a river just northwest of where we were fishing.  He arrived mid day and fished for three hours, most of which were completely fishless.  Suddenly he noticed a few large suckers on a gravel bar and shortly thereafter a pool filled with beefy Brook Trout jockeying for position in a slow run.  He was witnessing the start of the fabled Sucker Spawn and he proceeded to land one after another.

Throughout the week I had difficulty not thinking about it.  Friday came around and I was offered an opportunity to check it out for myself.

I arrived around 6:30am to a heavy mix of rain and snow; no other vehicles in site.  With no competition for slots on the river, I fished my way downstream toward the gravel bar where the suckers had been a few days prior.

I stung zero fish in the first hour as I closed in on the spot.  As I walked the high bank leading up to the gravel bar I tossed on the Costas and peered down at the shallow gravel area.  Thirty or more large suckers darted around attempting to seal the deal on their annual spring ritual....game on.

If you are a Steelhead fisherman then you could have gained a great appreciation for the way I attacked the water behind the spawning Suckers on the gravel.  Several drifts in the first run and I was tight. 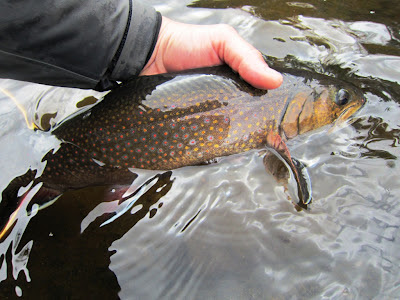 The action didn't stop.  While I was crouched down taking a picture of one of the trout a guide emerged from the woods with a client.  They hadn't noticed me as they came down through the woods and I startled them as they stepped down along the river.  We began talking and I enjoyed the guy.  A UMF grad in his early 40's who guides full time out of Kingfield.  He had the right combination of fly fishing badass, hardcore Mainer, and a touch of the crazies.  I thought to myself that I'd like to fish with this man, so I invited him and his client into one of the riffles where I had been making quick work of the trout. This paid off for me the very next day and on this outing the guide John netted one of my fish and graciously snapped a picture for me. 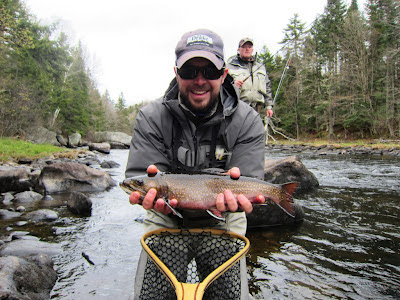 With the way this season has been going I've begun carrying a digital scale and a soft tape measure out of curiosity.  I've been weighing them in my net and taping the majority of these fish.  A man can estimate the size class of the fish he is into but I've discovered that your eyes often make a fish longer and heavier than it actually is.  When someone tells me they were catching 5lb Brook Trout I'm always hesitant to believe it. A 4lb fish in person looks outrageously massive and the elation of having landed it quickly has heavier weights and longer lengths rolling off your tongue as you tell your story. 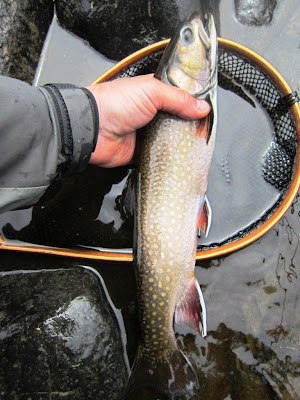 When the 12-16" deep riffle behind the suckers went cold I'd shift to the slower moving deeper run below it and immediately be back into the action.  When that slowed it was back to the riffle and again it was on.  Back and forth I moved and the bite continued.

Of the roughly two dozen fish that came to net, not a single fish was under two pounds.  The icing on the cake came in the final hour as I coerced the largest Brook Trout of my career to the bank.  Still smiling about this 4lb 5oz  22.5" behemoth. 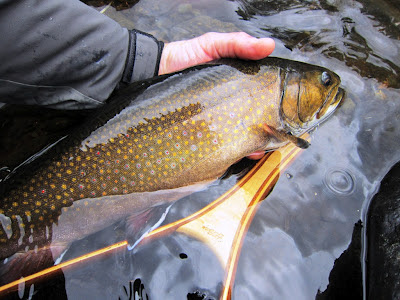 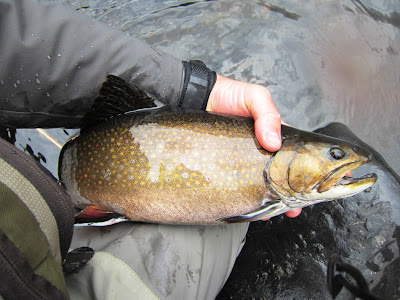 I only wish I had one of you along to experience this unbelievable day; one for the ages.
Posted by Andrew Wilkie at 9:11 AM

that is an awesome fish. Nice work

Good grief. Way to lay it to 'em old man. You've got some fight in you left.

Nice! The spots on that first fish are awesome.

Slobs! Nice work Wilkie. Wish I had been there...