Catchin' the Bug with Old G-Dubb

My old man is a fisherman.  He enjoys catching fish, the camaraderie, the adventure, but while he can handle a fly rod, the fly fishing bug has never really bitten him.  Last Sunday (5/6/12) I invited him on an adventure; he took the bait and after an hour drive, four miles by boat, and a half mile hike we were fly fishing in earnest. 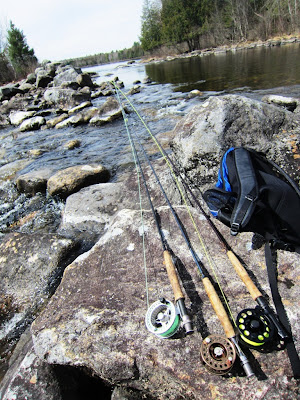 The flow was a modest 400cfs and we made quick work of a few nice salmon in the second choice run as the first had a few older gents already occupying it.  As the fishing slowed we crossed to an island and worked above where we picked off a few brookies and salmon in what I'd consider the third choice run. 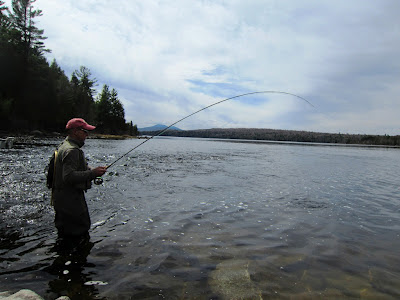 A few fishermen thinned out and we were able to slide into position across from the gents fishing the prime run.  We bullshitted throughout the morning as we caught one fish after another on sinking lines with streamers and floating lines w/ nymph rigs.  With limited room on our side of the run, we more or less made due alternating rods and positions and essentially unleashed an epic afternoon. 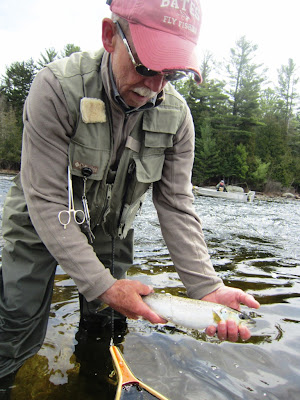 One must catch fish consistently in order to truly catch the fly fishing bug....we may have accomplished this as we lost count of the fish after we landed our 20th specimen.  Trout and Salmon ranging from 13-19" were the mainstay. 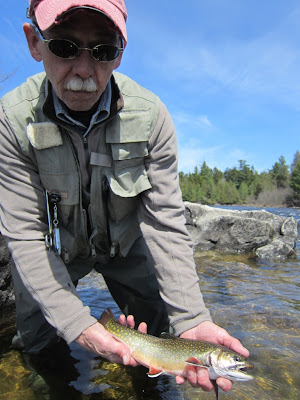 And if you're not personally catching the pigs its awfully damn encouraging to know they're in the water that you're flogging. 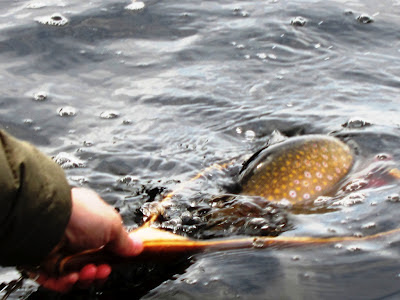 His fly fishing fever may be setting in...... 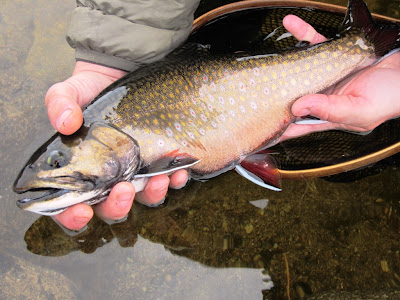 Side Note:  We both witnessed on two occasions a brook trout (the size of which I've never personally witnessed) absolutely body slam and bite two separate Salmon around 16" that we were fighting into our nets at a range of less than 10ft.

Fast forward a week to this very day.  One of the gentlemen that was fishing across from us last weekend turned out to be someone I knew through the grapevine and we both had heard fishing stories about one another.  We became quick friends that day and he offered his boat which was chained up in the woods from a southern access point.  A plan was instituted for my father and the mutual friend of this legend to join forces and go back for another round today.

400cfs last weekend rose to 800 cfs yesterday which is an ideal flow.  The three of us arrived at the boat around 6:45ish and reached the fishing spot around 7:15.  I immediately hooked a salmon in the second choice run (1st choice run was filled with guys yet again).  The day appeared to be starting off on a good note. 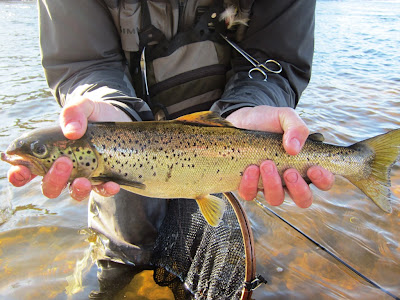 For the next hour the group went cold.  Dave hooked a fish briefly but that was it.  As quickly as it began everything came to abrupt halt as we watched the flow rise from 800 cfs to roughly 1200cfs.  With the increased flow came dirty water and shoreline debris....game over.  We hopped in the boat, motored to the lower river in a last ditch effort to outrun the flow and in the hour or so we managed there before the high water caught up with us we went 0 for 0.  Major bummer.  Audible called.  Back to the Toyota for a run to another river that treated me better than well just yesterday.  Hopes here were dashed.

We arrived at River B around 12:30.  Four cars at the pullout; I feared this.  Yesterday however I made good on allowing a friendly guide and his sport into the spot where I was crushing.  Paid off today when he was at the same spot with other clients and relinquished the position to the three of us.  He left by stating "Its not like it was yesterday; good luck" 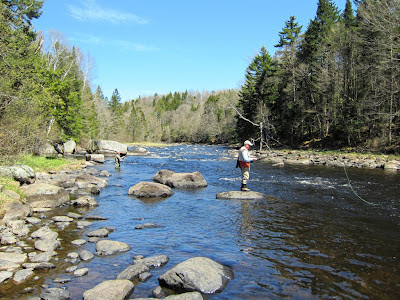 The flies that worked so well yesterday on a cold drizzly outing held no stock today.  The bluebird skies all but ruined that dream.  So we took to working 18's & 20's of the nymph variety.  We could see the trout and eventually we struck.  We went two for four in a couple hours with me missing an NJ for my old man on a beautiful fish.  He saw how big it was and I wanted it more for him then I'm sure he wanted it for himself.  I never struck the fish but it darted around a rock and sheared the leader.  He was elated to have danced with the great fish, I was devastated that I couldn't capture him holding it.

After this battle I settled in trying to tempt a nice trout I could see holding along a boulder.  The indicator was spooking the fish so I removed it.  The fish would shift to the right and left each time my nymphs rolled perfectly on target.  After many pattern changes I saw him begin to feed.  He would rise up off the bottom by maybe a foot, open his mouth, and fall back to the bottom.  Beadhead pheasant tail in the lead followed by a partridge and brown wet fly was put into action.  The wet rode high as the beadhead ticked bottom; on the third cast the fish rose slowly and took the wet.  We danced, and at the buzzer it came to net.  G-Dubb has got the bug. 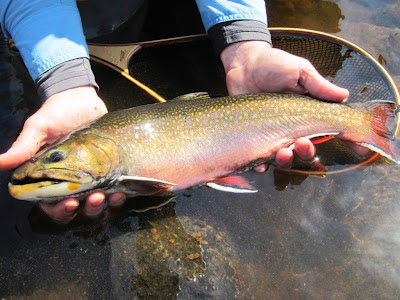 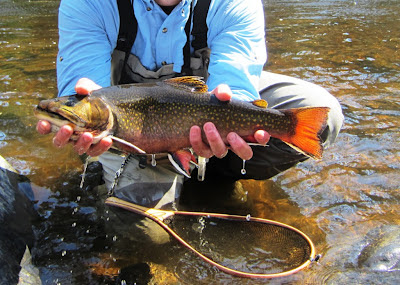 hey buddy, tried to rotate the photos for ya, but Blogger kinda sucks. But I shrunk a few of em so it wouldn't break outside of the space.

looks like a solid trip, when are we going back up to Pittsburg this summer?

Wicks, those are some hogs ! Nice work son and nice hat G-Dub

pretty fish there! save some for me, would ya?

That last one is a monster. Well done sir.