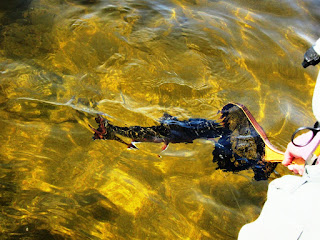 The phone rings, I glance at the clock, 7:43 PM, then back to the phone: "Andrew Wilkie". My date arrives at 8 PM, when the Celtics kick-off game 4 against the Sixers. "Shit", I think to myself as I reach for my mobile, this is going to get interesting...

Beep, beep, beep I've barely slept two hours, lingering between a sleepy stupor and a confused drunken state as my consciousness stammers back to reality - 1:30 AM and I am already running behind schedule, shit again...

My red Subaru careens down the rocky logging road as I slam to a stop next to Wilkie as he stands next to his 4Runner. "It's 5 AM Winchell and there are fish to be caught" he jocks. "I know, Old Man, I know", I manage. A firm handshake, a swig of whiskey and we are off again.

The day starts slowly for us as we took to the water in true steelehead form. Running egg patterns under indicators is a well versed technique to those who frequent Pulaski. As the day warms, more suckers move onto the beds to engage in the spawn and the fishing gets better with this influx of activity. I strike first with the below fish (personal record, soon to be toppled).

And the fish keek coming: 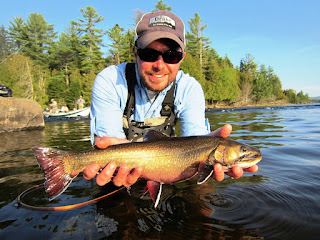 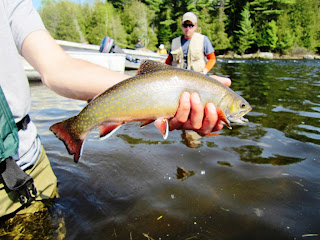 Salmon enter the mix in numbers as we continued to flog this pristine Maine waterway on this cloudless, bug-less 75 degree spring day. 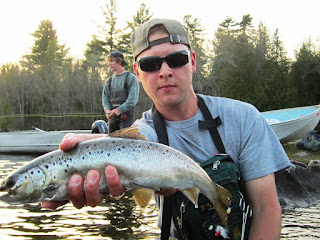 As the day waned on, the fishing increases in intensity, staving off the delirium. Wilkie has told me stories of big brook trout coming after 12-15" salmon that are on your line. I have always listened to these stories with a degree of skepticism, as should any man who is presented with such a fable of madness and wonder. I can now say that I have witnessed this assaulting of a salmon not once, nor twice but 6 times on this day and one of these fish eventually grabbed my dropper in it's attempt to massacre the "small" salmon. Game on. 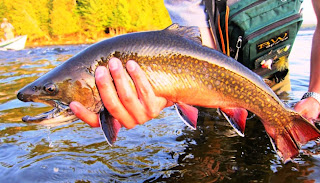 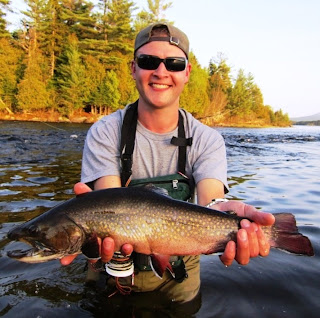 This fish was a kiss shy of 4 lbs - a stunning specimen. Whiskey was next to take advantage of the  hot bite with a fish in the 4 lbs class of his own. 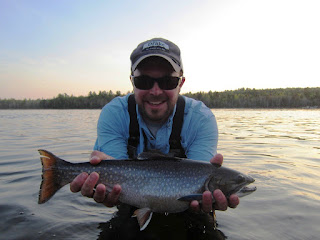 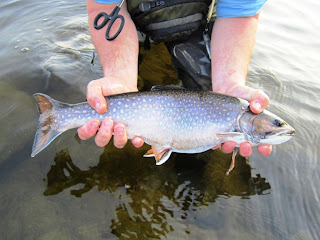 We landed 15 brook trout, smallest being in the 16" size class, and roughly 50 salmon.

On May 19th, I managed 16 hours of fishing, 6 hours of travel and 2 hours of sleep, a ratio I'd like to see reflected in more of my days. I'm ready to do it again.
Posted by Clark Winchell at 2:24 PM

EPIC. That's one of the meanest looking brookies I've ever seen Clark. Any idea how much longer the sucker spawn is on for?

Well my friend, a 60-70 fish day doesn't occur often, neither do personal bests or sleepless 2am departures from Boston to the Maine wilderness. This will be one of those trips I personally will never forget. I scoff at your just shy of 4lbs assertion; folks it was 3lbs. 15 oz.....you are welcome to call it 4 as far as I'm concerned! The humpback and long jawline on that fish make it look easily 5lbs. You are welcome on these waters anytime my good man.