I took a trip up to the SR with Alex and Bailey over the weekend. The flow was up the prior weekend and the bite had been good so our expectations were high as we waited for our selected steelheading dates. Unfortunately, the flow dropped out on us big time right before the weekend, going from 1500 to 500 in a 2 day period. This had me a little alarmed and I warned the guys not to expect too much in the way of action given the signficant flow change right before our trip.

This would be the second SR mission for Alex and Bailey. They joined Clark and me for the last day of our 6-Day Steele Marathon in November and after getting into some fish promptly caught Steele fever. They returned home from the SR, made the investment in their own fly gear, and scheduled another trip west. I was hoping that they would get to break in their new set ups, and in fact they would have that opportunity. Alex and Bailey are both excellent fisherman and I have had the pleasure of tuna fishing with them on several occassions. In addition to being great on the angle, these guys are stellar chefs who arrived at Mahoney's with a full grill. Delmonico Steaks after a day a steeling anyone? Uh, hell yes!

Day 1 brought a flow of 500 and an epic blizzard. Tough conditions to fish in. We went to a spot in the lower fly that I thought might fish well at the 500 cfs flow. We got lucky and it didn't take long before the rods started bending, and so long as the snow was flying the bite didn't stop. All small eggs, fished along the bottom or drifted under indicators. It didn't seem to matter color or method, the fishing was on fire. It was white out conditions, and it was insane!

Sometimes you get lucky and you just have one of those days that when you look back at it, you can hardly believe what went down. That was Saturday. By the end of the day, somewhere around 35 fish had been landed between the three of us, with north of 80 hooked. We were doubled up 5 times leading to my first ever double steele net job. Alex and Bailey had me running around with the net all day. As Robbins put it, the fishing was "fucked", and we were loving it.

Day 2 had us fishing 335 cfs and under sunny skies and the fishing wasn't anything like the day before. There was an early morning bite and then it slowed down to a slow pick. I focused on fishing the fast pocket water above the run and was rewarded with a few fish while Alex and Bailey stuck to the same run and pounded out several more. Total for Sunday wasn't all that bad, with 9 landed and maybe 25 hooked, but it felt like a crawl compared to Sat. 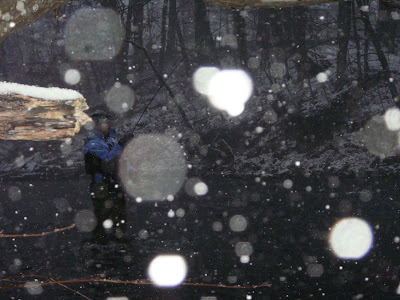 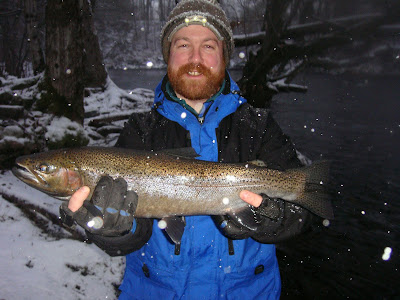 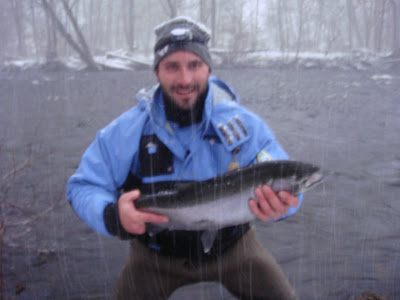 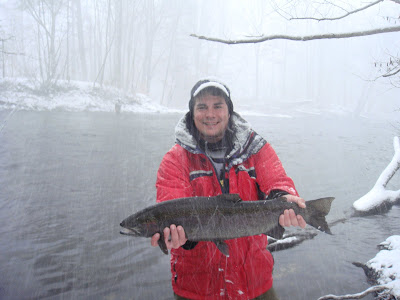 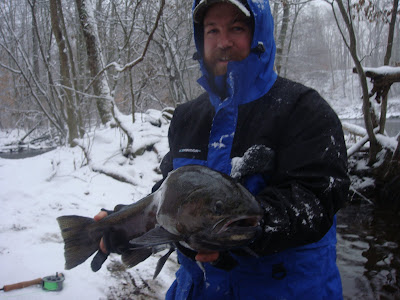 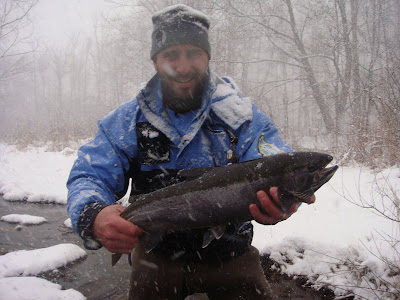 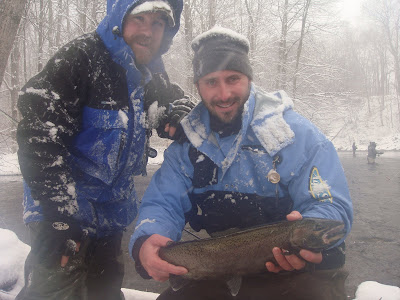 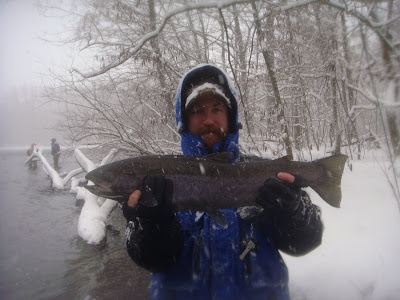 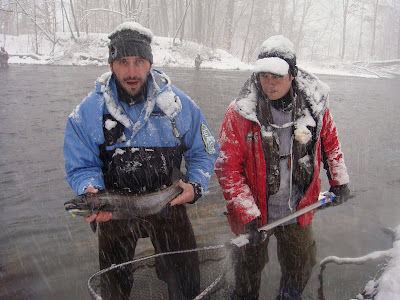 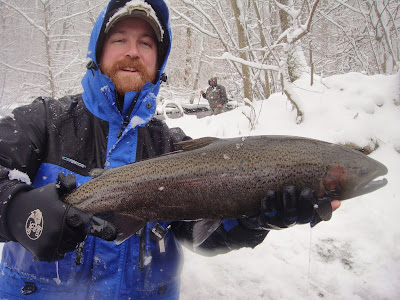 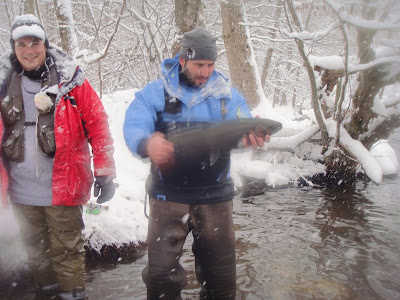 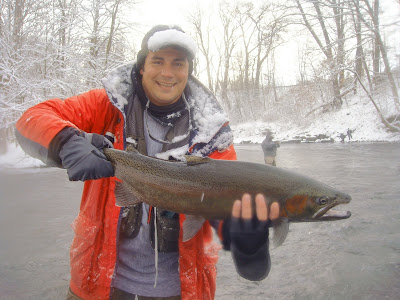 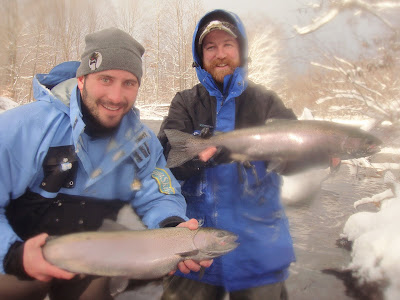 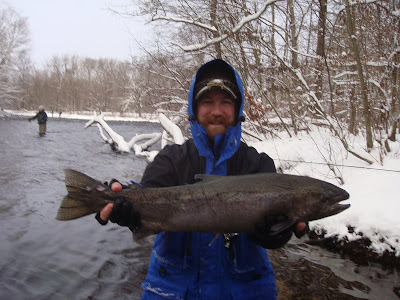 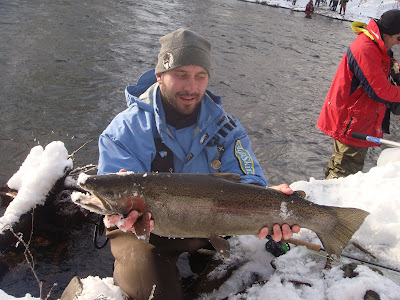 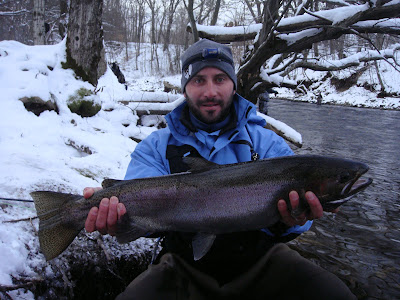 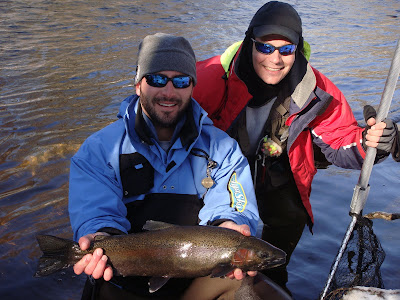 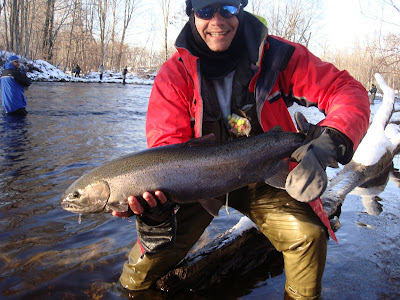 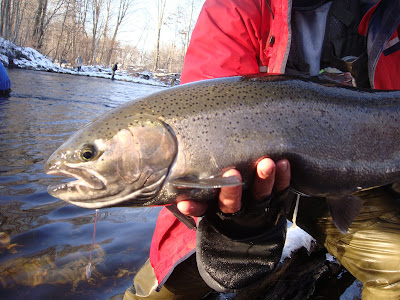 leave the net at home next time would ya

wow...it is in your large footsteps that we head west...i just hope there is one steele left in altmar for me. well done boys!

Wow. Chasing around trying to net fish is certainly the way I like to stay warm. Well done Dr. and others. Where was all this 'fucked' action back in October!