A call at the office on Wednesday morning would have me conducting some product R&D on the peninsula on Thursday. This was good news. After last weekend's outing, I had been thinking about steelhead all week but knew I wouldn't get a chance to get back to the peninsula until Christmas weekend. So after work we rolled north and west, checked into the Dew Drop Inn for all of seven hours and were on the river twelve hours after we left Bainbridge. 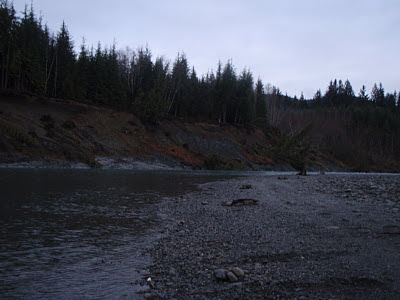 Our plan was to indicator fish from the boat in between swinging water, and then break out the two handers when we got to those stretches. We ended up swinging flies through only one piece of water, but it happened to be the exact same piece of water that my man Paul stuck his great fish last weekend and James and I both had our very brief encounters with steele.

It's funny (or is it?) how confidence comes into play when you're on the water. I approached this piece of water with confidence: I knew it would hold fish, I had a good idea of the cast I'd need to make and I was optimistic that a fish there would chase a swung fly. With that in mind, I stepped into the top of the run with the same 6116 switch rod I cast last weekend.

It seemed to be too perfect of a scenario, and yet it happened. Half way through the run, my mind thinking about who knows what, my swing true and tight came the pull I was looking for. Immediately the fish blew up the water and was off to the races. And then it was in the net. My first Pacific steelhead. On a swung fly. A wild fish. In camo waders. I think I'm spoiled. 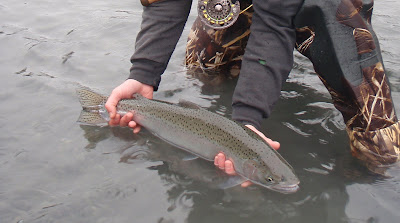 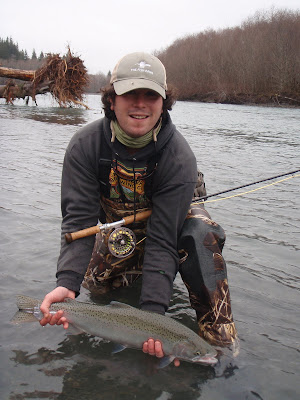 After that fish, I went 2 for 2 from the boat indicator fishing, my coworker went 4 for 6 from the boat and after lunch the guide fished for ten minutes with his centerpin rig and went 1 for 1. I guess that method works. 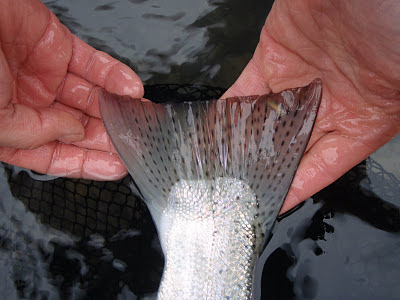 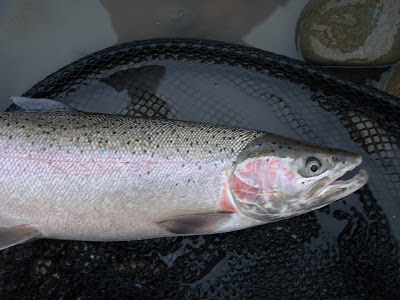 We gave the hatchery brats the rock shampoo, so steelhead's on the menu tomorrow! 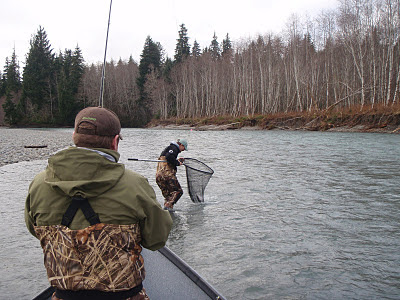 There's steele in those waters!
Posted by Jesse Lance Robbins at 12:29 AM

Email ThisBlogThis!Share to TwitterShare to FacebookShare to Pinterest
Labels: Camo, On The Swing, RandD, Steele, Washington

Camo waders and fresh steele on the stringer! Are you sure you weren't fishing below the bridge in Altmar? Well done buddy. Some day you will have to teach me the way of the spey...

Beautiful locale and even more beautiful fish. There are steele in those water Port, there are, you have proved it. Well done.

Those camo waders are the most fashionyredneck thing ever=dope. Spey works huh?