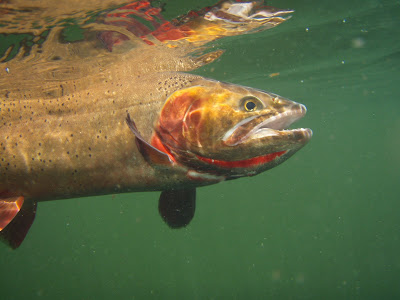 They say when a marlin loses its bill, it goes to fish heaven

This spot is about an hour and a half drive out of town on dirt roads. The last couple miles is, more or less, a jeep trail through dusty cow pastures. Right after this fish came to net the rain started and the fish stopped eating. It rained as hard as rain rains for about 40 minutes and the jeep trail immediately developed a 3 inch thick layer of mud sludge on top. Vehicles driving over the sagebrush hills made it out while ones that stayed on the road got bogged down in ruts throwing mud geysers into the air. Half the vehicles that were at the lake came out while the rest were scattered about, left for future retrieval. It was a pretty hilarious sight. The trusty '01 Forester with suspension lift, front and rear skid plating, sans swaybars, and oversize AT tires was one of the ones that made it out - guess I won't hear anymore shit from people about making those modifications to a Subaru....or maybe I will.
Posted by Morrell at 12:11 PM

What kind of setup are you using to get that shot? I want one

Just a waterproof point and shoot. Olympus 770S&W. The thing is bombproof. Alot simpler than dealing with a waterproof housing too. Only drawback is that the video quality is seriously lacking. If you are looking for something with good video, look elsewhere