Last month I returned to to surf, a pastime that I don’t often get to enjoy living in . Because I get my fair share of fishing in , the trip didn’t have much of a fishing component but I did want to get back to a river I had been to in the Lakes District town of . I had been there 2 years before and had a fun float with Mario of Mario’s fishing zone http://flyfishingpucon.com/.

In 2009, half a dozen or so pan sized bows and browns were landed on a float trip through the bamboo forests in the mountains above Pucon. Hammering the overhanging vegetation and undercut banks at river’s edge produced small fish though pictures in Mario’s shop proved the existence of monsters.

Last month on the same river, we were greeted by fishing déjà vu. Half a dozen pan sized bows and browns came to net again despite relentless pounding of the fishiest looking banks, snags, pockets, and impossibly deep (35’+) pools with T14 shooting head – this stuff sinks at almost a foot per second- it does not fuck around. After the all day float, which runs about 70 bucks a person, depending on the exchange rate, we were super stoked on the scenery and happy to hook into some fish. In a last ditch effort however, our guide drifted a couple hundred feet past the takeout to one last bottomless trench and we proceeded to dredge it. In the dying light, one of my last offerings into the depths of the pool was straight up abused. I could tell immediately that this was the largest fish I had ever hooked with a 5 weight, or with a clicker reel for that matter, but somehow, miraculously, the coho came to net after abusing me for nearly 30 minutes. A large part of the rest of the trip was spent chasing fish. It only takes one bruiser like this to get your head screwed on straight and priorities back in line. 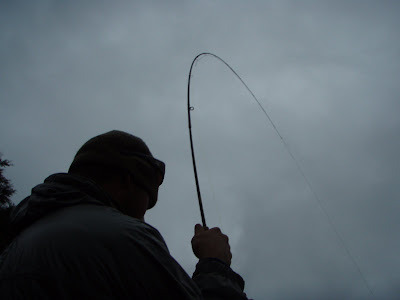 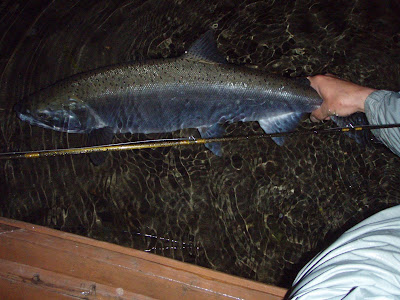 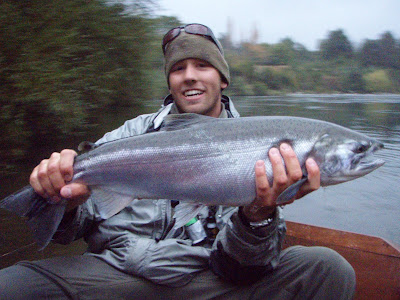 Email ThisBlogThis!Share to TwitterShare to FacebookShare to Pinterest
Labels: Chile, On the road, Salmon, taking names.

Dude, priorities...a fish like that in Chile....there are waves in every ocean in the world. A big HELL YEAH to this post brother; well done!

A coho in Chile. I'll be damned. Great fish!

WICKED. on a 5 weight with a click?! dude, you'll remember that one for the rest of your days for sure. awesome fish, well done my man. i hope our paths cross out west soon. good on ya

yea that was one incredible animal. I think I'm on the Salmon train for good with all you Pulaski junkies.