I had a 3 day work conference in Anchorage, AK last week and was able to tag on 3 additional days to go 'play.' I left the conference a few hours early and boarded a plane to Yakutat, AK, following a comment from a fishing buddy that I might be timing the run of Steelhead on the Situk River just right. I landed in the Podunk town of a 1,000 people or so, was handed a pickup truck and headed out to a reserved cabin. Did one day offshore--figuring it would be a good change of pace, a way to meet some people in camp, and to come home with some meat for the freezer. One guy landed a halibut around 100lbs, we pulled in a couple smaller ones, some lingcod (out of season) and I ended up catching this yelloweye rockfish which I guess is pretty rare. Anyway, we split it up and I came home with a box full of goodies. 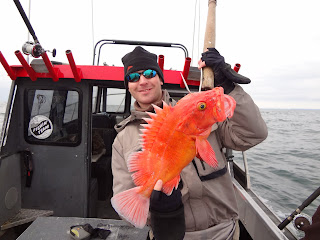 The next day I split a drift boat with another guy and headed out with a local guide. There were a fair number of people fishing the river and everyone seemed to be dead-drifting beads and more beads. Given I had tied a bunch of fur and other patterns in the weeks prior and our guide wasn't providing much direction, I pulled out a big ol leach and started swingin. Third cast in the first hole we stopped at produced this monster. He was estimated to be around 35in+ and about 20lbs. Other guys were certainly catching more fish with beads, but I won't exchange numbers for the memory of watching that fish swim over to eat my a leach on the swing. 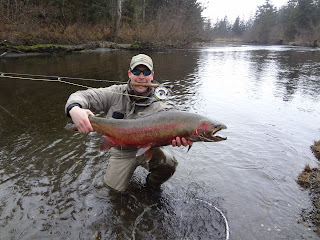 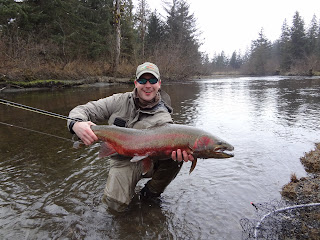 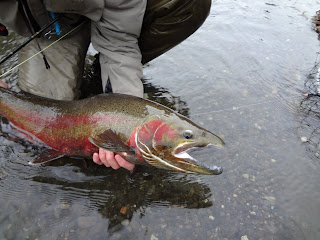 Ended up landing one more that day and had 2 more spit. Second day I hooked and fought one even bigger, but ended up losing that one-way battle as he broke me off in some overhanging brush. All in all, and hell of a time and a fish I won't forget anytime soon.

Thanks Wilkie and Robbins for inviting me on this blog. Looking forward to meeting and fishing with some of you guys in the near future. Newer to town and living around Portland.

Big Bill, shit man 20lbs, well done. That thing has some insane color. You can add organizational tags onto your post by going back into edit mode and typing in shit like "Alaska" and "Steelhead" etc. You'll see the bar down below the post where you can type it in. Glad to have you aboard and looking forward to hitting the water with you soon.

dayumn. Nice Work Will. In the words of Wilkie, that must have been comparable to one hell of a "quality roll in the sheets"... with a very large woman.

Also, if Im not mistaken, that may be one the largest salmonids yet on Solid Hookups

well played sir. you are a fine angler.