Confessions of a steelhead virgin....

It is 1:40pm on Friday, my boss has let me out of work early and I am sitting in my car as it warms. There is 12" of fresh, wet snow on the ground and more falling with each passing minute. My cell phone beeps with a text message from Jesse, a poetic battle cry for fools.... it reads, "Steele await the strong hearted."
I am starting to feel like a fool, a 10 hour drive from Maine to North Western New York to fish for a fish that does not eat during the winter, a fish famously called the "fish of a thousand casts."
But my Yaris is fueled up, bags are packed and a new 9' 9wt fly rod, thanks to my friend Boz, sits in its tube in the hatch. The plan is to drive down the east coast picking up migrant fly fishing fools along the way.

First stop Emery St to find the elusive Jesse Lance Robbins, then on to Andover to pick up Dr. Keith Lane ESQ. I had not seen Jesse for close to 10 years, we went to high school together and played some basketball but since then I had only read about him and marveld at his photos.

There is a section of I95 from Bangor to Newport, ME that is only 21 miles long but contained 12 cars off the road, some in worst shape than others. I bomb southward thinking of fish and crowds.

You see, you hear that the Salmon  River is crowded, that is all I heard when I told people I was going there.
"Oh, there will be tons of guys around", they said. Normally if I show up at a spot to fish in Maine and there is one other car there I think to myself, " oh man, some idiot has ruined my Saturday." I usually hope it is a stoner or some kids making out in the backseat of their parent's car and not someone else fly fishing that same pool of water. So I was in for a suprise.... in Pulaski. 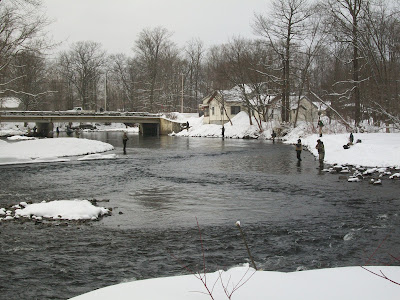 This is a photo of the "Bridge Pool" that I took on Saturday, to those of you veterans, it is not that busy, but to me it was a fishing in a Walmart checkout line.
So cut to the chase, did we drive all that way and catch some fish ? Well yes we did, there were guys fishing the Lower Fly with us who "caught" 60 or 70 more. I noticed that most of the fish that they caught had hooks sticking out of their fins or under bellies, but hey fishing is fishing I guess. Keith and Jesse managed to get the Steele to eat their flys, which brought amazement to the JIG fishers around us. My fish tried to take my fly but missed a little bit. It was small I know, I know, but it was my frist steele , look below for some cockers. 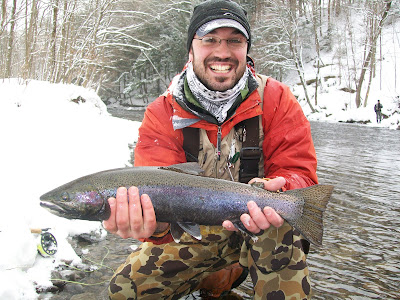 Each night, at our posh Mahoney Camp's cabin, we would talk about plans or options for flys. I fished a lot of black stones and egg patters but the real secret fly was the Robbins Egg Sucking San Juan Worm. It will soon be stocked at Fat Nancies and will be the guides choice for the November run. 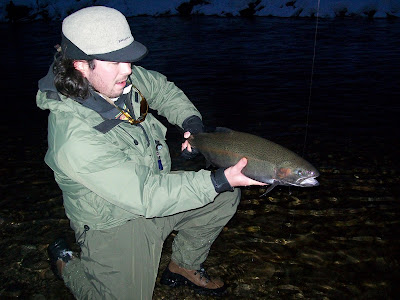 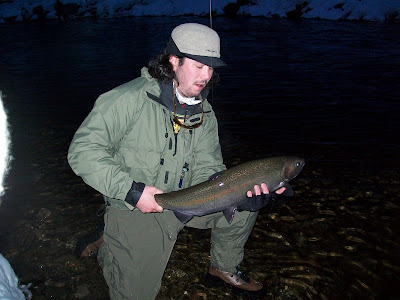 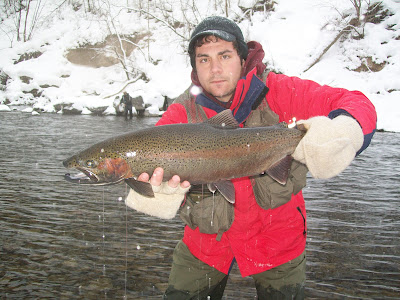 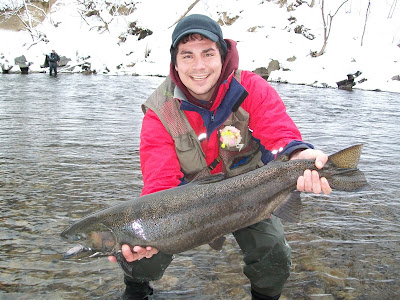 Steele..... I am excited for some more in the fall. The moral of this story is, if  your friend throws out some hairbrained idea to drive 1,100 miles in the snow, through the night to fish on a river so crowded you need the patience of a Zen master, to try to catch fish that don't eat so in turn you have to stand for 11 hours in the cold river hucking lead to the same 15' of water while morons next to you JIG fish and then hold them up by the gills for 10 minutes while they dig for a camera in their new cabella's jacket to show their buddies back in New Jersey, then you should go. It was awesome. 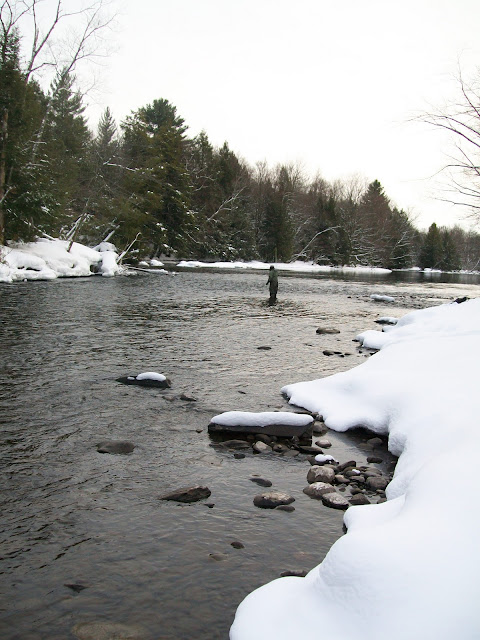 well said, jasper. i just returned home from a semi-final rec league loss and this story eased my spirits. it was truly a pleasure joining you on the road and on the water. i hope to do both again soon.

Jasper, I look forwad to meeting you my man. After a spirited post like that I can only hope it is on the water of the SR

Thanks JLR.... Wilkie it will be a pleasure... I have a drift boat I just built this winter so come on up lets do some fishing

Gret read and pics Jasper. Especially the last paragraph, I was laughing out loud. Sounds like it was definitely worth fighting off the masses.

How did your boat build go? I just ordered some plans from Paul Butler and will likely start construction soon myself.

I feel like Barry Bonds pees in the Salmon River. The fish are retardedly massive.

Morrell, looks like some nice plans, if you are ever in central maine, swing on by for a beer and you can check out the drifter.

Hahaha. Caleb, well said. Jasper, you are the man. I have never met anyone that did the AT, drove a motorcycle across the north pacific states, and canoed the entirety of the mississippi from Minnesota to the gulf of Mexico. You are legend, and steele are the stuff that legends are made of.

Get ready for the canyons my man. the summer is nearly here.