"That was the best NJ I've ever had."

After six straight days of guiding, Saturday had come and it was the Guides' day off. Friday night found us at the bar with no alarms set in the morning, so we weren't the first ones on the river Saturday morning, but I'll be damned if we weren't the most excited. After a quick breakfast, my fellow guide Boone and I fished the ranch's section of the Rio Grande, landing a good number of browns and a few rainbows, mostly on stonefly nymphs or smaller, olive nymphs. It was a good day already. Finished with the Rio for the day, we elected to continue fishing on The Creek - Goose Creek.

Goose Creek is the ranch's money water and it runs literally thirty feet from where I rest my head. Station Road follows the creek from its confluence with the Rio nearly 7 miles upstream, with station markers every half mile or so. It's a gorgeous road and allows for vehicle-viewing of the creek and its terrain. We elected to fish a stretch we hadn't seen in a while, station 10. Around station 9, the creek heads out of a large meadow and into the trees, with plenty of drop-offs, rock walls and run to keep any angler busy.

It turned out to be a frustrating afternoon on the creek for myself. I lost a few rigs in the trees and had to re-rig several times. I'm sure Wilkie or Pete can attest to my attitude after breaking off a double nymph rig. But spirits were still high and the day was still fairly young, so we continued on. I put a couple pretty, but smaller browns in the net and Boone landed a couple as well.

It was getting to that time in the late afternoon/early evening where beers sound pretty damn good and as we had already stung some fish that day, we could easily leave with no regrets. Keep fishing or not - it seems this crossroad often finds an angler. In my experience, either road leads to good and fine things, but more fishing always holds the potential for more fish, so we kept moving up.

Finally we agreed to fish just a few more holes and we spotted a good looking run upstream. The light was just right and as we approached I spotted a fish. As I slowly neared, it appeared to be a good sized fish. It was Boone's turn on the stick, so we discussed the drift and watched the fish for a minute then he eased into position. A roll cast later and the fish remained. We watched the fish as he false casted and laid one down right on target.

The flies and indicator floated and then stopped. "There he is!" I said as Boone set the hook and the water erupted. Immediately the fish went upstream and then headed across, heading right for a blown down tree on the other side of the creek. The reel screamed. The fish went up and around the tree as Boone raced upstream, then across and down, following the fish, hoping to keep it out of the massive tree whose branches provided countless opportunities to break a fine tippet.

Into the branches the fish went. I had crossed the stream myself by this time, net in hand. The indicator stopped moving and then moved upstream and finally out of the tree. Then the fish went back upstream, around the tree and down again, Boone in tow behind. Straight downstream it went from there and the reel screamed again. I plowed through the tree for the second time, downstream of Boone, but the fish passed me and continued down. We had navigated the first obstacle and laughed in surprise as the line stayed tight.

Across the fish went. Then across again. I got downstream of the fish as it turned upstream and headed for the undercut bank below from where we casted from. Into the bank it went. Expletives were exchanged and hurried discussion of what to do next. "Get it out of there!" I yelled, water at my waste. Boone reeled down and we had the fish leadered again, full side pressure. The indicator stopped moving and I slowly moved to where I could put the leader between open fingers. I followed the leader down, felt the tippet and kept going. "Careful! it's 5X!" Boone shouted. I passed the first nymph and knew the fish and the dropper were close. Then I felt the tail. One shot would be all I would get to tail this fish and it slipped through my hands, out from the bank and downstream.

The fish was still close so I picked up the net again and made a swipe. Tail and a third of the fish went in the net and then out. And downstream it went again and the reel yelled yet again. The memory of a blown netting that would've been Wilkie's first steelhead came into my head as we chased downstream and the line lengthened.

We exchanged yells of where to move the fish, but the fish's downstream course would not changed again. More line came off the reel and the fish continued down. We exchanged an 'Oh fuck' look and followed. My walk turned into a run as Boone navigated rocks, holes and trees from the bank. More line came off the reel and the leader was long out of sight. I could only see fly line in the distance and more snags, blow downs and the like as I jogged downstream, losing sight of Boone and the fish.

I could see his rod tip high and a slight bend in the rod still but things were not looking good. Again, my blown netting came into my head as the realization that this fish was probably not going to get into the net took over both of our thoughts. Still we followed.

I ran as fast as I could, hoping to find that indicator and the leading and finally caught up to it. And then, through the trees I saw the fish. Head downstream, tired and right below the surface, the fish wasn't swimming, but going as fast as the main current. I then realized what I had to do. I ran hard one more time and the fish was even with me. A few more strides and I plunged into the river, sticking the net right in front of the tired fish. And in it went.

I had him in the net and headed for the bank. When I got there, I let out a loud yell, followed by a few more. A few moments later and Boone came into view and I saw his face as he realized I had netted the fish. And what a fish it was. 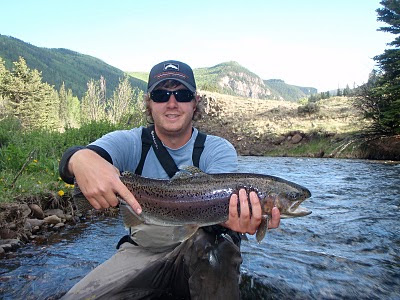 A few pictures later and the fish was gone. Fist bumps, laughs, yells and Holy Shits later, Boone looked at me and said, "That was the best NJ I've ever had!"

As summer fishing finds us all, wherever we are, I hope you all find tight lines, bold beers and good NJs - Net Jobs.
Posted by Jesse Lance Robbins at 10:15 PM

Email ThisBlogThis!Share to TwitterShare to FacebookShare to Pinterest
Labels: Colorado, Fishing, On The Ranch, Rainbow Trout

Dude, wow, fantastic fish. That thing is approaching Steele status. I would have liked to have witness this epic battle.

well written Jess, we all need a couple good NJs now and then.

I would have liked to have "witnessed" this. Forgive my typing, don't want you all thinking my Bates education was a total waste...ha