Fishing the Fishes with Pete

There is a place on Cape Cod where the water runs deep and fast. It is a mysterious place to me, perhaps because I have visited it only three times, two of which have been under the cover of night. To say the least, it is a little different environment from that which I usually find myself when fishing.

The amount of water that moves through this place is staggering, often scary. I usually feel somewhat uncomfortable when moving around, waist-deep in its currents. Pete can create a visual map of the place and while I can understand his descriptions, using this visual map to fishing advantage is something I am far from achieving. The objectives of each cast is determined by your place in the area and the time of each tide. When Pete puts me in a spot, explains to me what's directly in front of me, I can then attempt to achieve the casts I want, but whether or not I'm actually achieving them is something I'm still not certain of. It's a very difficult place to fish.

Sometimes just being instructed on how to fish a particular place will do. But I find that observing someone fishing that place is equally, if not more, beneficial to fishing it. For this reason, along with a touch of frustration, fatigue and a desire to converse, I would sit down behind or next to Pete and watch him fish. Pete has taken to the spinning rod. The spinning rod is something that feels foreign in my hands and as such, watching Pete use one is an education unto itself. I have spoken to Pete countless times over the past few summers and falls as to how our fishing has been. Usually these conversations deal with statistics (number of fish, size of fish, etc.) or a particularly good fishing story ("Are there any fish over here?" "Well that guy just got a 50 pounder..."). Much less often do our conversations turn towards actual technique, the flies/lures we've been using or the types of presentations we've been offering. Fishing with Pete Monday night, our conversations were probably 75% the latter.

At some point in the night, I was taking a break from my own fishing and watching Pete. I was happily bundled in waders and my jacket, resting on a very comfortable piece of rock beach, with a slanted boulder behind me, to rest my back on and recline. I think I even had my hands behind my head as I watched Pete fish 15 feet in front of me.

I had been watching Pete for 10 minutes or so when I watched him make a fairly short cast. He worked the lure into a drift, alternating forward and back reels. Then I saw a quick change in body position and his rod was bent over, his reel screaming. I had never witnessed quite a strike and solid hookup as this, right in front of my eyes. I immediately began smiling and continued to sit there in my reclined position as the battle began, perfectly content to watch the fight in my comfortable seat.

Soon Pete was off to the races down the beach and I was soon behind. War cries filled the windy night air. We got our first glimpses of the fish a few minutes later and a few minutes after that, we beached the beast, Pete's third and final fish of the evening, also the largest. I released the fish back into the depths and we laughed together at the thought that I was in the perfect spectator's seat for what had just transpired. 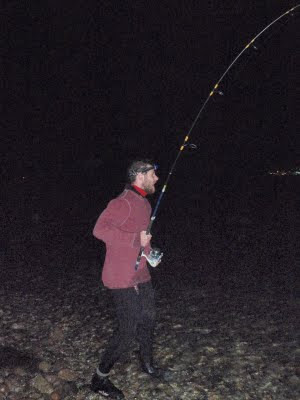 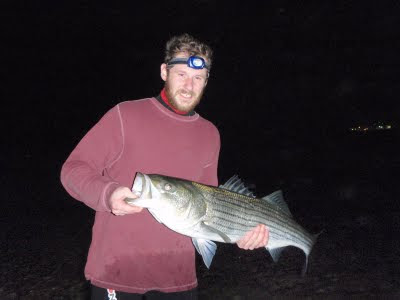 Someday I will catch a fish at this place. Pete will be there, and we will laugh. Thanks Pete.
Posted by Jesse Lance Robbins at 2:07 PM

someday jesse...someday...hooked the bottom two nights ago...then it moved a bit and gave two powerful headshakes and was gone...