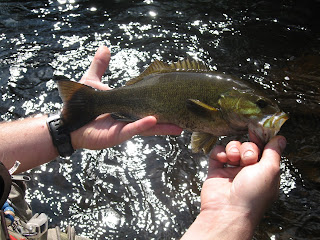 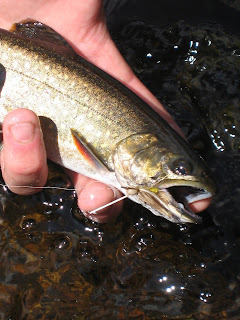 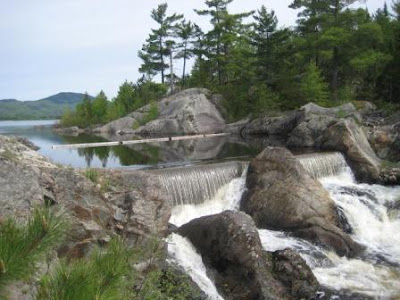 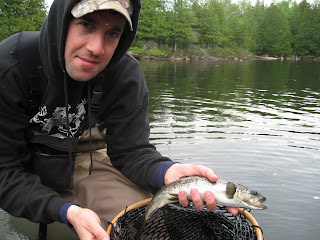 I wouldn't call myself a fisherman. Unless I'm drunk and I think a woman will be impressed.
(You'd be surprised how little that works in the city.)
Look at that. I'm holding that . . . salmon? . . . like I'm trying to jerk it off.
I'm more of a gadabout. Which means I like to feel like a big man by using big words, and more literally, I like to try anything I think'll be fun.
(And, by the way, gadabout is a great name for a fly. If it's not already taken, it's now trademarked by me.)
I've been a proud member of the BFC since 2002, when I think my official title was Vice President of Onshore Operations. Which meant I was in charge of getting the beer, but being completely unreliable, I was second in command for such a menial task.
My fishing experiences have always been beverage oriented. My uncle gave me my first taste of beer when were fishing off the Padanaram Bridge in Dartmouth, Mass. I don't remember what kind of fish we were tossing in the bucket, but I remember the beer. Miller Lite. The old school white can with the calligraphy script. As you can see, my priorities aren't traditional, but they're in order.
This is a fisherman: 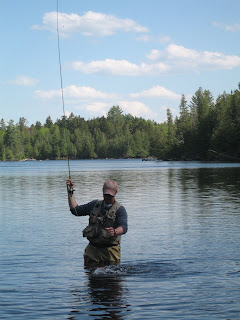 Look at that. The bastard even has a fish on.
(Editor's note: in my amazement, and lack of coordination, I dropped my camera in the river right after this photo.)
Say what you will about the man, and in private, we shall, but Wilkie knows his angling. And on a long weekend up in Jackman, he tried to impart some knowledge which sloughed off me like water off a duck's back—another animal Wilkie has trained me to kill and I have failed to execute.
I'm more of a word guy, and that's what tends to stick.
As a pseudo-fisherman, I know I shouldn't tell people the locations of our honey holes.
But I just really like the term honey hole, so I'll look for any excuse to divulge.
I like how you don't catch fish, you "grease" em.
I like to call my coffee brandy and milks "sombreros," because I'm into brevity, and because of the ridiculous contrast between vernacular and actual location.
I like how there's a clear change in timbre, register and accent whenever Wilkie comes across a fellow Mainer, and how he can understand an old Norwegian faintly mumbling something about sucker fish 40 yards across the lake, and I'm stuck whispering "Dude, what the hell is he saying?"
I guess, fishing for me is like college. I don't remember a moment of my classes sophomore year, but I remember giving Wilkie his first dip.
Talk about pale and sweaty. The man looked like one of those waxy Jesuses you see crucified in old Italian churches.
Now the man is shoving meaty finger-fulls of Grizzly in his maw because Skoal just ain't providing enough kick.
And I don't remember the name of the dry fly, but I remember catching my first fish with one.
Couldn't tell you if it was brookie 37 or 73 that we browned up in the skillet, but I remember it went damn well with the herbs from Wilkie's garden. (Sally.)
I can't really tell you any of the details you might be looking for, because I love fishing, but it's never really been about the fish.
So I'm down for next time.
I'll bring the booze. We'll make a fire. You'll tell me about your last trip to Pulaski, NY and the salmon you greased.
I'll tell you about the time I ventured to the same Salmon River and spent the day playing in the woods with an old shopping cart.
I am the proud Vice President of Onshore Operations, and I'm signing off for some R&D, because like the Presidential Seal, the BFC brings two kinds of thunder.
The eagle with the arrows and the olive branch.
The fish with the reel and the pint glass.
I just happen to be better at one than other.
Honey holes to be revealed to those with privileges. 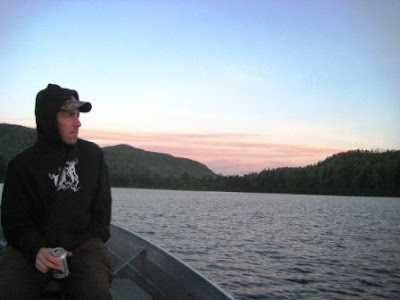 Dude, epic post. Your first ever fish on the fly came on a beadhead green Crystal Bugger.....your first ever dy fly fish came on a size 14 Adams. We'll have to give you something else to write about in the near future.

It is posts like this that make this the finest fishing blog in the entire world.

The BFC is vast. Not only will we take down fish, the bar and women, but we will transcribe our heroics in the finest literary concoctions of words known to man.