I loaded the motorcycle with my fly rods and gear the night before in eager anticipation of a day spent on the Dead River. This season I've made a concerted effort to take the bike on as many trips as I can in an attempt to save on gas. Pending weather, and dirt roads that do not allow motorcycles, its worked out rather famously; who can argue with 55 mpg?
I arrived at the river early, the sun was out and a few caddis were already coming off. By the time I had suited up, strung my rod, and stepped in the water, a full on caddis hatch was smoking off the water. 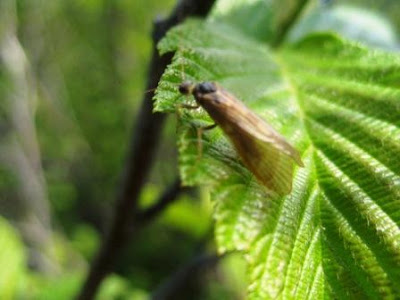 This morning I had stopped at a particular access point on the river where I've never really caught anything before. A large eddy here usually attracts rednecks with giant Rapalas and excessive spinning outfits. This morning these people were nowhere to be seen so I figured it was worth a shot. After a few casts I hooked into and lost a quality fish on a streamer, and then promptly tied into another sizeable fish that fought like hell. Unforunately it turned out to be a 24" pickerel. I had never seen a pickerel come out of this river, and figured it was par for the course given my previous lack of luck at this particular stretch of water.
No fish were rising so I switched up to a nymph rig; sz. 16 beadhead hares ear followed by a sz. 20 copper john. If there is one thing I can say about Steelhead tactics, its that they have seriously improved my nymphing abilities here in Maine. A half dozen casts and I was into them. 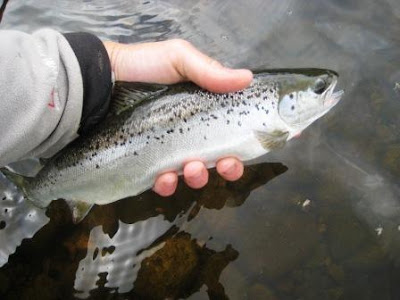 Several respectable Salmon up to 18" came to net. Not bad I thought, given the way the morning had started, and given that I never had truely given any respect to this spot. Only thing that could make this better would be to have a few fish rising......wish granted.

I hastily tied on a tent wing caddis, smothered the distant rises, and was into even more Salmon. Again, four or five more fish came to net the largest around 18" all on various caddis imitations. 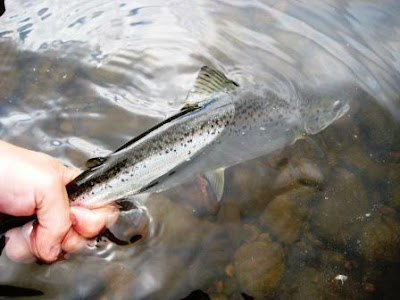 The caddis continued to hatch, and fish became more fickle as the day heated up and the real thing became much more impressive than my fly presentations. I decided a move downstream was in order. I would fish a 100 yard deep gut on river left that led down to a set of rapids. Fishing the cut proved uneventful on both nymphs and dries as I worked my way downstream. Given the finiky nature of the fish at the last pool I began to assume that it was that time of day where one either gets lucky or finds a school of fish with a bad attitude that were willing to strike. As I moved below the rapids I found a ton of fish rising and feeding voraciously. I selected a large rock on which to stand well out into the current. Each cast was met with at least a fiesty tail slap or an aggressive strike.

After losing a couple of fish in the swift current, I started getting into them hard. I landed a handfull of really nice 16" chubby brookies, followed by at least a half dozen brookies and salmon in the 12" range. 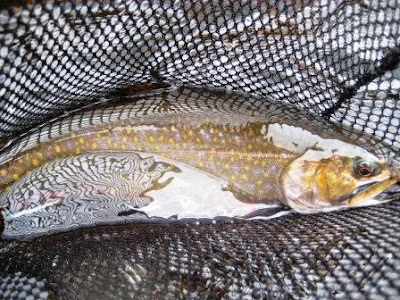 It was nice to see some fresh tails, pectoral fins, and gill plates on these fish, a sure sign that they hadn't been stocked in the past year or so. These fish were full of fight, and I can't emphasize how fat and healthy they were compared to other brookies their length. 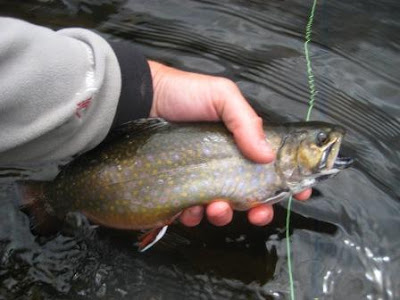 It was getting on toward 3 p.m, the caddis were still exploding, and I figured I would move back upstream to the original hole, fish for an hour or so, and then hop on the bike for the 60 mile ride home. 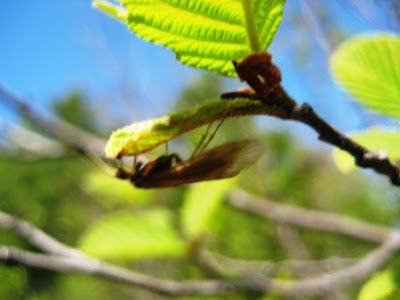 After 20 minutes of fishing with limited luck, I noticed a GMC truck pull up along the river's edge behind me. Undeterred, I fished on. As I reeled my line in to relinquish my position to the intruders I heard a yell, "Wilkie!", "Dude, I can't believe you're still here". The words of BFC emeritus T. Sawyer Fahy and his '05 Bates brother of the long Rod, Mr. Frost. I smiled, as I had phoned Sawyer in the wee hours of the morning hoping to get him on the water that day, but as a result of prior obligations he was unable to join me. We exchanged handshakes as the two rigged their rods and I told them of my epic day alone on the river. 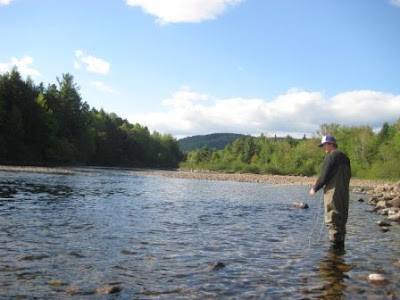 I sat on a boulder content to watch these two men try their luck in the pool that had been so productive in the early morning. Frost was explaining this cripple fly that he loves to tie, while I exchanged thoughts with him regarding my recent quitting of dip and my constant cravings. While discussing cripple flies and dip, Frost pulls out a pack of swisher sweets, and sparks one up. Intrigued, I asked him for one. Frost then flipped his fly out into the water and begins walking backwards to my position on the bank to offer me a cigar. Just as we made the exchange he bellowed, "I've got one on!". The hookup had been made while the cripple skipped across the surface as Dan had walked back to me to hand me the cigar....simply rediculous.....and what a Salmon! 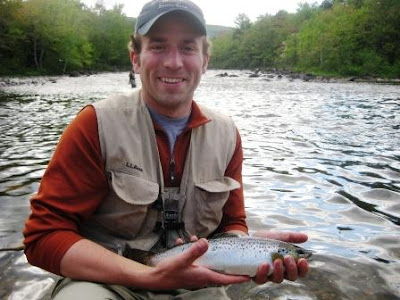 After a fantastic day on the water by myself, I couldn't have envisioned a better end to the trip than to be surprised by fellow BFC alums and to watch them connect with a beauty of a fish.
I loaded the bike, said my goodbyes, and left the river satisfied.
Posted by Andrew Wilkie at 8:48 AM

great story mister. nothing like coincidentally running into someone you know on the water.

sounds like an epic hatch. wish i could've been there as well. great bug pics.

Up on Cripple Creek she sends me...