here we got some big ones and small ones and neither small nor large ones.

this winter at the marlboro fly fishing show i saw a presentation on baitfish by ken abrames. the slides he was showing were of various baitfish under different light settings. it was amazing to watch the different colors which came out of the same fish but in different environments. yet one thing remained nearly constant in most of the pictures. each fish had a discernable black line running laterally through the middle of its body. one thing he mentioned was that when he puts peacock herl over the top of his flies he does so to give his little fish the impression of having this line. he believes that the fact that the line is there will make a fish more inclined to sample your fly. ken seems not to see a problem in the fact that his dark lines are placed on the top of his fly rather than in the middle, as it phyiscally appears in a fish. but on the second fly from the bottom i remembered these pictures of baits i had seen and decided to put their dark line stemming from the tail rather than wing of the fly.

for anyone who has ken's flatwing bible "a perfect fish", the RLS dusky dawn and easterly are tied with thier herl trapped inside of their wing. i like it! 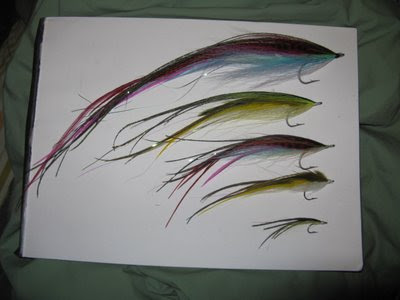 Email ThisBlogThis!Share to TwitterShare to FacebookShare to Pinterest
Labels: Flies

awesome flies petey. it will be interesting to note the size of the fish that each these different sized flies.

thanks jesse! i have caught some tiny bass on some big flies...and some big bass on small ones!

sometimes i look at the little bass with the huge fly somehow stuffed in its mouth and think that this little thing had no business trying to mow something well over half its size...but then, it did after all try to eat this thing...so...what business do i have assuming the business of something else...

What beast could resist the motion of one of these flies in the water?? Largest Salmon on the fly (25"+) I've ever seen came with Jesse on a size 18-20 blue winged olive, yet I've seen 10" salmon take a monster size 4 streamer in the fall. Two days until open water here in Maine...

wilkie, we'll give you a nice close up look at their motion in the water and you can decide for yourself!

ha, well said wik. we should maybe get a pot going for the first person to enter the 20-20 club this season.

please tell an ignorant fisher of the salt what the 20-20 club is.

well that makes a good deal of sense...i feel pretty dumb! although i can't remember the last time i talked about a fly in terms of its hook size...maybe i should start calling them fish...