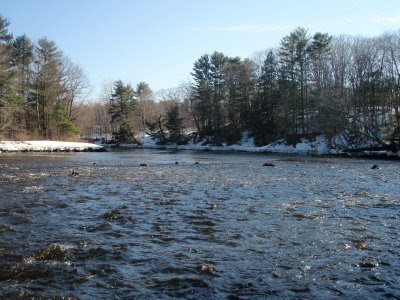 March in Maine is brutal. The fishing season is so close yet so far away. The snowstorms, slush storms, below freezing weather and wind reminds us it is so. Nonetheless, those sunny days when temps are in the 40s are a welcome tease.

I awoke on Sunday in a familiar state. However, spirits were high as I knew my day would be spent in the water. A jaunt south to Eldredge Brother's Fly Shop in Cape Neddick for some new gear and then a hop north to the Mousam found me in the familiar waters with the sun sitting amidst a blue sky.

That morning I had gone about the task of putting all the necessary gear in my car for the first time since removing it last November. I triple checked my packing; rod, reel, vest, waders, boots, etc. to ensure I would not be in a pickle when I finally reached Roger's Pond in Kennebunk. I was not the only one with the notion that day and I noticed a few anglers here and there. No one confirmed any fish, but it was clear all were glad to be fishing.

I have had enough success on the Mousam and have also been skunked enough times to not expect fish, but to know that they're there and where they have been in times past. This can sometimes be a handicap, as it is natural to fish spots where fish have held before, but it is also necessary and fun to fish spots you haven't before. When you can find fish in these spots, it is especially rewarding.

As I walked up, down and across the river, I noted fishy spots and fished them. 'A bugger might work there,' I would think and then try it. 'A couple streamers swung through there might be the ticket. Oooh, let's nymph this spot.'

Familiar rocks were welcome sights as I trudged up-river. The river was high, yet very wadeable and I was happy to be right in the middle of it. Recognizing spots that produced fish in the past made me smile and I fished them.

'Would a fish hold there? Only one way to find out.'

'That's a funny looking tree. That looks like a seam for steele there, ha!'

'Those thorns are still there, huh? Excuse me...'

My casts were a little rusty to begin but it didn't take long before they were true, my drifts looking decent and my swings swinging nicely. One nice thing about the Mousam is that it's easy to leave because it is so close and so easy to return to. My walks downstream back to the car on the Mousam are oftentimes filled with as much or more reflection and contemplation as the actual fishing is. You can see other tracks and wonder how other anglers fished certain holes and sometimes wonder why the hell someone would walk over there.

This day I found myself trying to recollect my thoughts while in the river. Why did I nymph there and swing there? What was I thinking when I went there and not there? Was I talking to myself? Was I thinking at all?

As I neared the car the thought came to me that perhaps I was not speaking to myself but conversing with someone or something else; another spirit. It did not take long before I knew who it was. 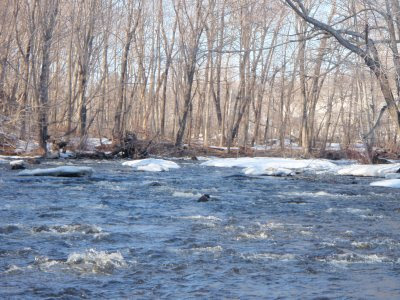