I managed to round up a few more pictures and details about that Togue caught last week on Moosehead Lake in Greenville. 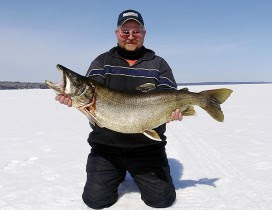 The fish was officially 29.67 lbs. and 41". The guy (a native of Rockwood, ME) fished an additional 3.5 hours before bringing the fish to an official scale in Rockwood at the UPS store. The fish maxed the scale out at 30lbs. showing an error on the screen. 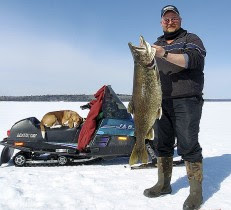 He then drove 15 miles south to Greenville where it was weighed at the Indian Hill Trading post (some of you are undoubtedly familiar with this place) and again it maxed their official scale at 30lbs. He saddled up and drove even farther south to another official scale at a meat place in Dover-Foxcroft where, 5.5 hours after being caught, it weighed in at 29.67lbs. Apparently there has been speculation that after nearly 6 hours, the fish had lost enough weight to actually make it a state record, which was 31.5 lbs. caught in 1958 out of Beech Hill Pond. The Biologist believes that indeed it initially weighed over 30lbs. but they doubt it lost enough to consider it an actual state record. It was the largest Togue ever caught out of Moosehead Lake, a record held since 1961 and the biologists estimate it's age to be 40+ yrs. The dude's name was Maynard......well done old boy!
Posted by Andrew Wilkie at 5:33 PM

any details on how long it took him to bring it in?

what did it eat? and i haven't been in a state of mind to remember such things while out on the ice, but what pound test leader was used?