Updates from the Road

12/22 - 1/10
A few weeks after graduation, half the class of 2008.5ers set out for Wyoming to visit family and friends in search for deep snow and Yellowstone Cuthroat. Though there was little fishing on the trip due to subzero temps and record breaking snowfall for the majority of the time, We did pick up a bunch of one-day licenses and did some exploring around the Snake and the tributaries open to fishing this time of year. The clerks at Will Dornan´s Snake River Angler and Orvis claimed that we were wasting time chasing cuthroat when temps dropped below 20, I was convinced that their advice was just a product of the insanely good summer and early fall fishery spoiling any motivation to get out in mid-winter.

We were wrong. Somewhere in the low twenties seemed to be the magic number for cutties to start feeding and although we were greeted with a few bumps over 4 days of fishing on the warmest days of the trip, only one was brought to net. This particular day had the first window of above freezing temps we saw the whole time and it was a nice change of pace to cast freely without knocking the ice out of everything every couple casts. Fishing was deep. The tributary river itself varied from ankle to waist deep with occasional freakishly deep pools. Only the deepest most protected nooks held fish in undercut banks and were only accessible behind 4 to 7 split shot and drifts of up to a minute to get to the bottom of these pools in the swift current. White wooly buggers, sex dungeons, double bunnies, and other large attractors were suggested by some local knowledge and behind these we dropped zebra midges and other small silver and black nymphs. The fly that brought a cutty to net and one that looked particularly slick was a copper john like pattern with zebra midge black and silver up the body. Another local standout that produced bumps and amazement that such a fly existed was “The Fly Formerly Known as Prince” – a close relative to the prince nymph with a couple over-the-top flamboyant alterations. 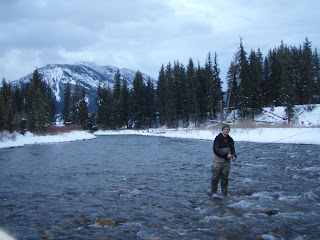 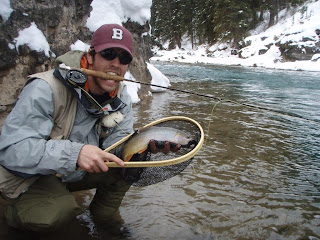 On Christmas Eve 2008, Jackson Hole received an overnight snowfall record of around 30 inches on top of a good 2 feet from the previous week. The half dozen Batesies residing in Jackson led the charge to some amazing stashes on the mountain and what commenced was truly unfuckingbelievable.

When it came time to head back to Maine, no one was stoked at the prospect of being holed up in the car for the next three days. By Eastern Ohio the crew was completely stir crazy and the decision was made to make a small offshoot from I-90 in Syracuse. The next morning, an hour before dawn, temps were in the single digits. It was a Saturday and the river was packed by dawn. Nevertheless, I got a pretty good stretch of water, fished for a few hours, hooked into the biggest trout I have ever even dreamed of, and promptly snapped off the tipet when a completely frozen reel and guides refused to give the beast any line. When smoke comes off the water, wool glove clad hands are too cold to tie knots and most people on the river are wearing facemasks, I consider it high time to switch gears and go ice fishing.
1/17 – present
A few months ago, I applied for a grant to attend a land conservation finance forum in Southern Chile. The conference itself was in the city of Valdivia and consisted of 3 days of presentations from groups like The Nature Conservancy, Lyme Timber, Trout Unlimited and a bunch of other Latin American and American organizations. All in all, it was an awesome couple of days, met some great people and made some connections that, with any luck, could lead to something in that field down the line. Because I had no second semester obligations and was already in South America, I opted to extend the stay and meet up with 3 of my boys from Bates who had been in Chile for a few months by that point. As of right now, its looking like we might be here a little longer as living expenses are next to nothing, I have no job in the States, English teachers are in high demand in the areas of Viña del Mar and Valparaiso, the surfing here is off the chain on a regular basis, and best of all, some of the finest, virgin fly fishing waters in the world are a 48 hour bus ride to the South. Right now, i´m looking at heading down to a town near the city of Coyhaique. March will be the temperaturewise equivalent of September/early October in Maine and im stoked out of my mind to wet a line down there. Patagonia reports to come. Tight lines to all yall stateside...
http://www.conservationfinanceforum.org/ 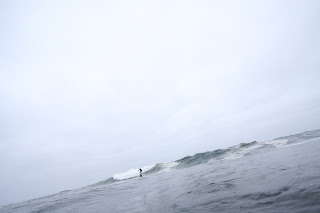 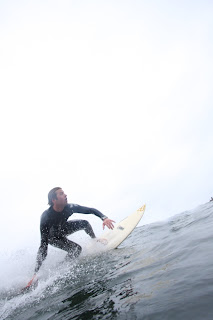 Hey man, great to hear from you! Sounds like a rediculous stretch of outdoor mania you've been experiencing. Glad to hear you're tearing it up; keep the posts coming.

morrell, good to hear from you my man. excellent work on the cutty, sounds like tricky work. i haven't seen a fresh picture of a fish in a net for a while.

keep us posted on the fishing on that side of the equator. i want to see double digit fish on the board.

Awesome post Morrell. Glad to hear someone is getting it done with a fly rod this winter!

for some reason this short vid of the Bates crew didnt publish with the rest of the text. most snow ive ever seen in my life hands down...

german browns and rainbows of the south to come...