The day materialized like many of my fishing trips, with a last minute call to a comrad who would be able to break away from the real world for a trip north. My day off would come on a Thursday, and the one individual that I knew was free was OO-Steele. Upon receiving my invite, Clark obtained a vehicle from a roommate and rolled into my place on the evening before our departure.
The forecast for the day was somewhat grim, while it was to be sunny, temps in the morning would dip to -10F and the winds would be out of the northwest gusting to 30mph. This put windchills dangerously close to -40F. We knew the risks: 8 mile ride in by snowmobile, frozen traps/reels, numb hands and feet, and nearly certain frostbite, but the potential to chase large Togue and healthy Salmon had us turning a blind eye.
Spencer Lake is categorized by the state as one of the only natural inland fjords on the east coast. The lake is oriented north/south, is 8 miles long by 1 mile wide at its widest, and boasts 3,500ft. mtns. that plummet to the waters edge with jagged cliffs carved from glacial recession some 10,000 years ago. It truely is a northern Maine gem that could only be enhanced by the quality fishery that it has.
A 4a.m departure had us unloaded on the Harscrabble Road by 6a.m enroute for the lake. As we picked our way into Spencer we came across a large Bull Moose standing in the middle of an old logging road. He casually sauntered into the woods as I made "moose noises" at him. After humoring me for a minute or so, standing there gazing back at us, he moved along. By 6:30 we were at the south end of the lake and carefully selected a cove on the west shore that would keep us out of the brutal wind that had already beaten us to a pulp as we rode down the lake. Our eye lashes frozen shut, and with a touch of frost bite, we peeled ourselves off the snowmobile. 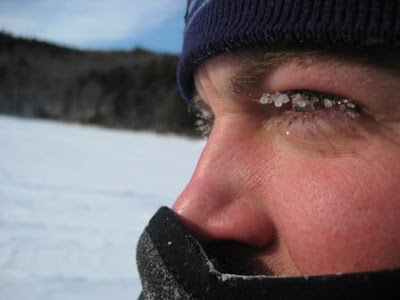 We quickly made camp and began the painful setup process. 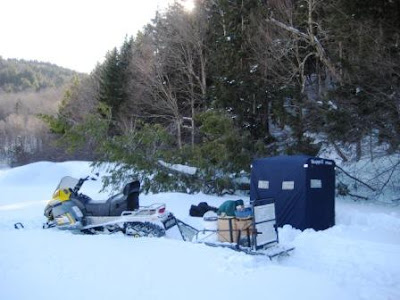 Anyone that has ever been up to Indian, or Spencer for that matter, knows that you are often unable to get your entire spread of traps in before the fish begin biting, thus making the steup process exponentially longer. This would be ok on a nice 25 or 30F day with little wind, on a day like today it began to raise the question whether we would return to the heated shack alive. After greasing several respectable togue, we returned to our camp for a traditional breakfast that surely many natives had shared along the shores of Spencer Lake hundreds of years ago. 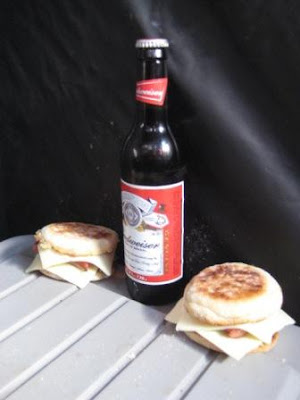 We continued to hammer the togue throughout the morning but the weather conditions began to eat away at us. We decided that a few of the togue traps (situated on bottom) should be pulled up under the ice to assist our other Salmon traps which were not producing. The process of feeding our baited lines to the bottom each time with the cold temps and wind was simply unbearable after the 15th togue flag. Strangely enough the Salmon bite never truely kicked on until after 11 a.m and it was in full swing until we departed. 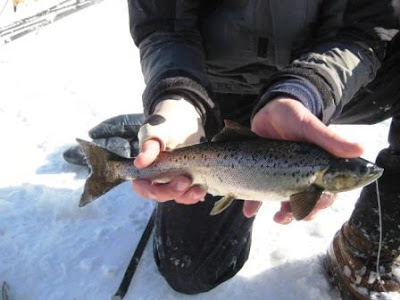 We kept a couple salmon and a togue for our respective dinners (released the rest) and decided to break camp around 3 p.m. The largest togue was probably around 21" and the largest salmon around 18", no bruisers but respectable nonetheless. The season in central Maine had begun to slow and it was nice to have some serious northern action despite the weather conditions. On our way back to the truck I brought Clark by a rather scenic spot for a few last minute photos. The sign below greeted us on a short bushwack through young pines and up over a granite outcropping, a reminder of the season to come.... 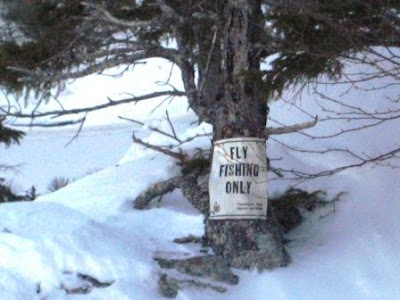 Probably a pretty good chance we'll be back there in the open water. Access to the spot is by boat only.....anyone interested? 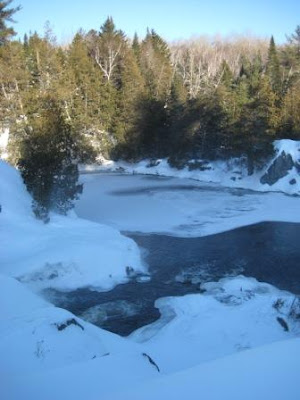 Posted by Andrew Wilkie at 9:49 AM

Email ThisBlogThis!Share to TwitterShare to FacebookShare to Pinterest
Labels: Lake Trout, Landlocked Salmon, On The Ice

speaking of epic conditions, what is the status of your homestead?

FFO, accessible only by boat? i'm in.

also, did anyone else notice the phallic nature of that breakfast picture?

looks like an absolutely gorgeous spot man. solid fish too. no doubt the Penobscots indulged in bud diesel and egg mcmuffins in centuries past.

count me in when the ice melts.

The stocking trucks will roll through mass in late march. Then I will have a shot at limp pale colored stockies...

Or we can suck it up and make a march run for steele. Seems like a pretty easy decision.