The Oceans, Plastics, and Health

Most of us are based in the NE US, and the majority of our ocean experience is in this vicinity. From my experiences in this region, the oceans seem fairly healthy, and (comparatively) void of garbage. This isn’t so in many of the places around the Pacific Ocean I have been.

In this post I wanted to highlight a major issue confronting both the planet’s oceans and human health: plastic.
The quantity of plastic detritus that is accumulating in marine environments is growing significantly. The same reasons why plastic products have become so ubiquitous in our modern life (cheap, durable, flexible, convenient) are the same ones that are causing this problem. When plastic products wind up in rivers and are discharged into the ocean they cause all sorts of problems for marine wildlife due to their extraordinarily long life span, along with how fish and sea birds mistake floating plastic for food.
UV light and wave action slowly break plastics into smaller and smaller pieces. Eventually the stuff is reduced to tiny polymers that naturally absorb other nasty Persistent Organic Pollutants (POPs) and migrate into the food web. POPs have all kinds of nasty qualities, and are quite carcinogenic.

There is likely not a shoreline on the planet that is not contaminated with some degree of plastic garbage. Here is a beach on Bunaken Island off the northern tip of Sulawesi, Indonesia. Every few days some workers at the resort I was staying at would rake the beach and bury all of the garbage in a hole they dug in the sand. 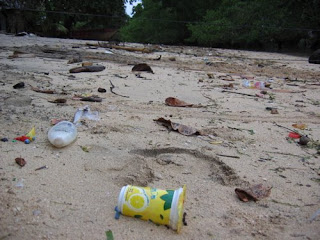 This problem is particularly acute in the Pacific Ocean in between Hawaii and the west coast. There, ocean currents form what is known as the North Pacific Gyre, a swirling vortex where trash from Asia and the Americas concentrates.

I would encourage you to watch this talk by Charles Moore, a sailor who was one of the first individuals to document the “Great Pacific Garbage Patch”, a floating mass of garbage the size of Texas.

Here is another documentary on the subject from VBS TV. Check out some of their other videos too. Totally sweet.

And a great NY Times article on the same topic.

Overall this topic is fairly depressing, and the problem is likely to get much worse before it gets better. What can us lowly fishermen do?
Well one of our most immediate impacts on adding plastic compounds to the oceans is lost line and lures while fishing. Anyone have any experience with this stuff? Or comparable products?
Posted by S. Neil Larsen at 12:27 AM

this tool is something that i think could help out a bit with loose mono, tippet, etc:

Good post Neil, I like the fact that you're switching it up and keeping us on our toes