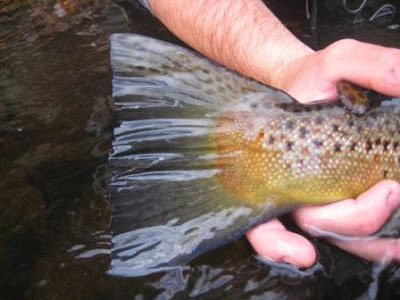 A Fish Tale For the Ages

For a couple years Jesse and I had been tossing around the idea of a trip to western NY in search of Steelhead, until this year nothing had materialized. Over the spring and early summer the possibility of a trip came up again, and again nothing materialized. I believe it was a mid-summer evening when I called Robbins and said, "Dude, we're pulling the trigger on this trip.". Robbins though startled by my intensity and determination, simply uttered "ok man".
With the trip dates laid out and the final details planned out just shy of being in writing, we set our sites on November. Our affiliation with this blog's sister site http://www.fliesandfins.com/ put us in contact with one of the Salmon River's finest guides, Dave Severson. Dave has been a long time fishing buddy of a guide in Portland that Jesse and both know, and if the pictures that the two of them produce were any indication of what our trip would be like, this trip was in line to be one of the best of our young lives.
Arrival at our hotel in Pulaski NY came at 1:30 a.m, we met Dave at Fat Nancy's at 5:45 a.m after two hours of restless sleep. We got our licenses, shook hands with Keith and Clark, and headed for the river in Dave's Outback.
We parked at a small architechturally intriguing church in the small town of Altmar and strung our rods. We would begin fishing just out of town at the upper reaches of the Lower Fly; I was literally shivering with excitement as we descended the bank to the river.
Dave positioned Robbins and I roughly 40 yards from eachother with a steep hemlock strewn bank to our backs. The water reeked of phosphorous, a bi-product of the King Salmon spawn and the subsequent salmon die off. Salmon carcasses lined the river banks and hung from the overhanging branches. Moments after our arrival I spotted a large 20+lb king salmon finning a mere six to eight feet in front of me; I was shitting myself. 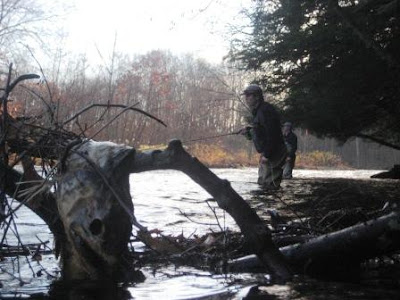 We continued to watch both steelhead and salmon jumping, slapping and finning in front of us. We both managed to land several small Rainbows and Browns, but these were either juvenile specimens, or clearly stocked fish; certainly not the fish we were seeking. This particular piece of river claimed several flies from me in particular as I had quite a few stumps and other obstructions to work around, and anytime I would get hung up, my inevitable aggressive tugging on the fly would get it caught in the trees behind me upon extraction. Frustrations continued to mount as we watched this jackass, who had attempted to slide in on our position, land a 14lb steelhead probably 20 feet upstream from Robbins. Our guide had seen enough, we would hike into the Upper Fly. 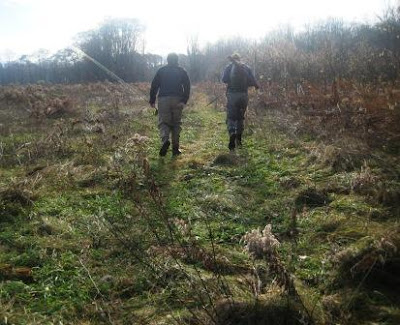 Jesse and Dave on the hike into the Upper Fly

We hiked through pastures, thick timber, and bayou-esque territory as we hoofed river-right into the Upper Fly. The other side of the river apparently offered easier access as we passed dozens of people who were fishing the opposite shore. The lack of areas to forde the river was the factor that kept people from this side of the Salmon, and our hike-in would reward us with a multitude of areas to fish. Pocket water, eddies, and various runs we worked with little luck. Our stomach's began to growl around 10:30 a.m as we hadn't eaten anything or had so much as a sip of water since 5a.m. We wouldn't touch food or water until later that evening around 5 p.m when we returned to our hotel. We operated for 12 hours on nothing but the purest fishing convictions in search of the mighty Steele. Robbins and I were hungry for a hook-up as we wandered north along the river.

Finally we emerged from the woods at a pool probably 60-80 yards in length with an excellent bit of tailwater and a fantastic stretch of fast water at the head of the pool. We took to the pool like two handsome devils who rolled into bar filled with bachelorette parties. Agressively we began dredging the pool in search of the bachelorettes, and finally I was tight. First off, I was absolutely stunned by the power of this fish. It jumped several times and then decided to run downstream with all the power and speed of casey jones' cocaine powered freight train. The fish, combined with the swift current was unstoppable; my rod bent to the cork, I was filled with panic, the fish was approaching a set of rapids, I could not lose this fish, I began the chase. The guide looked at me and said "Are you sure you want it that bad?", I looked back at him with a look that could have only said "Fuck man, we just drove 10 hrs. to get here, I've never even had one of these things on the line before, you're damn fucking straight I want it this bad!" Down river I ran (i'm shivvering while I'm writing this and I just threw a dip in). The fish plunged through several drops in the river as I gained line on the great beast. I had never chased a fish through such whitewater, a dozen fisherman reeled in their lines on the far bank to give me the right of way as I chased the fish. After a 400 yard chase, the fish simply snapped my line, the combination of jagged rocks beating my tippet and the pure power of the fish were too great. In agony I threw my hat and 9wt. into the woods; Dave slapped me on my back and said "There will be more"......in my moment of defeat I was skeptical.

As we schlepped back upriver Jesse caught a glimpse of me as he continued to flog the water, we looked at one another and he knew not to ask me how it ended. I ambled back into the water and began the ritual all over again. 20 minutes later I was tight again, the battle was short, the fish jumped and my fly pulled from it's grasp. Less angry than the first loss, I began fishing again. By 2 p.m our day of guiding was nearing it's end, we left the pool and began fishing a couple of pools around the whitewater where my first battle ended. Jesse lost his yellow egg almost immediately and remembered a blue egg pattern that was caught in the back of his fleece from earlier in the day. He removed the fly, tied it on, placed it in the water, and was promptly tight to a Brown Trout. This was all before I was setup in the pool below him. Dave looked at me and said "Your boy is tight".......indeed he was. I placed my rod on the river's edge and hustled to Jesse's aid. The fish was strong, and it was in an extremely difficult stretch of water for landing purposes. I began moving alder's aside so Jesse could chase the fish downstream. 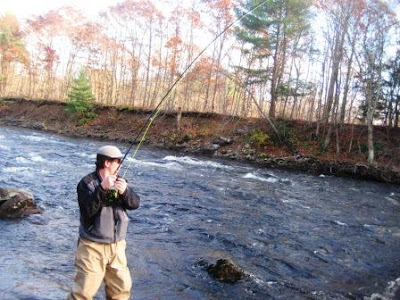 Jesse tight to a 2:15 p.m Brown Trout
After my earlier loses, I would do anything in my power to help Robbins land this fish. After a 50 yard downstream battle through several whitewater cascades, guide Dave would tail the fish in the very pool where I had been setup. The brown trout was bigger than any I had seen in Maine before; a very nice hen.....under the wire Robbins had broken the skunk, we were stoked. 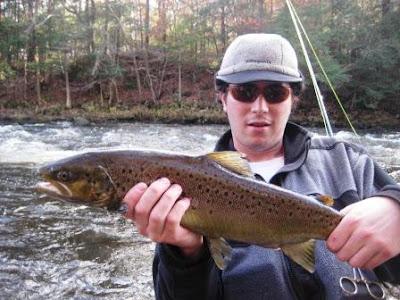 We began our walk back to the vehicle with Dave pointing out a handfull of holes for me to take a couple last minutes hacks at. None produced. Roughly half way out the trail crossed a little backwater stretch, probably 20 yards wide max with water ranging from 6-18" deep, Dave slowed us down and inspected the water. First he pointed out a Coho Salmon that was casually chilling in 10" of water, clearly it was nearly dead, but it was a good 8lb fish. We were excited but continued on. Soon we neared the end of the backwater but Dave once again spotted several hen Brown Trout grouped up around a few nests. Jesse gave me the nod, this would be my attempt, but it would not be easy with tons of overhanging bullshit and multiple logs in the water begging to destroy my chances. First cast, bogus, not far enough. Second cast, snagged in an overhanging branch, snap my leader, re-tie entire leader and tie on a yellow yarn pattern egg, Dave is sure this will work. Fish still not spooked, I'm still in the game. Third cast still not quite right, too much weight on. Remove all but one splitshot, also remove indicator. Fourth cast, good drift, Dave yells "Set it" and I'm into my best chance of the day. Moments later Dave tail grabs my hen. Skunk is off, two hens still holding in the same position, it was Jesse's turn. 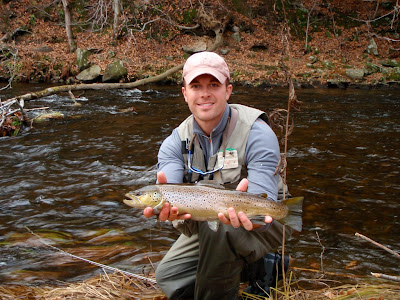 My First of the Day

Jesse was attempting a hookup of his own in this spot and Dave had curiously wandered downstream. I followed him as he pointed out what he believed to be a good male Brown Trout holding in this tiny gut between even more bullshit. I cast upstream of the tiny slot where the fish held, Dave was pleased with the drift and once again yelled "SET IT", I did and the battle ensued. I could tell the fish was considerably larger than my first, and Dave, upon closer inspection, began giving me commentary on just how good it was. This only intesified my panic. We had to cross this piece of water to avoid branches and other obstructions in the river. Downstream we went onto a floating hummock of sorts where I could work the fish into a bit of slow water. Dave grabbed at the fish, "shit" he said, "someday I'll invest in a net". I'm about to lose my shit as he misses it two and then three more times. Fourth grab was successful....what a fucking fish, my jaw just hung open. 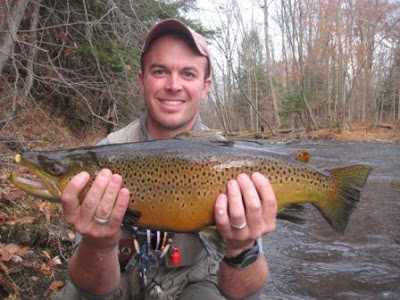 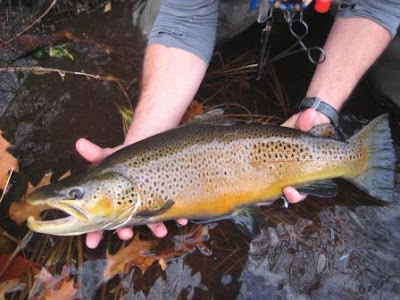 At the buzzer, what a way to end the day!

Dave gave us the nod, it was time to roll, we had ended on a serious high. As we hiked out the remaining half mile, we talked with Dave about our options the next day and emerged from the woods only to find Clark and Keith right at the head of the trail. Our addiction with the Salmon River had just begun.

Posted by Andrew Wilkie at 9:58 AM

Home of my first salmon trip.

Sure, I ended up getting bored and playing with an old shopping cart I found in the woods, but I had a great time.
Nothing like sharing a bunk with your dad and sleeping above a gutting station.