Photo by Andrew Wilkie
There is a place, far from here, where the skies are clouded, the water swift and cold, where apple skoal and grizzly do battle and where the bars whisper "Suspicious Minds" to passersby. A place were the kings are king before their spawn and subsequent deaths, when a newcomer, the great steelhead, claims hold to the river's channel. I speak of the Salmon River, some 471.93 miles from Bates Campus, located on Lake Ontario in Pulaski (pə-LASS-sky) NY, where anglers flock by the thousands, the week before Columbus Day, to have a chance at the spawning majestic kings. This is a time when anglers and fish are so numerous that sunlight struggles to reach the ground. However, I am not here to tell you a tale of Kings, but a story of the mighty Steele instead.

My tale, our tale, started 7 moons ago, a quick witted Wilkie, along with Sir Robbins, had made fast work of planning and of the proper Hotel 8 accommodations. On this Thursday, Wilkie arrived on my doorstep in the waning moments of daylight, looked me in the eye and whispered "steele." I simply nodded, gathered the proper weaponry and loaded the 4-Runner. A quick food supply stop was in store and we were on our way to Portland, where Robbins eagerly awaited extraction and greeted us with a sense of urgency in his driveway. We headed to North Andover to make our last acquisition, the legendary tuna hunter, Mr. Lane. I had only met him once, but his reputation precedes him. The final four were united and open road lay ahead. Next stop: Salmon River.

We arrived near 1am and quickly moved from travel to the preparation of our fly rods; lessons in leader tying were given by Robbins while we relaxed, two to a bed. Soon after Lane went over the snoring etiquette, we laid to rest at 3am. A 5:15am wakeup call was not far off, but the giddy excitement had us all rearing to take to this renowned fishery. Seeing as none of us had the least bit of experience with the river, we kept our expectations low, but always dreamed big. Wilkie and Robbins took to the water with a guide, picking his mind on patterns, techniques and locations, on knowledge that would certainly be worth the price tag. Lane and myself would endure a day on our own, angling a new body of water with light spirits and the attitude of "we have no idea what were doing, but we are sure gonna give 'em hell!"

Licenses in pocket, rod in hand, we left Robbins and Wilkie just after 6am with their guide at Fat Nancy's (a Home Depot sized tackle provider). "Well," said Keith, "guess we will head up river." "Guess so," I said, "why not?", when you got down to it, we had no idea what we were doing or where we were headed but we sure were excited about it. But it was not meant to be a fools excitement, there was an essence in the air. The increasing numbers of "Salmon Cleaning Stations" led us to believe that our short trip upstream to Altmar was a good place to start, and it was. Less than ten minutes on the shore and Keith had already hooked up with his second steele of the day, on a pink egg pattern. The first strike was short-lived, but this second fish had pulled the line tight and sat strong in the current. Landing net in hand, I was trying to keep my cool, but was so jacked up my hands were shaking. The fish turned and took to the current, making light work of Keith's 8 lb tippet. This was a promising start, and after a full day Keith had close to 5 hookups and I was still dredging bottom for my first action. Wilkie had checked in with a report of some nice browns and small salmon. Steele had been hooked but alas none had been landed. 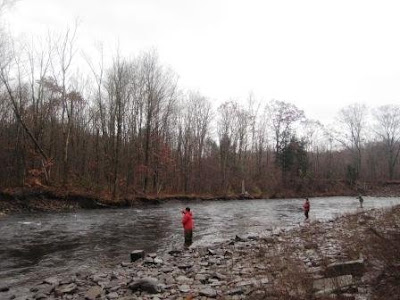 Around 4 o'clock, some 10 hours of fishing later, Keith and I were working a hole right close to town, or what would be considered the town, comprised mostly of fishing shacks, fly sheds, dilapidated homes and fish cleaning stations. My rod went tight and I looked at Keith, "FISH ON!" My first steele. The fish took a quick few runs into the current as I tried to traverse the terrain to keep from losing ground and control, but as I would soon learn, I was never in control. Remarks from fishermen; "Remember to put a little extra in the collection box on Sunday," "Savor the moment" as well as some talk about the size of the beast tethered to the end of my line. With a flick of the tail the fish headed under the bridge. I did all I could to slow it in a futile attempt as my drag ceased screaming and my line went slack. She was gone, and most likely forever. Damnit.

Wilkie and Robbins emerged from the woods with their guide and day one was done, no steele brought to net, but ample action. A night of stories and beers lead to the utter domination of karaoke at the End Zone, with classics such as "Suspicious Minds" and "Amie". 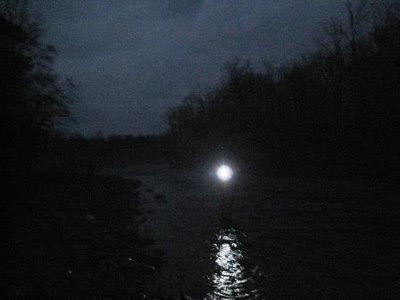 Travel by night, fish by day

Alarm: 4:45am, it was time to nurse our hangovers with a 1.5 mile hike into a hole in the upper fly (one of two fly fishing only zones). Robbins and Wilkie had seen this hole the day before and the guide claimed victory to any group that could hold it. The magnificent four were armed and ready, I took point at the top, then Lane, Wilkie, Robbins. We were set. The fishing started slow, rain set in around 7am and lingered till 10am. As it started to clear, a pow-wow was called and apple skoal distributed among it attendees. Not more than 15 minutes passed when Wilkie was tight. Steele on the line, a true battle ensued as the fish took to the current and with it, the battle, downstream. Robbins pursued, a scampering Wilkie would backlash his line requiring a reel disassembly, keeping the fish on, the fine work of a Registered Maine Guide. However, disappointment prevailed as the fish broke off a quarter mile downstream. Not long after, Keith shouted "STEELE!" Wilkie took net, Robbins camera. Staving off encroaching anglers, I bit my tongue as the party followed yet another fish around the corner and landed a gorgeous 8 lb. steele in the rapids. The wait had been long, but Keith had delivered an amazing looking fish. 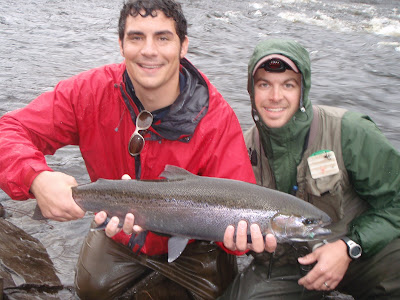 Keith and Wilkie with 8 lb steele

Keith soon found himself in his backing as he struck steele again. He was able to hold this 10 lb steel to the big pool, increasing landing chances tremendously. 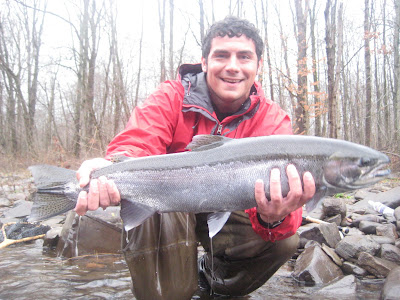 The afternoon continued hot and cold with sets of hookups. Keith hooked 11 fish, and landed two. Wilkie 0-6. Robbins and myself, who were down but certainly not out, combined for 0-1. Another long 10-hour day on the river, but steele had been tasted and our wits had been tested. "Mandatory 3 hour nap", lulled Wilkie, and none could complain. Five hours later we awoke at 9:30pm, no wakeup call, but I wasn't complaining. Pizza ordered, delivered, consumed, beers crushed, and re-rigging gear put us back in bed at 11:30pm with the safety of Jesse's phone alarm set for 5:00am.

We had planned a short morning, as it was a traveling day. It was our last chance and Keith and I had decided to show Robbins and Wilkie one of our holes. Not everything can be bought with a guide, you know. Keith and I boast ourselves as self-made Salmon River anglers, just GGT (God Given Talent). The hole was right upstream from my only solid action on day one. It was very accessible, as long as we were the first there and we were. Robbins broke his slump early, hooking a nice steele that peeled off line in some good runs before it broke off. It was unfortunate, but we knew the fish were here and going on egg patterns. I was next on steele. Hooked. The fish raced aross the river 25 yards, and gave an incredible aerial display, something we had come to expect. Over two days we had learned that hooking the fish is only 14% (4 landed/ 28 hooked) of the battle, while the remaining 86% laid in landing the beast. Seven minutes into the fight and the fish was still on. It was getting tired but the landing was yet to come. In a moderate rapid section, Lane and Robbins displayed tremendous skill and brought to net our 3 steele of the trip. Well done, boys. 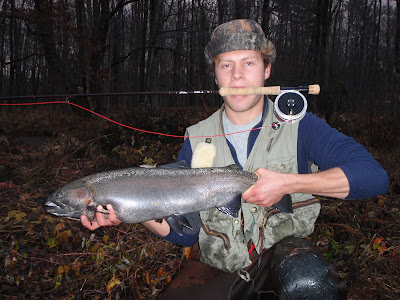 We were on the fish and Jesse soon found himself in another fight. Being day three, we had honed our skills. Robbins let the reel scream, while ready to gain line just a soon as he could. "When she wants to run, let her go," Keith had imparted on me time and time again throughout the weekend. It was true, fight the fish but you are not going to stop her if she wants to go, just play her out. Some immaculate execution on the rod and some handy net work brought our forth and final steele of the trip. 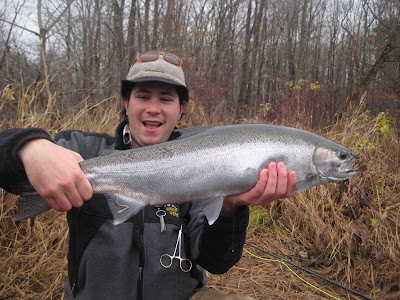 Wilkie, owner of 8 lb. brown on day one, had a mulititude of opportunities but was unlucky not to taste steele. We had one all but landed for him that morning, but the net simply was not big enough for the swift current capture.

All of us had hooked steele and I think it is safe to say that we are all hooked on steele. With over 25 fish hooked and 4 landed, 8 lb tippet could be bumped to 10 or 13 and would return more overall fish landings. An epic weekend on all accounts, I was honored to be a member of the expedition and look forward to our next trip...may it be steeleheading?

"Dimension" - Wolfmother
Posted by Clark Winchell at 9:28 AM

Damn son, well written. Fantastic post. I will have a "Day 1" post soon for my day w/ Jesse and the guide.

Ok, just watched the video....dude the opening to that thing was exactly the way I described it to you that day....fucking phenomenal film bro!

I read this last night before bed ang again this morning after waking up. Phenomenal steele all around.

We're caught in a trap, we can't walk out, because we love steele too much baby!

double O, great writing my man. all of your words are spot on. somewhat hard to believe we'll be back there in a week's time... hard to believe, yet comforting.

i wish you guys could see the video on my comp, the quality is a hundred times better.

i'm not sure if anyone who reads/watches this will be as psyched as we, but just wait til they taste some steele

Hey Jesse,
just the right thing for an crazy addicted. Thx, for the linking ffn up - i´ll soon create a link page with other guerilla sites including yours of course. Keep it up. cant wait to see more!
Tight Lines,
Steph