Of Hippies and Bluefin- The Caleb Garling Story

Men- I added some cell phone photos from Greg. They don't really do the fish justice but it's all good. I'm heading to the canyons tomorrow night for one last offshore trip.

Pete Lynies got married last night. I got drunk. The wedding was a beautiful ceremony and we were even given jars of Deb Lyneis' world famous preserves as a little take home gift after the reception. I sampled my jar of rasberry preserves on a toasted portuguese sweet role this morning and let me tell you it was tremendous. But that stated, this story is about fishing.

The Lyneis wedding brought with it the return of several fishing legends that had since left for the west coast. Jeff Critchlow, currently attending vet school in California, would be returning for the party and Caleb Garling, the man who put me on my first 20+ inch fly rod trout, would be flying out as well. I got a text message from Caleb early last week requesting an offshore adventure. He had been reading about this season's successes and was eager to experience solid hookup action. A veteran of the offshore scene, Caleb had put blood on the deck before. I was confident that we could get the job done. A quick check into schedules confirmed that Critchlow would not be arriving in Boston until Saturday morning. He was out. It would be Caleb, the Legend Greg Smith, and me on this bluefin trip on Friday 10/10.

Of course, Caleb had scheduled a night of boozing at the Barking Crab the night prior to our trip east. While not generally recommended, I knew Caleb could handle this. He and The Legend would be driving down at 230 AM and we would leave the dock by 430. On the morning of the trip, I woke up at 230 and couldn't fall back to sleep. A quick check on the weather was pleasantly surprising. The prior night's 10-15 knot forecast was downgraded to 5-10 going to flat. Awesome. I shot a quick text to Greg and he confirmed that Caleb had mobilized after 1 hour of drunken sleep. All systems were go and the men were headed towards the cape. I went out to the dock and began loading the boat. I watched the striped bass zip in and out of the dock lights. They were everywhere. Watching the stripers feed got me fired up. It was go time.

The men arrived and we were off the dock quickly. We motored through the Waquoit jetties and east over a black sea. The men looked good for having not slept much. Greg offered me a bite of his breakfast burrito. I declined. Shortly into the trip we realized that no one had brought a camera. Figures. We rounded Monomoy and the short chop we had experienced in the sound was replaced by rolling seas. The wind was dying out of the northwest but the seas were still built up somewhat, but manageable.

My plan was to fish mostly ballyhoo and only two spreader bars. At this time of year, herring begin to show in the Great South Channel. Once the herring show, the tuna start to feed on the herring over sandeels and consequently ballyhoo become the preferred bait over spreader bar rigs. As we arrived in 135 feet of water, I slowed the boat and the spead was deplyed. There were birds working sporadically and Greg saw a fish jump. The sounder was alive with bait. Conditions looked good. An Islander/ballyhoo combo was deployed off each rigger and flat line spreader bars were run tight as teasers. I began to rig up naked ballyhoos for the inside lines while caleb and greg scanned the horizen for life. This was going to be a very professional 6 line spread. If anything we were going to do it right on this trip.

"Crack". As I'm rigging up a naked ballyhoo the port out rigger clip snaps and we are tight to a beefy tuna! In the insuing chaos I knock over a tackle tray spraying rigging beads and hooks all over the floor. Fish on boys!! Caleb, is first on the rod. I tell him to grab the fighting harness from the back livewell and get suited up.

Meanwhile the drag continues to sound. I look at the spool and we are halfway down with line continuing to leave at and alarming rate. This fish is running hard! I push the drag up past strike and we are still losing line. Last week a 1000 pound fish was caught on a trolled ballyhoo. I'm starting to think this could be a giant. 1/3 of the spool left. Time to turn the boat. I ask caleb to turn the boat to the starboard while I crank at the fish. After ten seconds of chase the fish slows. It's not a giant. We're ok. Caleb is strapped in and goes to work on the fish. He has a lot of line out there to bring back. Greg and I begin to antagonize him but Caleb stays on his game. Soon the fish is within reach. I grab the leader and Greg sinks the gaff into a 125 pound fish. Game over! We've only had lines in for 35 minutes and we already have a tuna in the boat. What a start to the day. 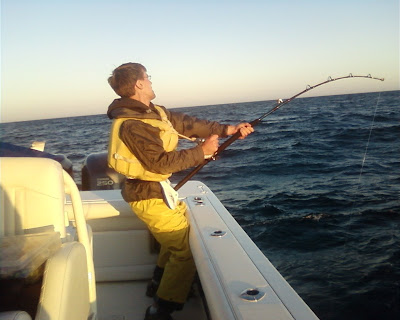 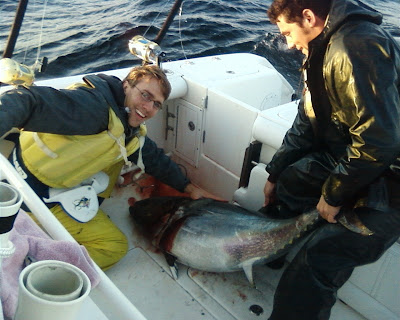 Greg works to get lines back in the water while I process the fish. Caleb's job is to open us all a beer. We get the fish cleaned and into the fish box and have two Islander/ballyhoo combos and one spreader bar back in the water. I'm thirsty and am really looking forward to a sip of tasty beer, but I would have to wait. Another ballyhoo line get's hit hard and we are tight to a second tuna. This time Greg is on the rod. We do the tuna dance a second time and Greg is having a very tough time with this fish. The bluefin tuna is a totally different animal when hooked on a ballyhoo compared to the bulky spreader bars. They fight much much harder on the small single baits. Greg gets worked over pretty good by this fish and at times he looks like he wants to relinquish the rod. Knowing that such a move would bring ultimate humiliation and unlimited shit talking, he pushes on and the fish is landed. The team executes a smooth release and we are two for two and it is only 7AM.

We get three lines back into the water and begin to relax a bit. Beers are freely consumed and the seas are flattening out. I hail my buddy Alan on the radio and vector him into our action. He has a charter on board and they have not yet hooked a fish. It is a gorgeous day, one of the nicest I've fished all year, and we're having a good time. Before I know it the time is 11AM. We haven't experienced much action since the morning bite. Alan let's us know that he's heading in and indicates that the giant fleet is out a little deeper. We head in the direction of the fleet to see what they are up to. Caleb falls asleep on top of the t-top. We've got the radio playing. Life is good. Life is really really good. 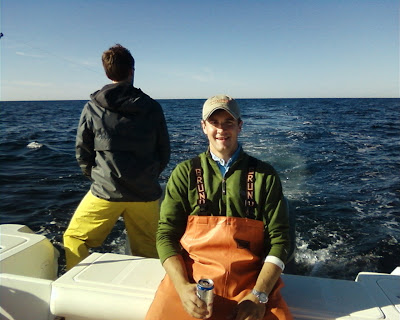 Out in the fleet, we get bit again. This time the captain is on the rod and I show the boys how to put the hurt on a tuna. After some impressive runs, the fish is landed and it is clearly the biggest of the day. I would estimate it in the low 60 inch class, a nice fat fish. Again the crew executes the release perfectly. 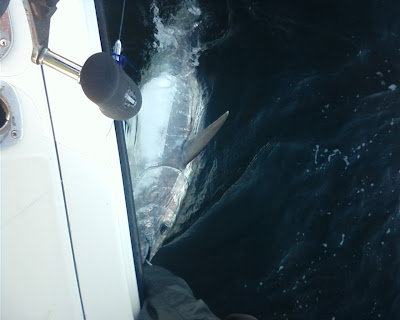 We work our way back to the west, but at this point we are running low on beer. At 230, we pull the plug and head home. Another sucessful tuna trip, maybe the last of my season. But we went out on a high note. Sushi tonight anyone?
Posted by Keith at 2:37 PM

Lack of pictures.....who cares. Another epic outing; by now we're all believers. A fantastic bluefin season no doubt!

Wow, I totally should have skipped out of work/school on friday.

hell yea. can you air mail me some sushi?

caleb, poseidon was impressed with your efforts and rewarded you appropriately. hope all's well man