The fish get a day of rest too

Last week I met up with the legendary BFCa Steve Hallas and a few other Bates alums for some burgers and beers down in the West Village.

Four McSorelys and a Bistro Burger later, Hallas turns to me and says, "Do you want to go sailing this Saturday? My dad wants to go."
"Sounds good, let me know the details"
"Just to warn you, he may make you drink beer."
Saturday morning rolled around before I knew it. A jaunt across 125th on the M60 and an hour-long Metro North ride later, I was cruising through the mean streets of Westport, CT in Steve's black Saab, doing my best to blend in with the locals.
As I stepped out of the car in the marina parking lot, a man and his wife strolled by walking their golden retriever. The situation seemed completely normal except that the man was wearing ultra-tight black stretch pants - the kind that are usually used to accentuate a camel-toe. In this case, the fruit basket was clearly visible and was an unwelcome sight on such a glorious day.

I looked to Hallas to provide an explanation to this situation. Down in Harlem this man would have been ridiculed by the locals and possibly received a beat-down. Here, this is how a well-off couple spends their Saturday morning.

Questions flew through my mind. Was did this say about the town where Hallas spent his formative years? Or was this just one more layer of intrigue added to the mystery of Hallas? 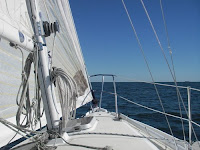 I didn't press the matter further as we proceeded to The Windfall - the Hallas family's 25' Ericson sailboat - tied up down at the dock. Steve and I primed the vessel for departure until Joe Hallas arrived with ham sandwiches and adult beverages in a soft cooler.
We left the harbor around noon and cruised up the coast past Black Rock and Fairfield. The sound of wind filling the sails and waves lapping on the bow put me in a hypnotic trance. I could think of no better way to spend a fall Saturday afternoon. 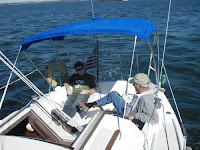 I was so relaxed when I left Westport that I fell asleep on the train and woke up at Grand Central, having missed the 125th stop. It was a minor inconvenience, and a small price to pay for perhaps my last day out on the water this season. 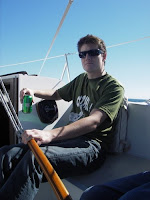 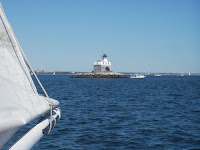 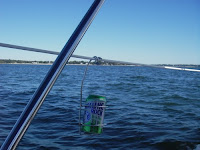 Email ThisBlogThis!Share to TwitterShare to FacebookShare to Pinterest
Labels: Sailing

s, nice post man. we had quite a weekend of weather up here as well. nice call on the green tabs

I feel like Old Man Hallas must be a complete legend. I need more description on him. AT any point during the trip did he take a bimbo down into the cabin and have his way with her?

Neil that was a great post. I had forgotten about mr. black tights until you brought it up again. Its a shame we didn't get a picture of that. Just to clarify for everyone reading this story, that was not my dad.