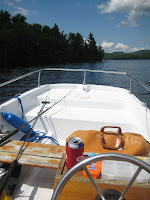 J. Lance Robbins has been on me for a while now to step up to the plate and get some fishing stories posted here on Solid Hookups. I'm woefully overdue, and for that I apologize. I'll preface this by saying my written stories never turn out as vivid as they exist in my mind, and I wager this is the case for just about any fisherman not named Gierach.
The problem is that a fishing story is as good as it's ever going to get when you're talking around the fire that night, when the details are fresh and seem to fill themselves in, and usually there are supporting characters present around said fire to interject what you've forgotten–or in many cases intentionally failed to mention.
But then when you wake up in the morning somehow the details just aren't right. And you can't quite see straight. And you're sleeping on the lawn. And it's not your lawn. But that's a whole different part of BFC fishing adventures, and for a different post. So, for now, here's a delinquent report on a trip to the Connecticut Lakes this summer.
For two weeks in early July I was able to sequester myself in the very northern reaches of New Hampshire where my Dad and I have a fishing camp. This is a recent addition to the family, and so I was itching to get up there to set up camp and test the waters, and for once I use those phrases non-metaphorically.
Our place is on the 1st Connecticut Lake, on the east side where it's isolated from the town of Pittsburg and Route 3, and surrounded by trees and streams. It was ten days of solitary living, where daylight was bookended by breakfast and dinner grilled on the open flame, and the hours in between were at my discretion. Nights were spend gazing at the stars, with a cigar in hand
and a tiny radio broadcasting the Red Sox on an AM signal out of Hartford, CT that would come in and out as the clouds shifted. 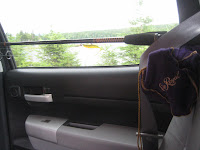 I had my 5wt Temple Fork, two spin-rods, my canoe, our 14' whaler, and my dad's truck with which to haul it all. The TF stayed strung up throughout the trip, only occasionally broken down in half and laid across the dashboard of the truck. It looked like it was an included feature on the Tundra, and if I had the time (and/or spoke Japanese) I'd tell Toyota to include it as an option on future models. The passenger seat functioned as my tack
le box, and two spin-reels swaddled in Crown Royal bags fit perfectly along the window in keeping with family tradition. 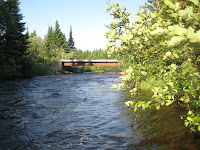 For the first days I fished a small stretch of the CT River where it flows between the 2nd CT Lake into the 1st CT Lake. It was predominantly little guys, but since it seemed like I hadn't really wet a fly line since Bates it was enough to get the rust off the fly-casting elbow and remember how to present a dry fly and not drown in waders. Important life skills. 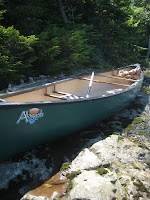 By day five I was finally feeling like a fisherman again and took the canoe down the lake to where I'd heard a stream inlet the day before. In my mind this was the perfect spot, with fresh, cold water coming down off a mountainside, a tucked-back bay with plenty of tree cover and a number of submerged rocks that screamed "habitat." For over an hour I wet-waded around and hit every dark spot I could find with every fly in my box, and got absolutely nothing.
I was just about to head back to the canoe when I made the fly selection I often do when getting skunked, the Olive Bead Head Wooly Bugger, or the "Aw, Fuck It" fly as I've taken to calling it. This is about one step removed from spin casting, but I tied it on and hucked it towards a table-top rock about 20 yards out, with a big, dark bit of water behind it. I hadn't stripped in more than 6 feet of line when it got absolutely slammed by the best rainbow I've ever hooked in New England, and she took off on me. It was a long, zig-zagging fight and she jumped twice on me, both times getting more even more over-excited and anxious to get her to the canoe. I finally got her to the boat and in my hand, a beautiful, fat and vibrant trout. And then as I reached into my vest to grab my camera in a vain attempt to record my solitary, witnessless fishing highlight, she kicked once, jumped into the air, snapped my tippet, and in slow-motion disappeared back into the water with my fly still in her lip. Awwwww, fuuuuuuuuck, itttt.
And I was left staring blankly at the water, astounded at my foolishnes and with that kind of exasperated feeling you get when you think of the perfect thing to say to a beautiful woman 10 minutes after she's left the bar. Helpless, heartbroken, and with a story to tell but nothing to mount in your den.
Posted by Chet at 10:41 PM

cpsc, great post. it has been too long since i have heard a fishing story from you. perhaps even longer since we shared them over an open fire. i sit here in my cubicle with a smile, chuckling and will now start my day by going to a meeting and not saying anything.

no excuses this summer, we must get into the woods together. or into the (driving) whiskey.

i can only guess how many fish i've taken this summer on a bead head olive wooly bugger. that fly just fucking works.

Chet, a very enjoyable read. I plan to make a trip down to NYC in November. Let's plan to meet up.

the biggest bass i had taken all season showed up with similar schenanagins. great little story there.

That is the single most successful fly in the land. Sick story

Chet, I would also like to commend you for your absolutely stellar presentation last spring in Lynne Lewis' short term class and the one on the Onion Atlas later that afternoon. Although I was greenfaced hungover in the back for both of them, it was awesome to see some Onion humor have the balls to push Bates' p.c. boundaries to the absolute max. Absolutely hilarious