The Mighty Mousam & A Birthday Brownie 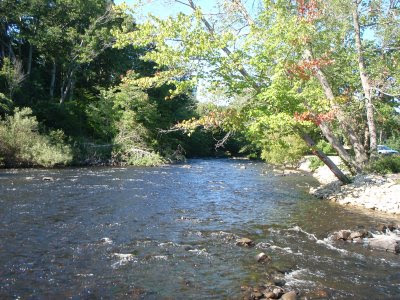 It's great just to go fishing.

I hadn't visited the Mousam in Kennebunk for a while - since mid June I think - and I wanted to throw some line around, so I-95 South it was, exit 25. The weather has been just amazing in the past few days; temps in the 80s and breezy. My hopes for any solid hookups were obviously there, but small and that was fine.

I fished the Mousam for the first time two falls ago. It's open year round which is amazing and is about 40 minutes south of Portland - a great combination for anglers living in the "big" city. The stretch in question is in a pretty urban setting, and is only a third of a mile long, but it offers superb trout habitat. The stretch is stocked in the spring and again in the fall and naturally those are the best times to get into some fish, but fish can be caught year round. It took me at least a half dozen trips to get into a fish, and damnit did it feel good when I got my first brown out of there, in a chilly April day in 2007.

Since then I've had some pretty decent luck there. The brood stocking last fall was really fun and I had 4 consecutive, multiple fish days, the first of which I brought 9 to the net, all 14"+. Petey got into his first browns and rainbows there during last fall. There have been more fishless days since then, but I can confirm that there are fish in there and that may be half of the battle.

Today I was looking to fish and a return trip to the Mousam seemed appropriate. The water was a little higher than I expected but the small pools and runs were there and I tossed a white, then olive bugger around for a bit, then put on a couple nymphing rigs and worked my way up the river from the parking lot.

It was hot. Water temperature was 72 degrees. Air temp 85. Hot. My hope for a fish was falling, but I was enjoying getting reaquainted with the river and hit many little runs as I fished. I wondered if a fish would have enough gusto to chase a bugger or even feed at all in the hot summer sun. I wondered if a terrestrial would produce a rise. Was I fishing appropriately? Was I fishing hard enough? Could this outing of fishing actually turn into catching? Should I call it a day? What was I doing? Swinging a bugger around here and there, hoping for a hit... could that actually work in this weather, in these conditions?

I just wanted to go fishing. I was fishing. I was in a pretty river on a marvelous day, enjoying the freedom of the water. What else needed to be said? I noticed two younger kids with big baggy shorts, sideways flat-brimmed hats and a spinning rod that looked like it could've caught bluefish messing around up the river from me. They were fishing. They were having fun too. It didn't really matter what I was doing beyond fishing. I was happy and continued on.

I came to a stretch of water on river left that I got a nice brown out of last fall and fished that. I had no luck there so continued upstream and then noticed a triangular piece of flat water behind a rock that formed between two faster currents. A large, flat rock that was out of the water by a foot was nearby so I climbed up and prepared to cast. It was a pretty fishy looking spot, not that that really means too much besides you fish it.

Two casts from the rock into the triangular piece of water with the one olive bugger I had left in my box and then the flash that gives you butterflies came, along with an aggressive hit. Bingo bango, fish on. I couldn't help but smile. I jumped down off the rock and kept tension on the line. I got a look at the fish and it was a trout. I was ecstatic. I worked the fish out of the faster water and got down on my knees in the river as the fish came to the net. 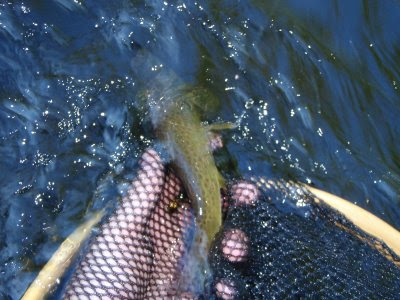 A quick picture and the fish took off. I stayed there in the middle of the river on my knees for a moment and took it in. Then I went fishing. 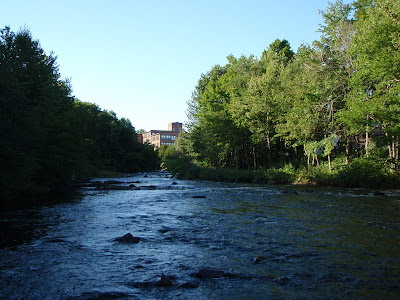 you guys sting any?

of course we did

Gotta say you are some prolific and fishy mofos. Keep up the good work.

Next time I'm in Maine I'm lookin you up.

wook, nice to hear from you man. i check buster just about every day.

shoot me an email whenever: jesselancerobbins@gmail.com