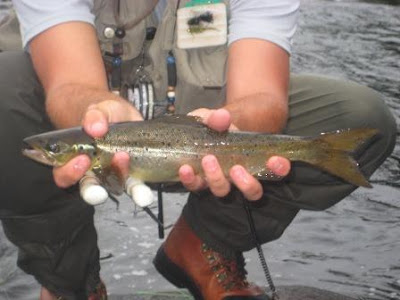 Every fisherman experiences the highs and lows of fishing success; I certainly haven't escaped that cycle. With recent fishing being absolutely out of control, it was only a matter of time until I was brought back down to earth.

We started early, 3:30 a.m to be exact, and we were enroute to the Kennebec River at 4:30. We decided to scope an access point on the south shore of the river that would save us some 15 miles each way when accessing a particularly pool filled stretch of river. The last mile was rough but the 4-runner was up to the challenge; parking spot acquired, distance to river: 50 yards......the day was starting well.
Not only were we close to the river, we also were extremely close to two major tribs that would provide fishing ops once the river rose at 11 a.m from 325 cfs. to a powerfull 7500cfs. The flies that have produced fish so easily over the previous week and a half suddenly were useless. Stimulators and buggers.....might as well not have had any in my fly box. Instead this cloudy and extremely buggy morning demanded the technical methods of nymphing and the long swings of brightly colored streamers.
Several nice Salmon up to 18" and a few respectable Brookiesup to 15" were brought to net before the water rose at 11. The fishing at our secret go-to hot spot proved to be just as slow, with only 4 Brook Trout around 12" landed. The fish in that trib were equally as picky, only offering on the smallest dry flies. We still managed some quality fish, but it actually felt nice to have a more normal day to ground me from the recent hot streak. Back out on the water on Labor Day I suppose....... 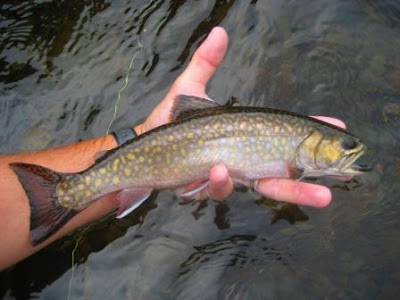 what did those fish in the pics take for flies? still a good day of catching anyway.

gotta get out to the water and get myself a good skunk to level me out.

and if you ever want to get brought back down to earth, i'll body slam your ass right quick